Dr. Eduardo Martínez, director of the state group BioCubaFarma, affirmed on Twitter that the island’s scientists are observing “carefully” the reports on the behavior of the new strain, and that “if necessary” they could develop the vaccine quickly. 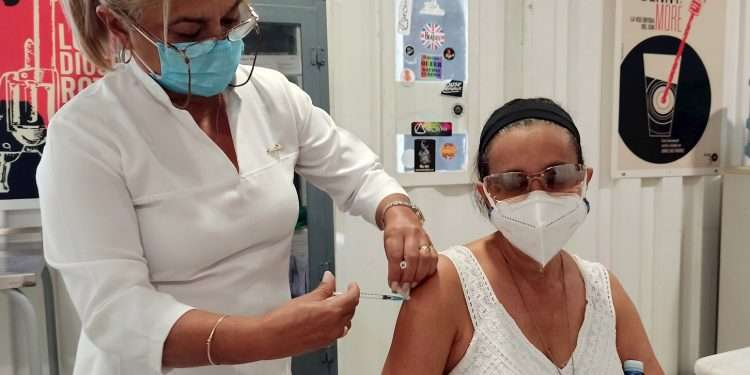 A woman gets the Cuban COVID-19 vaccine, in Havana, Cuba. Photo: Ernesto Mastrascusa/EFE/Archive.

The BioCubaFarma business group, of the Cuban biopharmaceutical industry, assured this Tuesday that it is already designing a specific vaccine against the new Omicron variant of the coronavirus, and that it can develop it in “a short time.”

Dr. Eduardo Martínez, director of the state entity, affirmed on Twitter that the island’s scientists are observing “carefully” the reports on the behavior of the new strain, and that “if necessary” they could develop the vaccine quickly.

In another tweet, the official added that, even with that capacity, “now the most important thing is to follow the vaccination process, including the booster dose and following the measures.”

Cuba has three COVID-19 vaccines of its own — Abdala, Soberana 02 and Soberana Plus — with which it is carrying out an advanced immunization campaign. As part of it, more than 28 million doses have already been applied in the country and more than 9 million people have completed the vaccination scheme, over 82% of the island’s population.

In addition, the administration of the booster doses has already begun, with a view to increasing immunity due to the time that has elapsed since the last injection and the appearance of new variants of the coronavirus. So far, more than 327,000 people, mainly from risk groups, had already benefited from these doses, according to official data.

Cuban vaccines have not yet received the endorsement of the World Health Organization (WHO) for their emergency use, although the process is already underway. Outside the island, they are already being used in nations such as Venezuela, Nicaragua and Iran, whose regulatory bodies did approve their use.

The WHO has classified Omicron as a variant “of concern,” for which it has asked to accelerate vaccination and strengthen surveillance. It considers the risk of transmission to be “high” given the speed with which the variant develops new mutations that are potentially more resistant to vaccines and more contagious.

Against this background, the Cuban health authorities announced this Monday that as of next December 4 they will apply the mandatory one-week quarantine for travelers from South Africa, Lesotho, Botswana, Zimbabwe, Mozambique, Namibia, Malawi and Eswatini. Travelers from those African countries must also present a complete COVID-19 vaccination scheme, the negative result of an RT-PCR test carried out with a maximum of 72 hours before the trip and another test of that type will be applied here.

Meanwhile, those who come from Belgium, Israel, Hong Kong, Egypt, Turkey and the rest of the Sub-Saharan African countries will be subject to the same measures as the previous ones, except for quarantine and RT-PCR on the sixth day.

Similar measures are being applied by other nations to contain a rapid spread of Omicron, which also has already been detected in countries in Asia, Europe and the Americas, such as Canada. Meanwhile, pharmaceutical entities such as the Pfizer company and Russia’s Gamaleya Center — responsible for the Sputnik V vaccine — have said that they are able to update their drugs to make them more effective against the new strain.