The first phase is estimated at more than 1.5 million cubic meters, which will cover the six most important sectors of the beach resort. 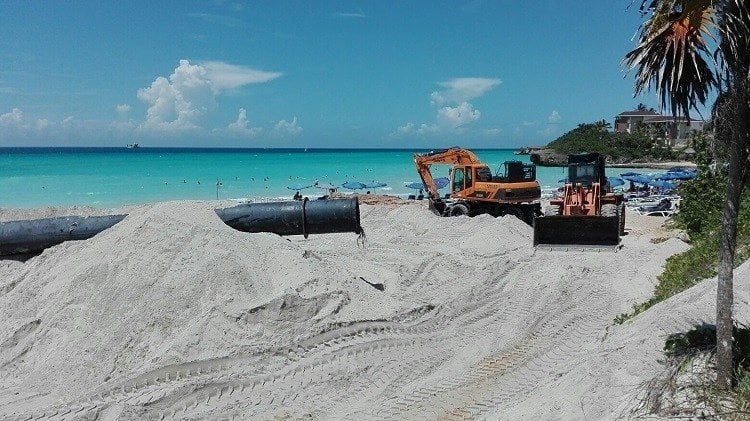 The first phase is estimated at more than 1.5 million cubic meters, which will cover the six most important sectors of the beach resort. It is an engineering work that is executed for the first time with Cuban technical means and has a budget of over 14 million pesos, according to the Radio Rebelde website.

Once all its phases are completed, it will be the largest project of its kind executed in Cuba to date.

Pavel Morales, a specialist in the Coastal Engineering Division of the Ministry of Science, Technology and Environment (CITMA), said that “last generation means” are used as part of the so-called “Tarea Vida,” the Cuban government’s plan to face climate change

Morales explained that the first intervention is carried out on a strip of beach that links the Ocean Vista Azul Hotel with the Meliá Las Américas and so far they have advanced about 200 meters. The estimate for this section is 153,000 cubic meters in 25 working days.

The work uses sand “very similar” to the characteristics and color of Varadero’s. Different Cuban institutions, such as the Institute of Marine Sciences and CITMA’s Gamma enterprise, are participating in the certification of the sand.

The first phase will benefit a total of 12.5 kilometers of the beach, and includes the dumping of 35,000 meters of sand in the Marlin Marina, in Cayo Blanco. According to specialists, “if the entire budget demanded is available” its completion is previewed for early October.

The area of ​​the former Oasis Hotel, at the entrance to the Hicacos Peninsula, is part of another beach regeneration project, for which no less than 129,000 cubic meters of sand is required. In addition, other works planned for 2020 will be carried out, such as the demolition of old structures that functioned as erosive agents and the construction of new breakwaters and a breakwater at the end of the beach.

Varadero, Cuba’s second tourist destination after Havana, annually receives more than 1.5 million visitors, is among the 10 most popular sun and beach destinations in the world and is mainly demanded for its white sand and the warm blue waters of the Hicacos Peninsula, where it is located.

In its 22 kilometers of sand and dunes, it has 52 hotel facilities, 83% of them managed and marketed by foreign companies such as Spain’s Meliá, Iberostar and Globalia, or Canada’s Blue Diamond, which also develop significant investments.

The authorities recognize that the beach “exhibits a moderate erosion process.” Therefore, between 2013 and 2017 it already received a volume of 53,530 cubic meters of sand to restore 2.5 kilometers of beaches. During this period, work was also carried out to control the erosion of the dunes and set guidelines for hygiene, infrastructure, services and environmental education, according to the environmental services center of the province of Matanzas, to which Varadero belongs.

Cuban president meets with relatives of kidnapped doctor in Kenya

Goyo Montero: "In Cuba I learned on many levels"