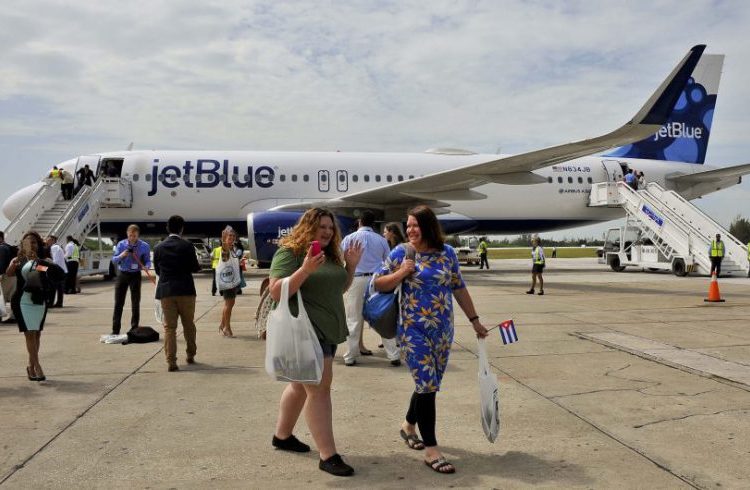 One of the offices is located in Terminal 3 of José Martí International Airport and the other in a commercial center on 23rd Street, in the area of El Vedado, where other airline companies have their offices.

Robin Hayes, executive president of JetBlue, said he was “delighted” with the inauguration of the ticket sales installations “one year after having made history, surrounded by colleagues and partners.”

Hayes recalled that the first U.S. aviation company to carry out commercial flights to Cuba in 2016 after more than 50 years started flying to Cuba six years ago with charter services.

The executive pointed out that the objective was to operate commercial flights to Cuba once it had the authorization and thus offer “a personal, useful, simple and affordable experience” for Cuban travelers.

Meanwhile, the business, risks and commercial director of Cuba’s Aviation Corporation, Ibrahim Ferradaz, said that the opening of these JB offices and those of other U.S. airlines on the island “shows the interest and feasibility of these companies’ operations” in the Caribbean country.

According to Ferradaz, they also have an “evident and positive economic impact” on the U.S., where they generate jobs and a “stable and safe” market despite the restrictions imposed on Cuba by Washington’s economic blockade measures.

Ferradaz reaffirmed Cuba’s intention to “continue developing respectful and cooperation ties in the framework of relations between both peoples and governments.”

On August 31, 2016, JetBlue carried out its first regular flight connecting Cuba and the United States since 1963. In its first year of regular operations JetBlue has transported more than 390,000 passengers between the U.S. and Cuba, operating approximately 2,000 flights between both nations.

It currently operates daily flights from the airports of John F. Kennedy (JFK), in New York, and those of Fort Lauderdale-Hollywood and Orlando, in Florida, to the Cuban cities of Havana, Santa Clara, Camagüey and Holguín.

The JetBlue offices are opening despite the fact that the formal announcement of the new regulations by the Office of Foreign Assets Control, as part of the Cuba policy changes announced by President Donald Trump, is being awaited.

The measures, which have still not come into force, preview some restrictions in the categories authorized for Americans to travel to Cuba, like individual people-to-people trips and educational group trips.

In an article published in the specialized site Aviationpros, Grant analyzed the causes for the reduction in the number of flights experienced in recent months, after the peak reached in January 2017.

For Grant, the reason for the decrease of “promising routes” is a logical adjustment of the market, a consequence of the possible assessments and tests carried out by the airlines after half a century without regular flights between both countries.

When the Trump administration’s changes are being awaited, for the analyst whose works have appeared in important media like The New York Times, CNN, USA Today and Financial Times, closing the Cuban market to the U.S. airlines seems like a contradiction

“U.S. airlines have invested considerably in both capacity and marketing to advertise their services. Would the government want to risk upsetting the market with a complete policy overhaul? Should travel policies to Cuba be reversed, airlines could stand to lose millions of dollars, and the direct and indirect impacts felt would be widespread,” he pointed out.

This year more Americans have traveled to Cuba than those who did so in 2016. In May the figure rose to more than 284,000, which in technical terms equaled the number of visits registered last year.

In recent years Cuba has experienced a boom in tourism, establishing a record of four million foreign visitors at the close of 2016. The resumption of relations between Cuba and the United States has been of key importance for this growth with the renewal of the commercial flights between both countries, suspended for almost five decades.

Irma hits Caribbean with all its force