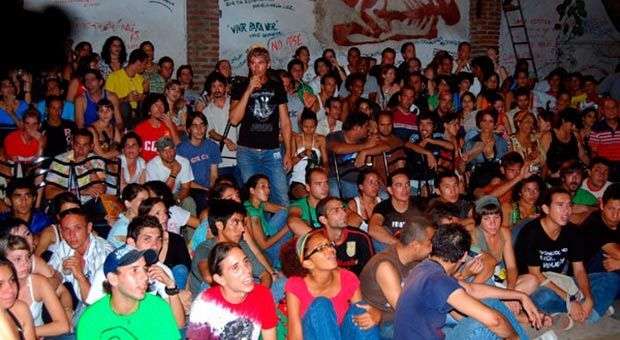 The eighteenth edition of Longina, the national troubadours meeting, came to an end. From January 9 to 12, Santa Clara city became the capital of the singer-songwriters in Cuba.

In a few days the ether was filled with sounds of strings and Pedro O’Reilly, Amaury González, Carlos Abreu, and Yuri Giralt, Cañasanta group members, sang live in the provincial radio station combining their voices and guitars.

The concert by Luis Alberto Barbería, a member of Habana Abierta, and the presentation of Frank Delgado were among the most attractive performances of these days, judging by the amount of public. Both times the spaces were small to the number of people who attended.

Barbería was surprised by how most of those present knew and hummed his songs. Meanwhile, the organizers had to agree to open the doors of La Caridad Theatre and allow corridors to be occupied by those who preferred to sit on the floor due to the lack of capacity to enjoy Frank Delgado’s songs.

Troubadours from different locations attended this event such as Vicente Feliu, Fernando Cabreja, and Fidel Diaz Castro, the groups Enfusion, Círculo de Tiza, and Argentine duo Fulanas. They all were welcomed by the hosts who suffer from a strange trova illness diagnosed as Trovuntivitis and which takes place in Santa Clara’s Mejunje cultural center for over 15 years.

The event, titled as Manuel Corona’s emblematic song-opens each year with the pilgrimage to the cemetery of Caibarién municipality, where the remains of the troubadour and his muse Longina rest.

The first disappointment suffered by the participants occurred just before Manuel Corona’s tomb when realizing its poor condition and that of Longina O’Farrill does not even have an inscription that identifies it.

Another bitter moments happened on Saturday 11, when the lecture “Villa Clara, trova and tradition”, developed by Fidel Diaz Castro, Alexis Castañeda Pérez de Alejo, and Isabel Diaz de la Torre, was only attended by seven people. The three of them agreed that the absences were due to the following reasons: the troubadours stayed up very late the night before, the theoretical lecture tradition had been lost in previous editions of the event, and provincial media gave little coverage to this space.

With its lights and shadows, Longina came to an end. The names of those who attended it, their hometowns, expectations and sensations of these days are already written in the past, but the echoes of so many guitars strum in just four days still remain in the city of Santa Clara.