The Cuban actor and playwright recently debuted with his first role in an English-language film as co-star of the film “The Mick and the Trick.” 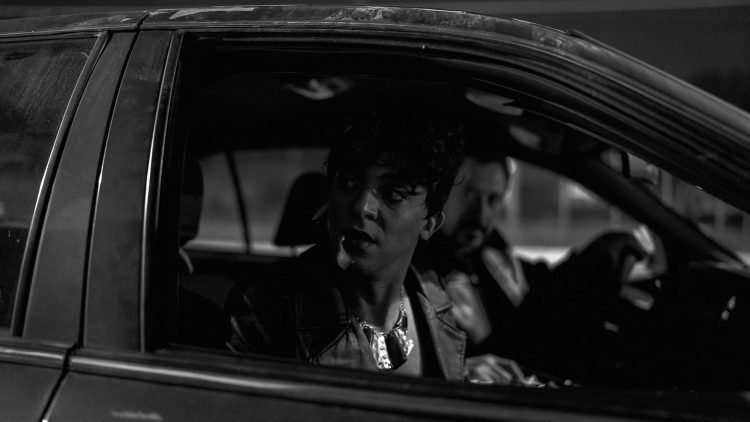 Cuban actor Jazz Vilá in the filming of the movie “The Mick and the Trick.” Photo: Courtesy Mateo Toro by Retorocle Studios.

An Irish hit man tries to leave behind his past as a hired thug for the IRA and at the service of a Cuban-American mobster, a task that becomes complicated for him and that he will seek to solve when he incorporates a bit of “Sugar” into his life, and we are not talking exactly of a small lump of sugar.

Broadly speaking, this is the plot of the film The Mick and the Trick, starring the veteran American actor Peter Greene and the charismatic Cuban actor  Jazz Vilá, who is making his debut in an English-language film, a new challenge in the career of the also renowned playwright.

“A kind of modern Bonnie and Clyde.” This is how Vilá has cataloged this action comedy, premiered on August 18 in New York, where once again the Cuban embodies an LGTBIQ+ character, just as he did with La China in Juan de los Muertos or Betty in Hotel Coppelia, this role the latter for which he competed in the category of Best Leading Actor at the La Silla Awards in the Dominican Republic.

In this regard, Jazz thanks ADOCINE, the Dominican Association of Film Industry Professionals, for the nomination in the eighth edition of these awards. “For me, it is a compliment because one does not work for the awards but obviously the awards and nominations are an incentive, a stimulus, which is the same as the one an actor receives when he is in the theater and is applauded,” he comments.

“In addition,” he highlights, “I want to congratulate the rest of the film’s cast, because it is one of the most important film awards in the Dominican Republic. It is an honor to be nominated for Best Leading Actor for a character that makes the LGTBIQ+ community visible in such an epic story.”

This and other previous work, either as an actor or director, influenced his current foray as Sugar in, The Mick…, directed by young filmmaker  Tom DeNucci (Vault). In this film, Jazz assumes his most universal character, according to the artist himself.

“Sugar is the least Cuban character I have played, he could be Dominican, Colombian or Puerto Rican. In the end, he is about a person who has had to learn to survive in the underworld of New York in the 1990s,” he says. “Perhaps the most Cuban thing that Sugar exudes is that will to seek solutions and survive in an increasingly hostile environment. That defines what he says and what he does, and that’s why he ends up with the least expected ally.”

How did the casting process go?

Perhaps it was a bit unusual when compared to what it normally is for a Cuban film. I was in Cuba during the lockdown and I received a call from one of the producers, from Robert Morgalo, from New York, telling me that he had seen my work and that he had a script and that he was interested in proposing a character to me.

I told him “ok,” but thinking that it was a joke. But then he sent me the script, I read it and after two hours I told him that I loved it, because the character was also very good. I didn’t even know at the time that I was going to share the lead with Peter Greene. It was very exciting. Then he told me to choose two scenes: “record them and send them in a week.” I prepared and sent one of the most dramatic scenes in history and another a little more hilarious.

They explained to me that in a week they would answer me and that it was a project that would be done for the summer (we met in April). The surprise was when they called me two hours later and told me: “the character is yours.” I didn’t even have to wait a week and I was so excited I almost didn’t believe it until we were shooting.

How complex was the work on a production entirely in English?

For me the most difficult part of working in English was not learning the scenes in English, but assuming that you are shooting with a crew in another language. For example, you have a director who does not speak any Spanish and who is giving you directions; or you have someone from Wardrobe or Sound and you must know how to explain that you don’t feel comfortable with the clothes or that something technical needs to be adjusted.

1. Cuban actor Jazz Vilá in the filming of the movie “The Mick and the Trick.” Photo: Courtesy Mateo Toro by Retorocle Studios.

2. Cuban actor Jazz Vilá in the filming of the movie “The Mick and the Trick.” Photo: Courtesy Mateo Toro by Retorocle Studios.

3. Cuban actor Jazz Vilá in the filming of the movie “The Mick and the Trick.” Photo: Courtesy Mateo Toro by Retorocle Studios.

We are not talking about a character in one or two scenes, but about a leading character, in a film shot under the health protocols that had to be followed in the midst of a pandemic. Every three days you had to take a COVID test and everything was quite fast, with quite tight shooting schedules. Sometimes it was 12 hours straight, precisely because if someone tested positive, production had to be stopped and everything was tried to be done as quickly as possible.

In addition, the film was shot in late November in the city of Reading, Pennsylvania, sometimes at dawn, with three or four degrees of temperature and not with warm clothes. In such circumstances I think that the most complex thing is not to act, but to be aware of everything that surrounds you, of the production team, and try not to miss anything so that the story reaches the heart of the viewer beyond the language.

Regarding the language, there is the recent controversy with the movie Blonde, for which Ana de Armas has received criticism for her accent in her interpretation…

I think the opinions are totally premature. Any criticism derived from a trailer has the obvious desire to get some kind of publicity advantage. Ana is an excellent actress; We have been friends for many years and I know how much dedication and effort there is behind each one of her projects. I know how much study she put into each line, so it will be a performance that will be tattooed on viewers’ retinas.

Marilyn is a timeless icon and Ana will be remembered, beyond any accent, as the Cuban who immortalized the most legendary blonde in cinema. All my support and trust are with her. I know that Blonde will be a success that will mark her career and will bring her a lot of joy.

1. Jazz Vilá with Peter Greene at the premiere of “The Mick and the Trick.” Photo: Courtesy of Pedro Navarro.

2. Jazz Vilá and part of the cast of “The Mick and the Trick” during the premiere of the film. Photo: Courtesy of Pedro Navarro.

3. Jazz Vilá with Peter Greene, protagonists of the film

How could this stigma against Latino actors in U.S. cinema be eliminated?

I think that breaking into the American industry takes a lot of preparation. You cannot reach the top if you are not prepared to climb the mountain first. In this sense, language is essential to act and to communicate. Let’s not forget that before you stand in front of a camera you have to earn the scene.

I don’t think there is a stigma. In the end, there are Latino actors playing characters for many years in the United States, from Rita Moreno, Eugenio Derbez, Diego Luna. I believe that American stories will give more and more space to Latino characters, but above all in more inclusive, more universal stories.