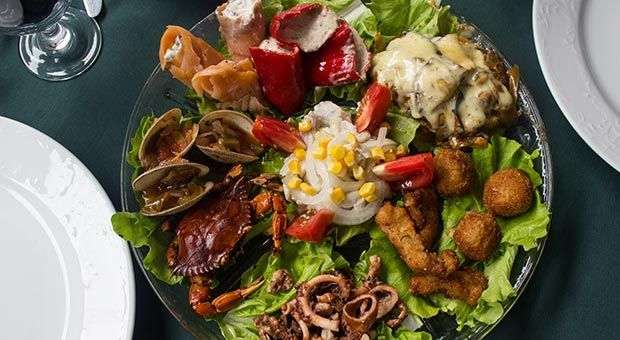 A 1950s California-style house can become something more than a home. Led by an entrepreneurial family and the needed secret touch of sensitivity a home can be more than just walls, hallways and rooms and can turn into La Casa, one of the most renowned restaurants in Havana.

In those nineties, where the creativity of the Cuban was tested, the Robainas took to conceive their Nuevo Vedado home as a space for the enjoyment of the meal. “It’s authentic Cuban food prepared from national recipes, many of them family heritage- combined with the richness of Spanish tapas, Italian pasta, Japanese sushi, French pastries and other dishes of international cuisine.” All that you can read on sites that speak of the place. And it is absolutely true. The house is one of those classic tastes, halfway between restaurant and home kitchen, where visitors not only savor elaborate dishes but receive the attentive service that is only obtained while in family.

In the afternoon when we looked through its door, in the little waiting parlor promotional flyers for the 18 years of the restaurant rested in the center of table along menu cards in Russian and English, and a sheet of papers with reservations where you can read:

The enumeration went on, constituting an extensive list that makes us suspect that they have well deserved the fame by TripAdvisor website which places it among the top 5 restaurants in Havana.

At home there is a nice mess that the elements of home with the details of a traditional restaurant mix.

So live the water wall and the stage of sushi, the parrot and the wall of the lobby gallery, photos of celebrities who have visited the place (in a hurried glance we recognize Maradona, Clive Owen, Martin Torrijos, Pancho Céspedes, Jimmy Page, Jude Law) with a collection of banknotes of various nationalities. And so are the houses, in which one settles trophies, ornaments and memories without much order.

Given the avalanche of new business, with ingenious and resourceful entrepreneurs, La Casa bets on new spaces but still anchored in their traditional strength, the essence of a family business. Thus they incorporated an attractive tapas bar in its upper floor, a grill, and its popular sushi Thursdays and modernized reserved lounge.

In recognition of its delicious activity for eighteen years La Casa, representing the non-state sector, was invited to participate in May this year at the V Varadero International Gourmet Festival, where it even won the award for booth design. Knowing that to stay between customer preference they must broaden their horizons and learn what is cooking in the international business, La Casa participated in MISTURA 2013, the largest international food fair in Latin America, and their International Food Meeting held in Lima, Peru, last September.

But despite the changes in the room there is the eternal family table, in which the grandmother María Sánchez, Manuel Robaina brothers Alexander and Karina and the inevitable kindred cousins, grandchildren and nephews converge continuously, like in every home that respects itself. It is a reminder that despite the excellent and varied menu, uniforms and carefully laid tables, this is no more, and above all- no less, than a house.

Defending the Caveman by Alexis Valdés keeps playing in Miami

Rock made in Cuba: "Breaking the diphthong”