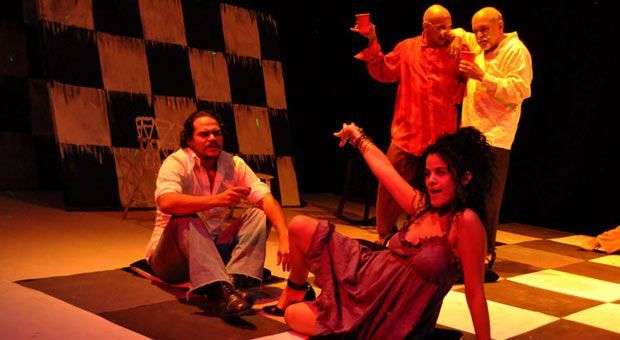 Mephisto Theatre has not been a troupe of great successes in the Cuban scene, maybe because Tony Diaz fails to resign himself to the decline of the Cuban musical theater as a genre, and strives for taking to the stage major hits such as Chicago and Cabaret with very few resources. The result is sometimes disastrous and others, inconsequential.

But occasionally , Mephisto discards musical and takes into scene other works. ¨Muerte en el bosque¨ ( Death in the forest) is the most recent, the version that Tony Diaz wrote on the novel ¨Mascras¨ (Masks), by Leonardo Padura Fuentes, which was premiered in 1999 along with Rita Montaner Company.

Mephisto struck three times to see the death of a young man dressed in Electra Garrigo in Havana Forest. On a chessboard, that misses the point after the first scenes, the research is developed and conducted by Mario Conde and his assistant Manolo under Alberto Marques´ information, a parameterized homosexual playwright in the ’70s, who lived with the already deceased Alexis Arayan.

Thereafter, the researcher will also unwittingly delve into the dark past of the Gray Quinquennium of the Cuban art movement and the grotesque world of transvestites in Havana , and this is going to be, between lines if you will, the real purpose of the work.

Alejandro Milian gives life to Mario Conde with a singular mastery. With a skill that someone may possess at twenty-six, after having embodied queens, journalists, women dressed as men or praised barbers, and leading a group of children without theatrical training in two or three musicals. As the work requires it, Alejandro reveals the sensitivity of a cop -writer, former Catholic and conventionally skeptical, who I think from today to be arguably the most fabled character of the plot.

The mystery drags with it several suspects: the lover, the solicitous intellectual the father … And the outcome, which rules in favor-or against- the latter, comes to justify the theme of play. Because Faustino Arayan was tired of being singled out by other officials of the diplomatic body because of his son’s homosexuality. That and Alexis´ threats of telling the frauds of the illustrious officer “forced” him to strangle him with a red silk piece.

The mother does not appear until late in the play. Frankly, I wonder why, after attending the master acting class offered by Leidis Diaz in ¨Matilde¨ . “You do not know the pain a mother feels when knowing her son is gay,” she says, and her hands are trembling and her eyes exude a deep and imperturbable pain, bathed in tears that begin appearing and never fall, which start stagnating between the eyelids while poisoning her soul with blame. Sometimes she even wanted him to die, “due to the shame” she says, and ends the monologue apologizing loudly.

Other characters were more or less at the height, the aforementioned Mario Conde (Alejandro Milian) and Alberto Marques (Jorge Luis de Cabo) . I am obviously referring to one of the casts. I doubt that Carlos Pérez Peña, Heidy Villegas or Rayssel Cruz to disappoint in the play .

Generally, Tony Diaz manages to synthesize Padura’s novel into an entertaining and unreflective work, but also, disordered at times and with several gratuities already common in his repertoire. Too many musical themes, which were also little related to the plot-even if sung by a transvestite-, delayed or overshadow the development of the play. It seems that Tony tried, by all means, playing the music, but this time he decided to bet on mystery. These alternatives, in my opinion, have yielded him better results.