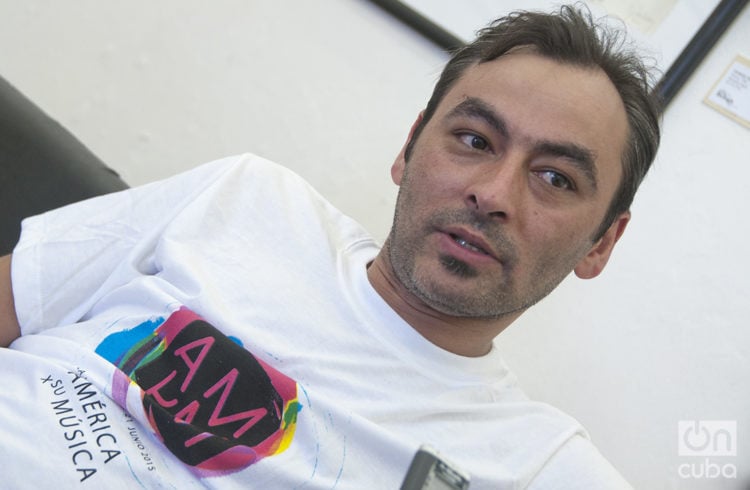 Although many in Cuba think that local music is well known abroad, the truth is that except for Buena Vista Social Club, Los Van Van band, and one or two singers/songwriters like Silvio Rodriguez or Pablo Milanes, Cuban musicians are quite unknown in many Latin American countries, and rarely perform in festivals in the region.

A gathering held in Havana for the first time in recent days under the title “AM-PM: Latin America in Defense of Its Music” is seeking to revert that situation.

The event was organized in the new context of the likely re-establishment of relations between the United States and Cuba, to start exploring the possibilities to introduce local productions to the powerful American music scene and circuit of festivals.

Gabriel Turielle, director of Contrapedal Records and President of the Music Management Forum for Latin America (MMF LATAM), said that music managers and agents on the island will soon experience an avalanche of work.

Turielle, who was born in Uruguay, said that he had witnessed how the interest in Cuban music had increased in some markets following the announcement that the U.S. and Cuba would be negotiating a rapprochement.

“At MMF LATAM we are very interested in strengthening ties between Latin American countries, as a previous step in our efforts to take our music to the rest of the world,” said Turielle, “That’s of utmost importance to us, and we expect to come up with a concrete plan to start promoting Cuban music in the region.”

OnCuba: How did MMF LATAM originate?

Gabriel Turielle: It’s a new organization that was officially founded in Colombia in October 2014. It is part of the Music Managers Forum, a much larger international organization with branches in the United States, Europe, Oceania, and Africa. There wasn’t a Latin American representation until recently, and that’s where we come in.

MMF is a network of professionals that includes workers and business people from the music industry, people interested in projects that are economically sustainable.

Our organization brings together over 50 members from 15 countries, and we think that, before opening up to the world we need to grow stronger as a group first, and come to be able to negotiate our conditions in a convincing manner, and to the benefit of our artists.

How do you operate?


GT: We generally take part in festivals and fairs. We are organized in work committees that take care of distribution, communication and exploration, with a view to developing projects.

We already took part in our first U.S. event, the Saint Lake Festival, with a program of Latin music that was a success. The plan is to continue expanding and then include much more kinds of music.

We also provide training for managers. This event in Havana is, in part, aimed at raising the level and quality of people’s work.

Some people think that live concerts are more relevant than records in today’s world, where online commerce has given the coup de grace to disc sales. Do you think that gatherings like this and your organization are the answer to finding new ways to connect music and the public?

GT: Finding new spaces for artists and helping them get more exposure is essential. We are also creating new festivals, using public and private funds, and promoting other kinds of actions to take music to people. Music groups used to play live to get people to buy their records. Now concerts are the end in themselves -although there are other ways to make a living in the music business, like composing music for soundtracks or ads.

In Mexico, for instance, bands sell T-shirts and other products with the band’s name to make money. That caught my attention, as a foreigner living in that country, because it is not common in other places. That comes from the close relation that bands establish with the public in Mexico. We have to learn from those experiences.

Do you have plans to organize a music festival in Cuba, as a way to promote this opening up to the international market?

GT: More than a festival, what we have in mind right now is creating a tour circuit to take hundreds of Cuban musicians to perform in multiple countries in Latin America. We would take care of organizing and promoting the tours. We are already connected to Uruguay, Brazil, Chile, Panama and Mexico, through the representatives from those countries that attended this gathering. Those countries are already available then, and all we have to do is to reach an agreement. I’m confident that we can do it. Honestly, this initiative fills me with joy. I think this is wonderful and I think that those who really love music and culture should support these efforts and contribute in any way they can.

The Cuban Lottery: Luck and Other People’s Money

Old School is Cool: Touring Havana in a Convertible