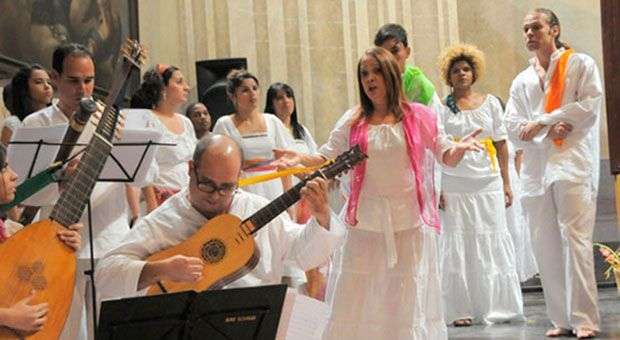 Teresa Paz, director of the Ars Longa early music ensemble, talks to OnCuba regarding the two decades of the group’s existence.

20 years ago, the first Cuban group specializing in ancient scores, which would become the main sponsor of the Early Music Movement, emerged in our country: the Ars Longa group.

The group is named after the Greek physician Hippocrates thought, “Ars longa vita brevis” (Art is long lasting, life is short). “We were inspired by that phrase to name the group, as we perform the art that has endured since the Middle Ages,” says Teresa Paz, director of the group.

With the desire to rescue the entire musical heritage was forgotten, the group begins to investigate repertoires that dated between the Middle Ages and the Baroque, to improve it and spread it.

A year after the foundation in 1995, the Office of the Historian of Havana, welcomed the assembly to form part of their cultural program.

Teresa Paz illustrates the beginnings: “It started with a duet between my husband and I Aland López; but he was noticing the lack of more members and instruments and from there came to what is now “.

From that hope, germinated a mixture of sounds with lutes, oboes, violas, flutes, guitars, violins, harps, reeds and others, in an act of complicity with the time we move into the past while questioning and showing the present.

The interpretations of carols, pastorals and cantatas from the colonial period, are an example of the ancient manifestations of American art music carried by the group today.

Maybe it’s due to the constant effort and dedication to this music, that Ars Longa has gotten so much prestige on the island and internationally. Conquest achieved largely thanks to the work of the soprano who runs it, who has agreed to talk with OnCuba.

Currently there are other groups working in the same direction as Ars Longa, but you had the scoop …

We are pioneers in the movement of interpretation of early music in Cuba, because it did not existed a group specializing in this repertoire before; but we do not deny history as Isaac Nicola, who ordered the construction of a guitar, for example; also was the maestro Jesus Ortega, the Exaudi group, among others.

From the beginning, we thought not only about us, but we try to involve others, to create a projection to other groups, share with Cuban musicians; therefore arises the Music Festival Esteban Salas.

The group´s drive out has attracted interest from musicians these repertoires for ways to interpret; and there are other groups, there is Exulten Ars Nova and Santa Clara, just to mention a few.

We thought it was appropriate to carry out workshops, because in our country old instruments are not studied in the academy. These shortcomings need to be covered, at least, with workshops or conferences from musicians who come to Europe and America.

What interests us now is to try to implement a teaching of the ancient instruments and performance techniques in our art schools. We have done experiments in the Amadeo Roldán, at the National School of Music and Baroque Orchestra create it as a project that brings together all that is about the type of music that school.

If the interpretation of ancient music is not studying in Cuba, what is the training of members of the group?

Although in our country there is a school of ancient music, the preparation received by musicians at conservatories, has allowed us that with such a high level, we canmanage the old instruments. We have drawn on the Cuban school, which is lovely. We try to make approximations: if you are a violinist, play baroque violin and so.

We also provide assistance to groups outside Havana, there has been collaboration, and for example, we donate instruments and conducted workshops with its members. Thus, the consciousness that there is a movement, not just a group that develops without looking at the progress of ancient music in general.

Tell us the role as host of Ars Longa Early Music Festival Esteban Salas, who is 10 years old.

Actually, the most important thing is to project the interest we have in that musicians know our ways of execution. This year we had the distinction of having the oldest and traditional Music Symposium: Convergence, a theoretical meeting with specialists and musicologists. This is very important because it is establishing a theoretical thinking about everything that relates to interpretation.

Keep in mind that the musicians of this kind of repertoire are as researchers; also have much dedication to this. Precisely, the early music movement has called him in various ways, including “historically informed performance”, which shows that all you can study a work will bring much more to the listener to what really was the original idea of it. That what is about without putting aside our artistic purposes, to achieve all the veracity so that people understands the played by music. That has been our research in these 20 years

Tell us about the community work and Cantus Firmus children choir.

Since 2000, we conducted this cultural work in the historic center, which is based on the purpose of the Office of the Historian of Havana to involve citizens from downtown inthe heritage restoration. The people of the village live in buildings that are recovered and then they should have an awareness of what the heritage rescue. That’s why we work with the children here, we teach what is an old score, how to play an instrument of this type, etc. It is a very beautiful work, which occupies a large weight in the group’s work.

Right now, what is the biggest goal Ars Longa have proposed?

We just finished the festival, which was a big goal, with 34 concerts, a beautiful exhibition of exclusive Cuban plastic. The purpose is to continue working, to conform the specialized program of Paula Church, to record … We have proposed a very interesting records, in fact two created between last year and this are about to come out. In addition, we are interested in rescuing the music researchers are transcribing, and it is important to disclose, particularly in Europe, because people do not know that there are such valuable assets in America.

After 20 years, what they have accomplished and what remains to be done?

First, we achieved the difficult task of historically informed performance in Cuba, when it really is a treat for the lack of conditions. Having a group with all the requirements, regardless of how expensive it is, is an achievement that we appreciate, as we find a space to do our work: that is the greatest joy. In addition, the fact that this work has it had an impact not only in Cuba, but internationally, is wonderful. We have arrived at important venues such as the Konzerthaus in Vienna, also the most recognized festivals in France. It is a reward that people can know that there is a heritage of this part of the world.

What remains is to secure a little more education and preparation of the instruments on the island were made strides, but we still have a long way to go. This is the beginning, do not think we can cover everything, but the effort to light the torch and carry on from generation to generation, we may be able in the future to speak of a movement of early music strengthened: this is our dream.

Moraleja: to celebrate with Mom