City authorities named a street in honor of the legendary Cuban singer. 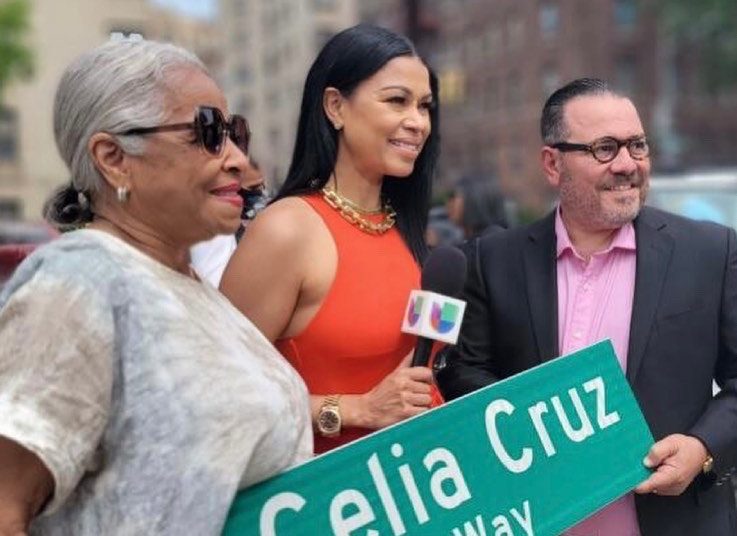 New York took to the streets to say goodbye to her when she died, at the age of 76. The photos from that day are memorable. Thousands of people on street corners paid tribute to Celia Cruz and escorted the procession to the funeral home. The city still remembers how dozens of admirers of “The Queen” sang and danced to her songs before her remains were buried in Woodlawn Cemetery, in the Bronx, New York County, during a private ceremony.

Today in the same neighborhood where “The Queen” rests, a street was named after her. To say that with this symbolic tribute Celia returns to one of the cities that saw how she devoted herself to it would be to not honor her memory, because she certainly never left that city. Her work and her legacy are part of New York’s most deeply rooted Latino heritage, where you can regularly listen to her music and bump into any passerby who, after realizing that one is Cuban, immediately mentions her name.

The ceremony had the attributes that sustain the rapturous force of her music. The afternoon was a party that rested on the joy and jubilation of the attendees, among whom were admirers, friends and people very close to her career. Omer Pardillo Cid, Celia’s executor, has been one of the main architects that today has led to a street in the Bronx to be recognized by the name of Celia Cruz.

“Celia’s memory has never left this city because her music sounds daily in any corner of the Iron Babel; what she sowed here with her music was so much that it is eternal. There was no Celia Cruz without her New York and no New York without Celia. Every time she landed at JFK airport from her long tours of the world she would say: ‘Thank you GOD for bringing us to Casa NY.’”

Omer explains how the process was that culminated in this new tribute to “The Queen”: “A petition is made and is explained to a commission that directs the department of parks and streets and then it goes to the commission and they approve it. Of course, it has to be someone who is relevant to the city and has done charitable things in favor of the people, which Celia always did.”

Celia’s work is based on the roots of Cuban music but has been taken as a reference by Latin culture. It is not surprising then that it is one of the great symbols for artists in the region and one of the most important references in the history of popular music.

Omer, who was by Celia’s side for decades, explains that in this tribute people also came out to defend the joy that her music radiates. “Those attending the event welcomed this moment with great joy. The eternal joy that Celia always radiated to every Latino who feels that she is part of their triumphs in this city could be felt.”

His words are widely supported by that diligent reality that has seen the permanence of the Cuban legacy, not only in New York, but in other American cities. About three years ago I remember getting on a bus near the United Nations headquarters and from there you could savor her music. I exchanged a few words with the people who listened to the melody and they confirmed that they were born in New York, that they did not understand anything of what Celia sang, but that her voice and her barrage of rhythms entered their body with a contagious force. On the walls of the neighborhoods with a Latino majority, you could also see, next to the graffiti, images with the singer’s face and with her war phrase: “Azúcarrr.”

“One of the traits that most always marked Celia is that in this city there are all nationalities and everyone lives in harmony and mutual respect for other cultures. NY is very cosmopolitan and she loved that,” says Omer to OnCuba, while he waits for a flight to Los Angeles.

Celia Cruz left Cuba for Mexico in 1960 with La Sonora Matancera. She later settled in the United States and was never able to return to the island, where her songs, despite censorship, have historically been heard at parties or family celebrations. Her life was full of milestones that are directly related to the highest summits of Latin and universal music. The concert she gave in Zaire with the Fania All Stars orchestra before the fight between boxers Muhammad Ali and George Foreman, in 1974, was one of those moments in which Celia not only put the name of Cuba in the intimate geometry of the world; but also that of Latin culture.

Omer remembers that New York welcomed Celia forever in November 1960. “From that moment on she made NY her home and her music was part of the sound of this city, so today she is eternally here with a street that bears her name.”