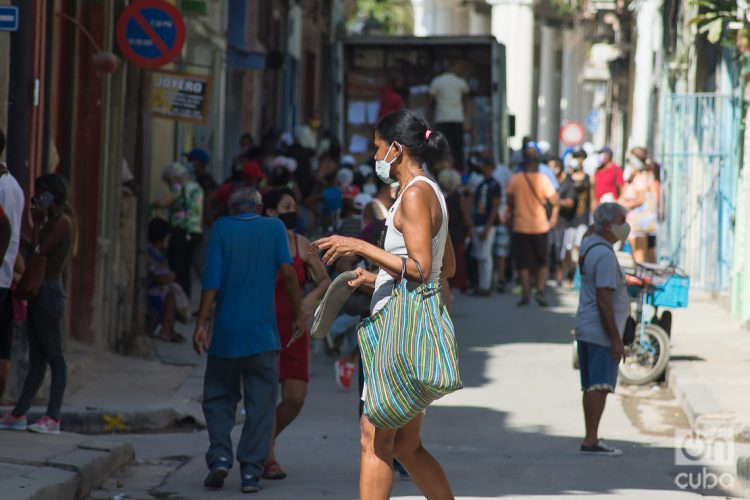 People on a street in Havana, during the current outbreak of COVID-19. Photo: Otmaro Rodríguez.

The SARS-CoV-2 virus has already produced 150,103 infections in Cuba with the 1,185 cases on Sunday reported today by the Ministry of Public Health (MINSAP), which also reported 13 deaths and 173 patients in ICUs.

The figure for the ICUs, where 58 people were in critical condition and 115 were in serious condition, is equal to the highest record just 24 hours before. A total of 26,036 people were under some type of hospitalization yesterday due to the pandemic.

The deceased are five women and eight men between the ages of 39 and 89, residing in municipalities of Havana, Matanzas, Mayabeque, Artemisa, Ciego de Ávila and Santiago de Cuba.

Regarding infections, the majority occurred due to autochthonous transmission (1,051), 1,107 were contacts of confirmed cases and 34 acquired the virus abroad, a record mostly affected by Cuban travelers from Russia (32), Spain (one) and Venezuela (one).

10 foreigners also tested positive, seven of them “imported cases.” On the day, according to the MINSAP, 20,992 PCR samples were processed.

Regarding territories, despite experiencing a discreet decline, Havana accounted for the highest number of cases: 398. It is the first time since April 1 that the capital has reported less than 400 daily cases and, according to Dr. Francisco Durán, this is good news although “the chickens shouldn’t be counted before they hatch.”

Nine municipalities in the capital, along with two from Mayabeque and one from Pinar del Río, concentrated 31.7% of the transmission in the last 15 days. Quivicán continues to have the highest rates, followed by Sandino, which once again increased its cases at this point.

The incidence rate in Cuba in this period dropped slightly to 147.4 per 100,000 inhabitants.

The other territories that reported the most cases on this day were: Santiago de Cuba (165) and Pinar del Río (134). Only the special municipality of Isla de la Juventud did not report infections.

Yesterday 1,156 discharges were reported, according to the MINSAP, which also reported the existence of 5,917 confirmed active cases of the disease.

Of those diagnosed, 46.4% were asymptomatic.