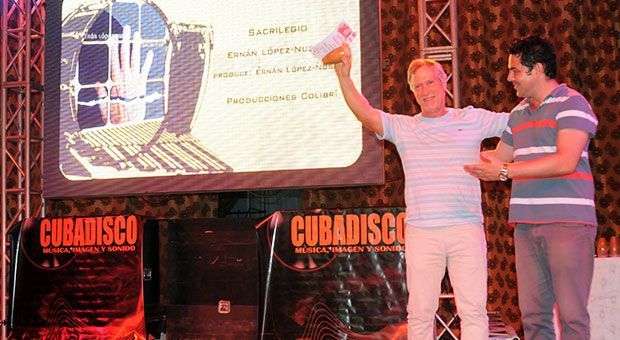 Cubadisco 2014 is at the door. The phonogram event, the largest ever on the island gathers the productions of the music industry for a coveted award that this year has 46 categories and 132 nominated CDs, according to data provided to OnCuba by the organizing committee.

This Tuesday the first winners were already announced. Six phonograms have been awarded the Special Prize for their exceptionality. The news was released at the legendary Tropicana Cabaret in Havana.

By delving into the intricacies of competition, Gonzalez Bello, said: “This year has really been a great surprise, because we did not expect such a huge quality productions presented and this, of course, made us make exceptions for certain categories.

“We know what is stipulated is five nominations per category and this time we can find up to six, especially in Jazz, Cuban Jazz and Traditional Popular Music. This speaks volumes about the amount of disks presented since we received over 200 phonograms in the admission process, of which 132 titles have been nominated in 46 categories.

“We also have six Special Awards which are noted for their exceptionality, either by the novelty of his conceptual proposal or because they testimonials also of certain figures of Cuban music, or the rescue of indigenous values of our sound.

“From this point of view, we’ve received 132 titles with 201 nominations. Actually, they were intense days of work. We’ve opened a category that is the Productions of musical research, because we have received a lot of compacts that become the conclusion of a whole musicological process, aimed at music research and where there is a diversity of topics addressed, including cathedral, folk, peasant music and that related to African presence in Latin America. “

A peculiarity was perceived in the competition in previous editions: the presence of a considerable number of phonograms made by independent producers. How has that behave this time? Have national labels erased that difference?

This year we have to acknowledge and commend the work of Colibri Productions, because it has been the home to largest number of volumes presented and, consequently, the most nominations with 96. It is followed by independent productions linked to foreign labels, which added 38; then Bis Music, 34; and Egrem with 24.

“This year has been a lower presence of independent productions and CDs from the Cuban Diaspora. Either way, it is always very rich and fruitful exchange and this openness that we decided to do since 2009, which is given the opportunity to compete to products that are not welcomed by national record companies. “

What can you tell us about the process of selection of nominees for the 2014 International CUBADISCO Award?

We have not disclosed it; although we have held sessions and have decided that presented 40 productions, 18 have been nominated, which belong to dissimilar countries. We have a pretty notorious representation from Latin America, among which there are countries like Bolivia, Peru, Chile, Venezuela and a huge collection of Ecuador. United States and Spain also have a good amount of discs.

We understand that this time the awards will be delivered in a different way.

We will deliver them at a ceremony on May 14 in the 1930 Hall of the Hotel Nacional. Let’s say the reason is financial and that shows a departure from the past, when we made galas in a theater with all the grandeur that this award deserves.

Could you clarify us the strongest categories?

In three categories it was impossible to reduce to five nominations as stipulated by the quality of the proposals. These are Jazz, Cuban Jazz and Traditional Popular Music. The categories of songs, Contemporary Song and Teaching are also closely contested.

Neris González Bello said that right now the jury is already in deliberation phase, a process she described as strong as due to the quality of the proposals.

“We are today at the stage of granting awards and has finally been very difficult to choose one by category ,” she said while announcing that exceptionally the Awards Committee has decided to award special recognition in this edition to albums of remarkable making that might well have been winners .

The hill and its cross