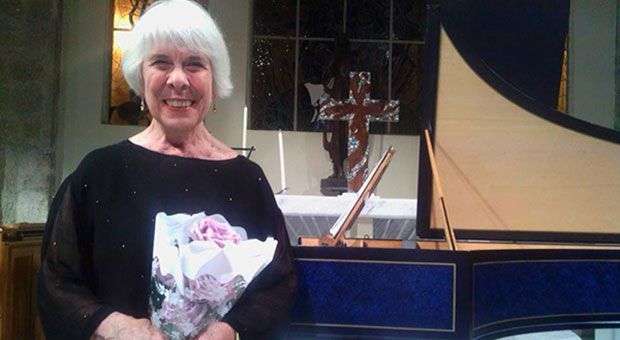 Her music takes us back to the European baroque period and at the same time it brings us back again with an exquisite performance. Her smile shows a happy woman; her hair reveals a woman of old age. And Havana is pleased to welcome back North American spinet player Kathleen McIntosh.

She, who has become a regular guest for the Esteban Salas Early Music Festival, arrived for the 10th edition of this event to offer workshops and concerts on instrumental music of the European courts from the 17th and 18th centuries, as usual.

Perhaps her presence at this event has to do with her opinion of the festival: “Through the years the festival has increasingly improved and today it stands in a high position internationally, it is winning spaces in the world… I am always surprised to see how much it has progressed.”

“Old music has developed in Latin America and particularly in Cuba. At present, there are seeds spread everywhere, there are lots of groups not just in Havana but also in Bayamo and Santa Clara. In Europe there are musicians playing in famous bands and they started here. Ars Longa is a key example of that and it is one of the best bands of this kind in the world.”

In Cuba other experiences like workshops and lectures have also called her attention. “Students are wonderful, they show a lot of interest and devotion despite any problems. Sometimes there are no instruments or they are scarce, however, they don’t ever loose their enthusiasm.”

The work of this knowledgeable artist, a fan of spinet players such as Gustav Leonhardt or Thurston Dart, has travelled all over the world. She has performed with bands in Moscow, Hanoi, Mexico and the United States.

As soloist she has participated in festivals in Spain, Japan and Peru. Besides, for a few years now she has been playing in the United States at La Joya Summerfest, Bravo! Vail Valley, and since 1996, at the Santa Fe Chamber Music Festival in Mexico. In addition, she is a member of the McFish Duet, which commissions new pieces for viola and spinet.

As part of this Festival she performed on February 27 and March 2at the Old Church of San Francisco de Paula, where she developed a workshop which is the result of her work with young Cuban musicians.

Unfortunately, her profession calls for her somewhere else. “I’m working at the Santa Fe Chamber Music Festival in Mexico, where I live; I perform mostly in this city. With McFish I’m working on contemporary music and recently Leo Brouwer wrote a song for us.”

“In June I’ll be in a festival in Lima and I will spend two weeks teaching spinet lessons at the conservatory.” But this isn’t a good bye: “I always look forward to return to Cuba”, she said.