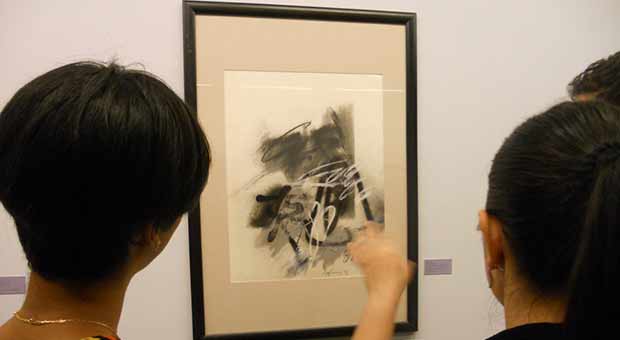 The relations among American countries are present in different spheres, but culture has been a space of exceptional confluence. In Cuba several cultural centers favor these links and one of the most important places is Casa de las Americas where different cultural figures coincide. As a result of the management of its specialists and the will to cooperate of many artists, this center owns a wide collection of visual arts representative of the Latin American countries.

Arts and culture from Chile has lead several events held at Casa de las Americas and it is very well represented in the collection Arte de NuestraAméricaHaydeeSantamaría. For that reason, Mr. Rolando Drago Rodriguez –Extraordinary and Plenipotentiary Ambassador of Chile to Cuba—requested collaboration from this institution for coordinating an exhibit on Chilean arts in Cuba, with the participation of curators Wendy Amigó, Susana Mohammad and RomyMartínez, specialists from the Department of Plastic Arts. For the exhibit they chose two cultural centers, whose collections gather renowned Chilean pieces that stand out for the quality of its authors and works, that is, the National Museum of Fine Arts and Casa de las Americas itself.

For the exhibit Chilean Arts in Cuban Collections.National Museum of Fine Arts and Casa de las Americas.16 authors were selected. The exhibition was inaugurated on January 24 and will remain in the temporary exhibit room in the 4th floor of the Universal Arts building until March 14th, 2014. Diverse Chilean plastic arts styles and trends can be appreciated there: sui generis surrealism by Roberto Matta, kinetic art by Matilde Perez and informalism by José Balmesand Guillermo Nuñez. The interest for the human being, its conflicts and its role as social beings, mostly in the work of Gracia Barros and in the photographs by Paz Errázuriz, Alejandro Hoppe and Luis Weinstein.

The broad heterogeneity of artistic manifestations is evident in the exhibit. There are paintings, drawings, embossing, photographs and ceramics. There is also a book of artist made by Guillermo Nuñez to the poem Latauro by Pablo Neruda. Sketches of the mural Cuba is the capital –made for Casa de las Americas and placed at the entrance of the institution—and the occasional pieces by Matta make up this exhibition that allows enjoying extraordinary pieces of the unique Latin American creator. A huge mattress of vivid exquisite colors and a reproduction of the back of a chair designed by the artists in collaboration with Gonzalo Córdoba –one of the most famous Cuban designers—are in display at the Museum of Fine Arts.

Chilean Art in Cuban Collections gives us the opportunity to get closer to a portion of Chilean pieces treasured in both institutions. Although there are some pieces that have not been put in display, the selection of pieces to be exhibited has allowed appreciating well-known authors and their pieces in the development of Chilean and Latin American plastic arts.