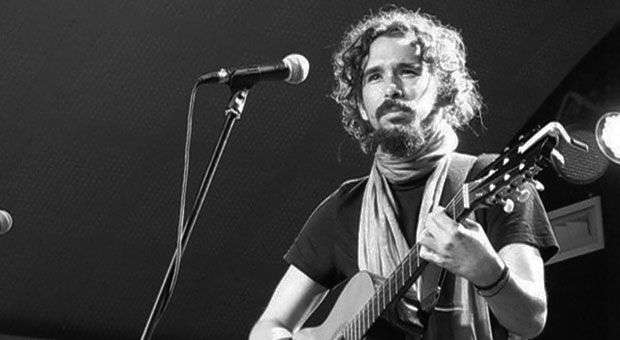 There are friends that ask for help and it is impossible to say no to them. For me that is the case of Robertiko Ramos, a very good designer and a friend from our long past times at the pre university school Vladimir I. Lennin. With Tuyuca Productions I supported him fully in the social networks about a year ago in the project Tocando Tierra by Spanish singer-songwriter Muerdo and now he asked me to join the crowdfounding of Antes que lo prohiban (Before it is banned), Kamankola’s first CD.

I already knew Kamankola, its leader. With Aceituna sin Hueso, a band that fusions flamenco and whatever, I heard him rap, even when many hip hop singers abandoned this protest genre to make incursions in reggaeton and become famous. But I had lost track of him perhaps because I was no longer doing musical journalism.

That’s how I became part of this Kamankola that would open many doors not only to Jorge Liam García, but to a means of financing unexplored for independent discography made in Cuba. As I cannot continue saying that this an amazing project, thanks to OnCuba I’ll leave to Jorgito to explain why we should support his music in the Verkami platform.

How did this kamankola begin?

I was born in Cerro, a very agitated neighborhood in Havana and with lots of problems that worsened in the 1990s. At the age of 12 I became a member of a group called Sentencia. We were three friends with a huge influence from raw American rap.

Then we came closer to the Cuban rap and we discovered groups with amazing lyrics, quite consequent with the times we were living. I felt really identified with Amenaza, ExplosiónSuprema and mostly with EPG&B, the fusion of two bands: Yunior Klan and Grandes Ligas. EPG&B was the greatest underground band in Cuba, with a particular way of saying things.

Just by hearing them I was able to get out and expressmy true feelings. It was really easy to buy the backgrounds and so we started. But we were just kids and each one of us followed his own path.

You chose music, why?

I continued writing. It had become a habit. I confess. I met a friend who had a group with drums and used to write pop music. He liked the idea of including a rapper because he had the influence of other bands like Interactivo. At the same time I was discovering music, not just rap. As I was in a creative stage, I started to write songs for this band and we recorded three tracks. But then they had to do military service and the band split up.

So, how did you make it to Aceituna sin Hueso?

By chance. I started working as props manager of the group. Then one day Miriela Moreno during a performance said: “my props manager says he can rap… so let him come to the stage”. I came up to the stage and people liked it. For more than a year I sang with them everywhere they performed.

Your first records Musasdesechables are from that time… Do you recall that period as a landmark in your career?

My first recordings were in charge of the director of D’corazontoday. My demo Musasdesechables came out and I got in the Hermanos Saiz Association, I performed in Cuerda Viva and I was nominated for the CubaDemo. Of course, that’s how it all started.

You have had an important relation with the Cuban Trova movement. I remember that in an interview to Irak from Doble Filo he told me that rap had become Trova due to his criticism to society. How is your relation with this movement?

There was a time when rappers turned to reggateon. Seing my idols all of the suddenturn to a totally different genre was killing something in me. I suffered a lot. There were a few left, but I started to lose interest in rap clubs, it was meaningless for me. I started looking for trova and came closer the trova singers. Some ignored me and some others invited me to the stage.

I had been lucky to sing with many singersfrom that movement and I found out a movement beyond the famous ones, artists that just a few peopleknow, but I deeply admire like RolyBerrio and Ariel Barreiro.

As I am a fan I started writing songs, though I confess I panic to play the guitar in front of them. And today they invite me to play my songs, not just to rap.

You talked about rap being mixed with reggaeton, a phenomenon many justify with the economic situation, what do you think of that?

There were groups that used to make really good rap and they had nothing. They started with reggaeton and got accepted by state enterprises because they bring profits and they got to recording albums. Materially speaking, they succeeded. Emotionally, I’m not so sure.

What I do know is that rap went backstage until Los Aldeanos arrived. This group suddenly shook things up though the same problem remains due to the lack of support for this genre. Right now I wanted to make rap with instruments, with guitars. I wanted to join them like this.

Can we talk about a hip hop movement in Cuba today?

In the 90’s there was a strong movement. Festivals were excellent. Today I don’t see the movement but I do see really good bands trying to make their music.

It is the idea to create what I had in my mind: my songs with the influences I have from anyone. It is my creation, with the musicians that cooperate. It doesn’t matter if it’s a rumba and then a ballad song. So that’s it: my thing.

Why choosing a physical record in spite of the depression of the recording industry? Why crowdfounding to make it come true?

It is my first album and it is a good one. One I’d like to treasure physically. Perhaps to be able to say I have it when I’m old. Among the friends that joined methere is Israel Rojas, director of Buena Fe, and Fito. I already feel it like an album.

Israel’s plan as producer was to register it with a record label, but the proposals they made us were not suitable for us because the licenses depended on the sales and we all know that there is no market in Cuba. And so this idea of crowdfounding emerged, which i didn’t know of.

If it comes out, my dream of paying the musicians, reproducing some like memory and maintaining independence will come true.

Will you use other sources of financing like collecting money?

In Havana we are going to make a concert for friends and the people in general. Those that participate please go and help us with whatever you can or you want to. And we will collect money to add to the funds. As a reward, following the lines of crowfounding, those who contribute with 10 cuc or more will get an economic copy of the disc.

What do you expect before you are banned?

I expect making the album and presenting it on March 27 at the Museum of Fine Arts, where the official launching of the Antes que lo prohiban will take place.