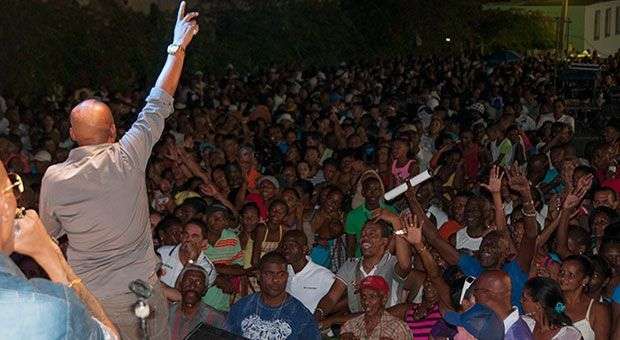 It seemed an image from the 90’s. It seemed one of those amazing scenes where timba, son…, popular music prevailed as it used to in some neighborhoods of Havana such as Marianao, Guanabacoa, La Lisa…

From the Plaza Roja in the municipality of 10 de Octubre, a classic band pleased an increasingly demanding audience in view of the scarce presence of similar bands there. Many years have gone by since the salsa “dynasty”, a boom that shook the whole country.

Manolito Simonet, the director of the Trabuco and one of the artists involved in a project by Artex to take popular music all over the country on the occasion of the 25thanniversary of this agency for commercializing art, explained OnCuba that this new initiative combines son with other musical genres and its leading characters are large popular bands.

“I cannot really say this has to do with the 90’s, though back then I made a tour through Camaguey and Ciego de Avila provinces when I was still a member of the Maravillas de Florida band. Van Van was also part of the tour.”

According to Simonet, that was a different project. “It has nothing to do with what’s going on at present. At that time each band toured the neighborhoods and now several groups have joined in order to make people dance in their neighborhoods with their favorite bands; something they haven’t been able to do for a long time.”

In a cultural activity a group of famous band directors from Artex wondered about how to take their music to the people considering that not everyone can afford attending one of their regular performances, noted Humberto Cruz, the president of Artex. Then, he added: “we came up with the idea of tours through the neighborhoods to celebrate the 25th anniversary of our institution and bring with us different gastronomic offers without any alcohol as a gift for the population”.

For Maykel Blanco this is an ideal way for “showing our work and make the audience enjoy dancing with the band’shits throughout these years”.

Maykel pointed out that these tours can contribute with boosting the people’s preference for this music. “I’m going to be honest, I think that in the 90’s there was more interest by the public. By that time I was a child, but I do remember that timba and Cuban music in general was a boom.

This initiative can encourage people, though I believe that our music is an inner trait in every Cuban. However, I feel we can do more and we have talked with several artists about it. We want, for instance, to appoint a specific day for popular music and from there we can make several celebrations, some sort of son festival. We would also like to perform at the stars’ baseball games…”

These kinds of activities are an incentive for the audience to appreciate our work, as well as working for the youngest so that they get to know what we are doing. It is really important that our music, the music that has made us travel all over the world and represents us internationally, keeps its place among Cuban”, expressed the author of the song Recoge y vete.

Artex Project is not only about son, it also combines other popular music styles. Elito Reve announced that “more popular music bands are getting involved in the project because it is important to take it everywhere”.

Among the musical directors that are part of this project he mentioned Juan Formell, Adalberto Álvarez, César “Pupy” Pedroso, Alexander Abreu and Paulito FG and said that next month they will perform in the municipality of Marianao or Cerro.

Inspired by the new generations of artists that have included son in their current repertory and that have expressed their interest in participating in the project, Elito Reve foretold the success of the project given that “popular music is really strong and that has to do with the fact that Cuba is a musical power”.

Seventeenth edition of the French Film Festival in Havana