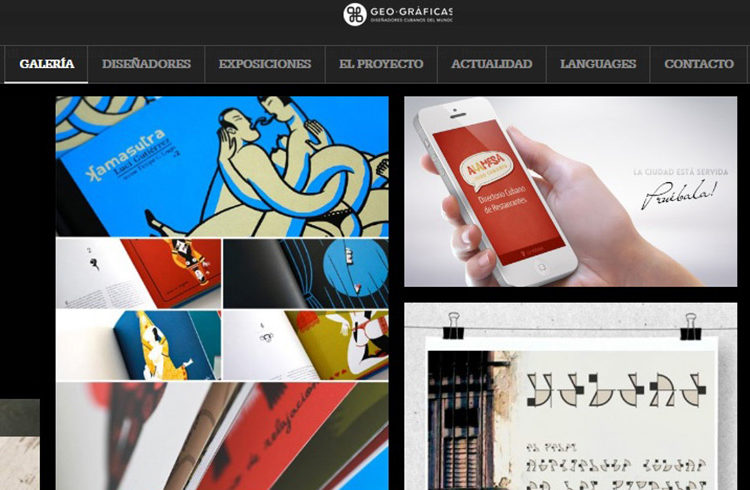 The second group exhibition Geo-Graphics 2015, scheduled for the first quarter of next year, is already announced with the slogan “Cuban designers have no limits.” Its aim is to bring together professionals living in Cuba and abroad with proposals for the private sector of the national market.

According to the organizers, this exhibition is the first initiative of displaying design work specifically destined to the private sector, and will lead to obtain valuable insights, for example, of the types of designs and prevailing aesthetic trends.

The exhibition will be attended by designers from around the world with typographic posters inspired in Havana as part of the international project Showusyourtype, with which Geo-graphic collaborates.

The sisters Annick and Yannick Woungly-Massaga created the Geo -Graphics project to promote the work of Cuban designers around the world and build bridges between those living in and outside Cuba.

“Geo- Graphics seeks to disseminate and enhance the good Cuban design,” the sisters of French father and Cuban mother stressed.

In March 2014, these graduates of the Higher Institute of Industrial Design (ISDI by its Spanish acronym) organized a first exhibition in Havana that they hope to repeat every year.

“Showing the successful insertion of Cuban designers in different cultural, economic and social spheres was the aim of the first group exhibition last March,” Annick, currently working at Messmer Seiler Design AG, an agency of product design in Switzerland, stated.

According to the sisters, the event provides an overview of the current state of Cuban design and promotes communication between all Cuba designers.

The event allowed those living abroad to show their work to the Cuban public and the success of the joint sample encouraged the organizers to multiply and extend their actions. Consequently, a few months later they launched the website www.geo-graficas.com which they aspire to consolidate as directory of designers.

“The platform allows gaining visibility and making contacts,” Anick , responsible for project communication, said. Within the web, every designer can have his own page, with a description of his career and a link to the personal portfolio.

According to the creators, the gallery of the site will provide an overview of the best of contemporary Cuban design and in the general web users can also find information about the project, exhibitions, contests and other events.

After the birth of the web, the organizers issued a call to the first poster contest, in order to select the image of the exhibition Geo- Graphics 2015 .

The remarkable designer Pepe Menendez, renowned specialist in Cuban posters and Régis Léger, aka Dugudus, French designer author of the book Graphic Cuba, were part of the jury. Marla Cruz was the winner of this contest.

“We believe that amid the increasing development experienced by the private sector in Cuba there is a real need to show the public the possibilities that design offers as a success factor in the performance of any commercial, cultural or social activity,” the organizers stated in one of their releases this year.

“While it is true that we are the initiators, we believe it would be more accurate that Geo- graphics to be seen as the project promoted by a team including design professionals (Yorlan Cabezas), communication specialists (Sandra Fernández) and students (Julian Sanrdiñas), ” Annick explained.

Your project has the mission of promoting Cuban design, why?

Our project aims to optimize the positioning of the profession, enhance the presence of design in society so that our business to be increasingly well recognized .

Actions such as exhibitions and contests are seeking to join the existing acts of recognition and promotion, and increase opportunities for designers to participate in events and projects.

Economic and technological difficulties in which our country has been plunged for decades have hampered the performance of the design profession in Cuba. The need of management design and its integration into corporate strategies are aspects that have not yet been fully assimilated.

For us the idea of promoting design in Cuba is justified by a desire to boost its beneficial role in certain actions or processes, e.g. trade relations arising with the adoption of laws on private business. We think this new situation is a good juncture to take action by increasing design culture .

From an international point of view, we thought it might be interesting to show the achievements of Cuban designers, professionals who have emerged far away from the major international design centers.

In an effort to meet the needs of visibility and competitiveness, we care about having a vision as accurate as possible of social, cultural and economic scenarios, and the needs of designers.

The web platform is currently an important edge in the project, because of the current circumstances. Following the acquisition by Adobe, American multinational, of behance.net site, the quintessential platform of designers worldwide, accessing from Cuba has been blocked.

For the next stage of Geo-graphics, as a result of our constant self-questioning, we have defined as main objective for the future, to get focused on the benefits that these alternatives will bring to Cuban designers: for us it is important that these operations to become real advantages. To do this, we will place our target in the link between the designers and their potential clients: new entrepreneurs, heads of private and state companies, promoters of social or cultural events, and every actor that when needing to some extent the services of a designer, is not yet aware of the importance of not violating this step for the success of his company. Setting this potential client-designer link is our main target now.

Was not there a magazine or space to uphold the work of Cuban creators?

According to our experiences in Cuba there is not a unique space for promotion, exhibition or publication of projects and professional skills of Cuban designers. On the Internet we do not find either any support containing an overview of the work of Cuban designers, although there are partial solutions.

Do you think Cuban design was devalued?

We cannot speak of devaluation, although it is a fact that certain actors in Cuban society are not sufficiently acquainted with the potential of design and design culture is not widespread. To be more accurate we could say that the service design is not sufficiently applied.

This lack of knowledge also results in that sometimes the design is made by people who are not specialists and lack sufficient knowledge. This is a very controversial problematic in circles linked to the profession. We see solutions that go to the market without having been properly designed, assuming various technical, economic and ergonomic problems for the consumer. In this direction funds, time and effort are wasted and bad results are obtained.

How did you get the idea of Geo -Graphics?

The idea of Geo-Graphics was apparently spontaneous, but is actually the result of a latent desire for rapprochement. To start with a group exhibition seemed a good way to promote the exchange between the actors of design in Cuba and those who migrated, and having an almost instant feedback on the feasibility of the project.

Which were the main results revealed by the first exhibition?

The main attraction of the first exhibition consisted of its diversity, as it showed works of Cuban designers from different latitudes and specialties. The most important conclusion was the provision of large numbers of migrants to participate in initiatives such as Geo-Graphics, proposing the unity between the emigrants and an approach to Cuba. There is no doubt that this is a positive trait that, in contrast to its old image of renegades, currently characterizes those living abroad.

What trend is evident in Cuban designers who left the country?

To define trends we prefer to focus on the participants of Geo -Graphics specifically, as it would not be accurate to speak on behalf of all the designers living abroad. In the case of participants in Geo -Graphics, the common denominator is the quality of the work, which demonstrates the high level of training received at ISDI. However, beyond the technical level, the inclusion of these designers in the labor market implies a high level of integration in their adopted countries, linguistically and culturally.

Within the framework of Geo-Graphics we have met lots of Cuban émigrés designers, directly or indirectly. The level of importance of the projects and the role of each designer in them is different and an accurate assessment would depend on as diverse and specific factors as the characteristics of each country of adoption and the conditions under which immigration occurred, situation that determines in most cases the right to a work permit, access to training for professional development, mastering the local language, etc.

But we would say that the work of each of them is a work of excellence, showing perseverance, efforts to gain employment and cultural integration, and intelligent use of the innate potential, leading to a perhaps slow evolution in the early stages, but with promises of exponential growth if conditions permit it.

What is the state of Cuban design in the world?

It is a difficult question to answer, as the results of the project not yet offer a global view, but the exchanges we have established in the framework of Geo-Graphics allow us to see that, in general, designers living or working outside of Cuba become ambassadors for the quality of design training in Cuba.

Many designers who have left Cuba to settle themselves permanently or work experience, in a first stage, concern and expectation of the unknown, as designing in a new context presupposes, beyond the technique and method, mastering communication, understanding social relations, ways to consume messages and products.

As the integration process advances and especially when corroborating the good results at work, this feeling translates into job satisfaction.

Do you think the instruction received in Cuba was enough?

The good quality of training design in Cuba is undeniable and is an invaluable base to practice the profession at home and abroad. ISDI graduates acquire a large arsenal of methodological and project tools, and excellent work habits.

However, material constraints limit the scope of training in some aspects: According to our experience as professionals practicing abroad, a greater openness to information (Internet and international publications access, connectivity with colleagues abroad) and work experience (contact with industry and actual production processes) would be excellent catalysts of the professional level of graduates, and are issues that currently penalize graduates starting their career abroad.

For many of these professionals the need to acquire additional studies answer, rather than a technical leveling, to the need to have a diploma that allows obtaining a job in the best conditions and adapted to the higher professional level.

Our position regarding the role of higher education is that the personal qualities of the student (motivation, interest in improvement, knowledge of foreign languages, etc.) play a huge role in the quality of the professional future. This is also the current trend of labor market, highly competitive, where personal competencies (soft skills) outweigh the technical skills.