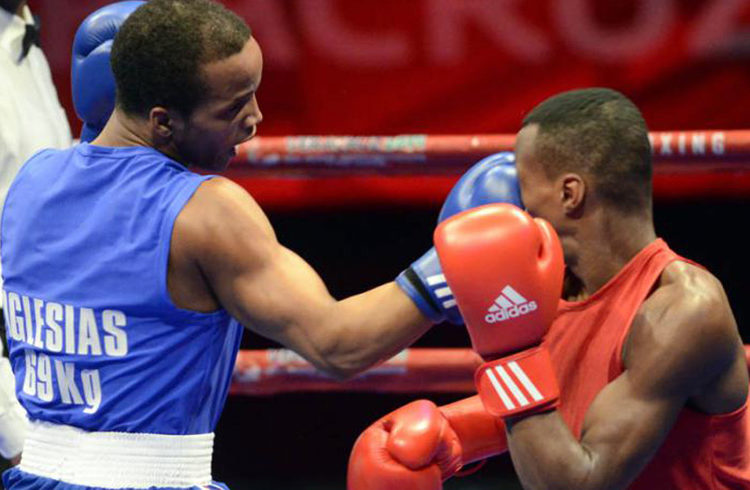 Few thought of Santiago Amador as the favorite to dominate the 49 kg division in the Central American and Caribbean Games in Veracruz. Not even his coaches ventured into predicting a triumph of the 23 years old youngster from Matanzas. Perhaps only he trusted his chances. If so, he failed.

Amador was the only Cuban boxer who returned empty-handed from Mexico. Only the vacancy left by Yosvani Veitía in that category opened the doors to this aggressive fighter to represent his land. However, he still has much to improve.

The Matanzas boxer witnessed the commendable performance of his team-mates in Aztec soil. There the Cuban boxing did its thing, in a year that can be described as the best of the last decade.

The title of the Domadores in the Fourth World Series (WSB, for its acronym in English) in their debut, crowns reached in several tournaments in Europe, excellent dividends in the World Youth Championship and the second Youth Olympics in Nanjing, China, and the awakening of various figures in the national team and the election of three of its troops from the highlights of the sport in this 2014, are elements that show the performance of the sport during the period.

Nine Cuban boxers went up and down happily in Veracruz, conscious of having participated in a competition of little cache, but that reaffirmed them as the masters of the sport in the region.

The night of November 28 was perfect. Robeisy Ramirez (56 kg), Yasnier Toledo (64), Arlen Lopez (75) and Erislandy Savon (91) had transited the qualifying rounds unbeaten and reached the big day as the favorites.

Ramirez, Olympic king in London on 52 kilos, left behind the bad times and sentenced Dominican Hector Garcia with a split decision of the judges. Now he only lacks the belt as world champion to have all the top titles given by the international governing body.

Another who took the center of the podium awards and also has foreign experience at all levels, was Toledo, twice world runner-up. His refined expertise, with his torso movements consistently making his opponents fail, were essential resources in obtaining the gold over the Puerto Rican Danielito Zorrilla, in a division that always made cumbersome by the number of contestants.

Lopez, 21, and meager foreign rubbing, proved to be prepared for higher trials as the main figure of weight. Winning was important after bolster confidence in his abilities and he did not disappoint. In uneven match from start to finish he defeated the Aztec Misael Rodriguez to become the king of the area.

Meanwhile, Savon, selected as the best boxer in the WSB, set the pace and showed to be ready for each of the efforts for the future, seeking to emulate his uncle Felix Savon, one of the greatest amateur boxers ever. The Venezuelan Alfonso Flores was his victim this time.

The second final program came a day later, on the night of November 29 and was also perfect. Yosvani Veitía (52), Lazaro Alvarez (60), Roniel Iglesias (64), Julio Cesar La Cruz (81) and Yoandi Toirac (over 91) closed in style the presentation of the Cuban boxing in the Central American and Caribbean Games.

Veitía, now in his new division, showed progression in recent seasons. In the land of Benito Juárez he had no contemplation in his confrontations and in the decisive match he unanimously thrashed Colombian Ceiber Ávila.

Julio Cesar La Cruz, Captain of the team and owner of a magnificent boxing quality, was not discouraged by the audience and defeated again Colombian Juan Carlos Carrillo. And the young Yoandi Toirac followed suit against local Edgar Ramirez.

The so-called flagship of our sports movement wrote its performance with golden letters, and for sure in just a few days you will hear names like Santiago Amador repeatedly at Finca del Wajay. There they walk in search of polishing technical details, winning punch, more precisely in the beating, increase the speed of hands and feet, and think ahead to win the title at the V World Series of Boxing.

Liuba Maria Hevia and signals of a delicious obsession