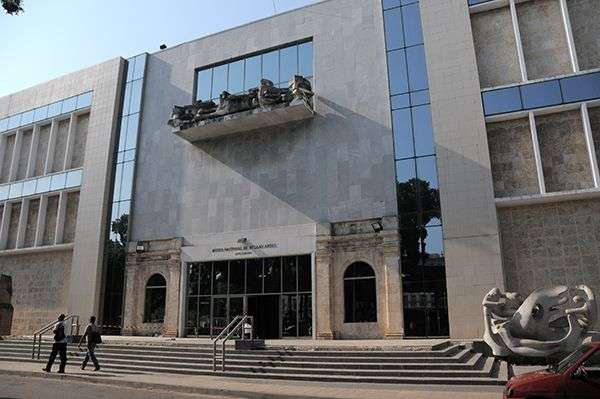 Havana’s dwellers who last Saturday, August 9, at 7:00 pm, decided to go to the National Museum of Fine Arts –whether because they knew what was going on there or just because they wanted to run away from the evening torpor of the city– were able to enjoy the musical tracks, perhaps the steps over the sea of “Viaje de ida y vuelta” (2013) (Round trip) between the islands of Tenerife and Cuba.

Young Cuban percussionist Javier Rodriguez, who settled in the Canary Islands more than 15 years ago, returned this time to share his first single album, which covers an ocean of Cuban sounds, contemporary-classic music, jazz, funk… and more.

The musician tells us his life has taken place between two islands, which is reflected in the album. The piece takes a tour though his musical life, perhaps that’s the reason why it is to a large extent unclassifiable.

In an interview with OnCuba, Javier Rodriguez explained that this album comprises “many styles” and “it is not possible to categorize it as jazz or Cuban music; I also interpret African music because I nourished from it in a trip I took to Mali; it includes music Argentinean, Croatian, Chilean friends have given to me among others…”.
The project had been on his head for several years. “I wanted to do something in solitaire and the idea came up during a visit to the Catholic University of Santiago de Chile; there I got in touch with percussion professors and one of them gave me a song after which I named the album, ‘Viaje de ida y vuelta’. It is a piece for a duet by vibraphone and marimba. That’s when I said: I have to make the album”.

Initially, the meeting at the National Museum of Fine Arts –as well as the performance next August 15 at the Campoamor Theater in the municipality of Guines, in Mayabeque province– was with a Jazz quartet but later on, the search and the findings of the multiple round trips promised to excel any preconceived idea, any typical format.

This time the team was made up of renowned Cuban instrumentalists Enrique Platt (drums), Jorge Reyes (bass) and Jorge Arango (piano), in addition to Rodriguez (vibraphone).

The catalogue of “Viaje de ida y vuelta” has been presented already in Santa Cruz in Tenerife and in Rioja, Spain; but this Saturday night the album accomplished its symbolic destination: the return.

Javier Rodriguez –who set himself the challenge of taking care of the percussion for the album– combined in it pieces by his own and by his colleague IsmailaSané (Senegal) with pieces by Polo Ortí (Spain), Jonás Super stereo (Spain), Marcelo Espíndola (Chile), Milena Perisic (Croatia) and Leandro Martín (Argentina).
However, he took some time to pay homage to sax player Paquito D’Rivera (“Memories”) –with arara afro-Cuban songs–, and great Ernesto Lecuona, whose death took place precisely in Tenerife half century ago.

“Lecuona is one of the most important Cuban musicians and I decided to make a contemporary arrangement of ‘La Comparsa’: with a tuba, a rare instrument which is barely used in popular music, and also a tres, the clave and the vibraphone, which takes the lead”.

All of them go under the unexpected dictum of the vibraphone, an instrument promoted within the world of jazz by the mastery of Lionel Hampton (1908-2002).
His interpretation resources have allowed Javier Rodriguez to move within the contexts of classic and popular music, and for that he has worked with Tenerife’s Symphonic Orchestra, as well as in Habana 10, Latineo Project, Global Perfussion, La Cumbancha, Iguapele, B.A.Q. He has performed in Germany, Austria, Hungary, Italy, Norway, Sweden, Chile, Mali, Turkey, Cuba…, and he has got to know virtuous figures like D’Rivera and marimba player Nebojsa J. Zivkovic.