"I would love for people to know more about my work and have more space to show my work," he said in the context of the 13th Havana Biennial. 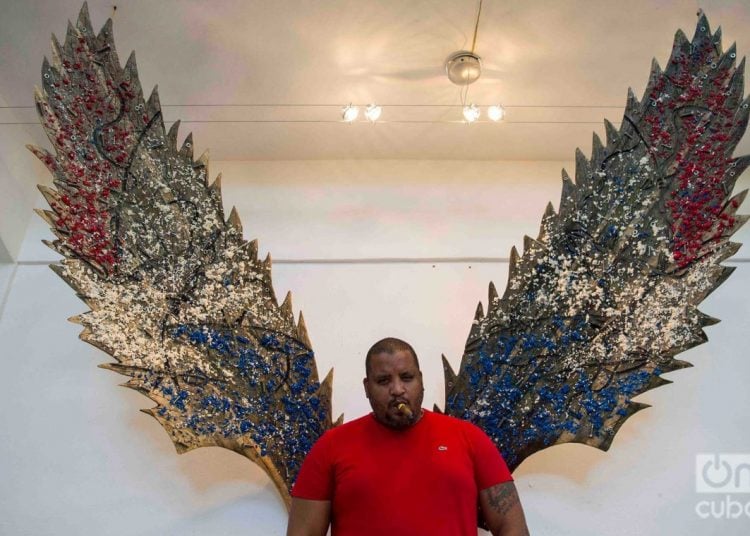 Cuban artist Michel Mirabal along with works of the personal exhibition that he is exhibiting in his gallery workshop, as part of the collateral activities of the 13th Havana Biennial. Photo: Otmaro Rodríguez.

Bordering a scarcely paved street, with small houses worn out by the years, is the gallery of Michel Mirabal, one of the Cuban painters with the greatest international projection in the last years.

Mirabal decided to set up his studio on the outskirts of the Havana town of Guanabo, on a plot of land where there had been nothing before. Only dust, dirt and a steep slope. He did it for a reason that resides on his roots. He named his studio Finca Calunga.

“I was born in a marginal neighborhood. I know what it is to live in a place where there are daily problems. When I started in the world of art and sold my first works I always said that I would love to work with children,” Mirabal said to OnCuba in one of the corners of his gallery.

“I had a grandfather who always taught me that children are the most important thing. That’s why I founded this place to welcome children and young people. This was a mountain where there was nothing and little by little, with a lot of effort, we built this dream that today is a reality,” he added.

For the artist, “it’s about sharing what life has given me with my work with people like me, who were born in marginal neighborhoods. They are the ‘social cases’ that exist in many places. Many people who come from other provinces in this community live in makeshift houses and children sometimes stop going to school. You see those things and try to support what you can. Also with orphaned children.”

In the context of the Havana Biennial, the painter received in his gallery United Arab Emirates Deputy Minister of Foreign Affairs and International Cooperation Yacoub Yousef Hassan Al Hosani, together with a delegation from his country. Mirabal talked with the visitors about his creative process and told anecdotes about his works and the interest they have aroused among several heads of state and personalities in various parts of the world.

Then they toured the gallery and he showed them the pieces of his new exhibition inaugurated in the first days of the Biennial. At the meeting, the delegation from the United Arab Emirates thanked the host with an installation of culinary art with typical dishes of their country.

Mirabal has exhibited in numerous countries and has a gallery in Austin, Colorado, where he must return in the coming months. During his stay in the United States he has become friends with figures of American culture and other artistic circles. In his exchanges, he says, the “Cuba” issue has always been present.

“I have always painted the Cuban flag, so it is also logical that they ask me a lot about my country. Journalists outside of Cuba have tried to get me to say what is and what isn’t. But what I have to say about my country I say it here. It does not seem right to talk about the things that happen in my house, but I respect the ones who do it. It’s not my case,” Mirabal says and recalls an anecdote linking his work to U.S. Presidents Barack Obama and Donald Trump.

“Trump bought one of my works in 2001, belonging to the Manos series. I think it was through his son, who bought it from a Cuban in a gallery in New York. That remained on the Internet and the media retook it when he reached the presidency. Obama has two. One donated by the U.S. Embassy in Cuba, and another that I sent him. Then he wrote me a very nice letter that I keep.”

What are your main concerns about the present and future of Cuba?

I do not want to see a Burger King or a McDonald’s in my country. I want more freedom for Cubans, but I would not like Cuba to be filled with the things that are in the whole world. I would not like Cubans to lose the need to smile or receive people with kindness. I also do not like the speed the world has, that’s why when I leave I always try to return to Cuba soon.

I wish we could fight against our problems and not wait for a crisis to open other doors. With crisis or without crisis, we have to open doors so that people can prosper through their own effort and have the quality of life they deserve.

Do you feel recognized in Cuba?

Not enough. I would love for people to know more about my work and have more space to show my work. That’s the raison d’être of curators or gallerists, but if they do not take me into account it might be because they think that my art does not have the quality to be next to that of other artists. Or maybe because of something else. For the time being, I’m here and try to show myself to Cuba and the world.

How have you perceived the quality of the works in this Biennial?

I find art anywhere, in any object. In past editions, as I personally told the director of the Biennial, there was a project that was in El Morro and grouped a number of artists. The public that visited the site could see in a single day many works, but in this Biennial it seems to me that everything is very dispersed.