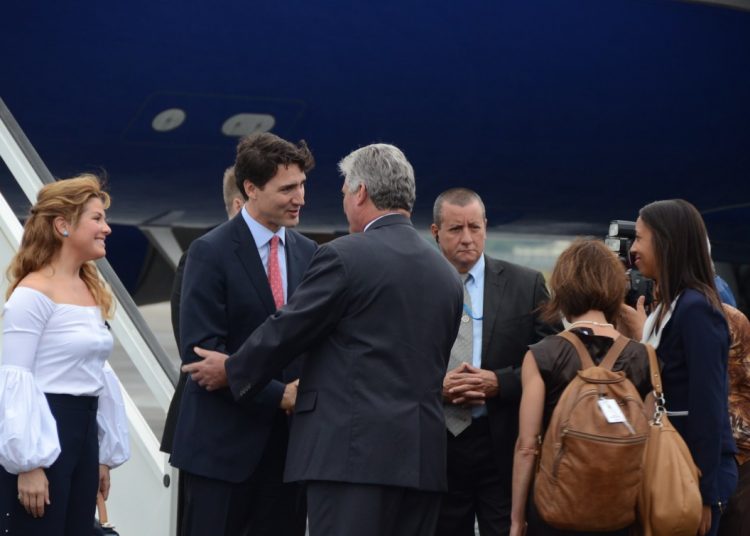 Upon his arrival to the island in November 2016, Justin Trudeau was received by Miguel Díaz-Canel Bermúdez, then first vice president of the Councils of State and of Ministers. Photo: Joaquín Hernández Mena / Trabajadores.

Cuban President Miguel Díaz-Canel and Canadian Prime Minister Justin Trudeau talked about the situation in Venezuela and the alternative of dialogue as a solution to the intense crisis in the South American country, the Cuban president announced this Saturday.

“I spoke with Canada’s PM, Trudeau. I emphasized the need for dialogue with President Maduro based on respect for #Venezuela’s sovereignty and International Law without threats or foreign intervention,” Díaz-Canel wrote on his official Twitter account.

The Cuban president did not specify when or how the conversation with Trudeau took place. He thanked Trudeau for “his opposition to the U.S. Helms Burton Act,” whose Title III allows taking to U.S. courts claims over property confiscated on the island after the Revolution.

Foreign Minister Bruno Rodríguez Parrilla also announced through his Twitter account that he had a “cordial conversation” with the High Representative for Foreign Affairs and Security Policy of the European Union, Federica Mogherini, to address the “situation in Venezuela.”

The foreign minister affirmed they will maintain this type of contacts.

He said he appreciated the European Union’s opposition to the Helms-Burton Act and confirmed the forthcoming EU-Cuba Joint Council meeting.

Cuba, a close ally of the government of Venezuelan President Nicolás Maduro, reiterated its support for the president during a failed uprising led last Tuesday by Juan Guaidó, recognized as acting president of Venezuela by more than 50 countries and who ordered the release of opposition leader Leopoldo López.

Guaidó asked the population to take to the streets to support this initiative, which generated the response of the forces loyal to Maduro.

Cuba condemned that action, described by Díaz-Canel as an “attempted coup d’état by the pro-imperialist right, with the complicity of the United States and the region’s lackey governments.”

Canada is among the nations that recognize Guaidó as acting president of Venezuela and that expressed during the meeting of the Lima Group, held this Friday in the capital of Peru, their full support for the “constitutional and popular process” to recover democracy in the South American country.

The governments of Argentina, Brazil, Canada, Chile, Colombia, Costa Rica, Guatemala, Honduras, Panama, Paraguay, Peru and Guaidó’s Venezuela rejected that this process be described as a coup d’état and demanded respect for the life and the freedom of the Venezuelans, as well as the liberation of those they consider “political prisoners.”

Cuba and Canada have maintained good diplomatic relations for decades despite the occurrence of mysterious health incidents that affected Canadian and American diplomats, which caused the embassies of both countries in Havana to only work with the indispensable personnel.

Ottawa announced this Friday that it will not “recognize or apply” any sentence issued under Title III of the Helms-Burton Act, which started being applied as of last May 2.

The Canadian government’s opposition to this U.S. law is based “on the principles of international law and reflects our objection to the extraterritorial application of laws of another country,” the foreign minister of the North American country, Chrystia Freeland, said in a statement.