Voices of Chicago are heard in Havana 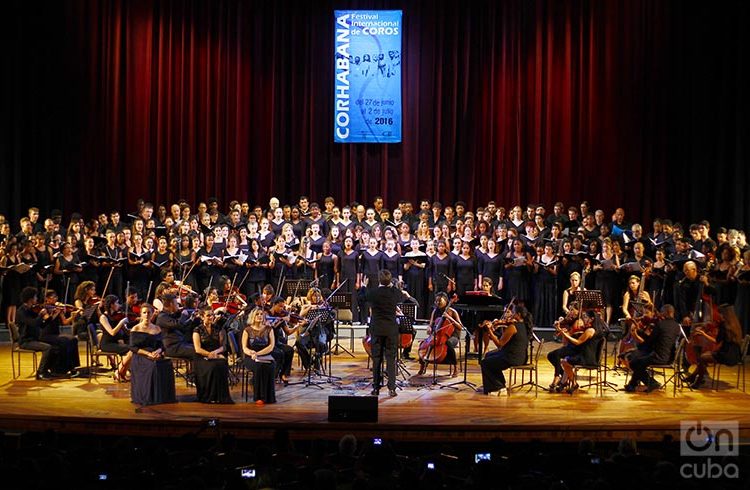 They joined the stage slowly, ceremoniously, organised. Gently they settled into their seats and began a flock of voices, perfectly matched, began, accompanied by rhythmic claps and movements.

They sang in English with an energy and beauty in their song that hypnotized. They were the children of Chicago Children Choir, an important part of the Voice of Chicago project which has worked for more than 60 years with minors from all over the American city.

A Change Is Gonna Come and We all live here are two songs in their repertoire, predicted an event that already took place: they were in Cuba as guests of the International Choir Festival, Corhabana 2016.

On the scene, alongside the Americans there were also small Cuban singers.

“I feel really blessed to be present at this event, the people are amazing and they have been very generous in welcoming us to this beautiful country. All of the people that I have met support the work that we do and the Cuban orchestras and choirs have really surprised me,” Alexa Moster, a member of Chicago Children Choir told OnCuba.

“We work with the Coro Diminuto (little choir) and I think that it is one of the most impressive children’s choirs I have ever seen. I can say that Cuba really appreciates the performing arts and art in general; so I’m happy that Cuba and Chicago have been able to collaborate.”

It was the choir’s first time in Cuba and everyone was happy, not only because of sharing music, but also because of getting to know the island’s other delights, said Josephine Lee, musical director of the group.

“Unfortunately the prohibitions that existed between the countries did not allow us to make the trip before; but the important thing is that this dream has already come true.”

“Today here are 60 adolescents between 12 and 18 years of age that represent a bridge of peace and love between our countries.”

“The Festival has given us this incredible opportunity to share. I know Cuban music because my parents liked it a lot and they listen to it at home. I love it simply because it is very rich and has many pleasant tasty rhythms,” said Estella Shiffrin, another member of the choir.

Within musical feast, the Chicago Children’s Choir performed a varied repertoire that included classical music, other Cuban composers (Son of Camagüey) and some more contemporary rhythms. Perhaps the surprise of the night was seeing them fluently cover The Gozadera by Gente de Zona and Marc Anthony in a choral version.

“We went to the place where Gente de Zona filmed the video and it was fun. The people passing by stopped and watched as we sang and danced,” says Estella.

“I have not heard much Cuban music, but I love La Gozadera; so I should say that it is probably my favourite Cuban song. When we learned it it was really fun and we staged for the Cuban audience that received it with great joy,” one of the girls, Alexa, says.

Their last appearance on Cuban stage was shared with voices from Venezuela and Argentina. A Gloria excelso closed the National Theatre’s curtains and put an end to the second edition of Corohabana 2016. Of course, the bridge stayed down for another visit.

The situation and development in Cuba

The situation and development in Cuba

Ten US cities connected to Havana by air