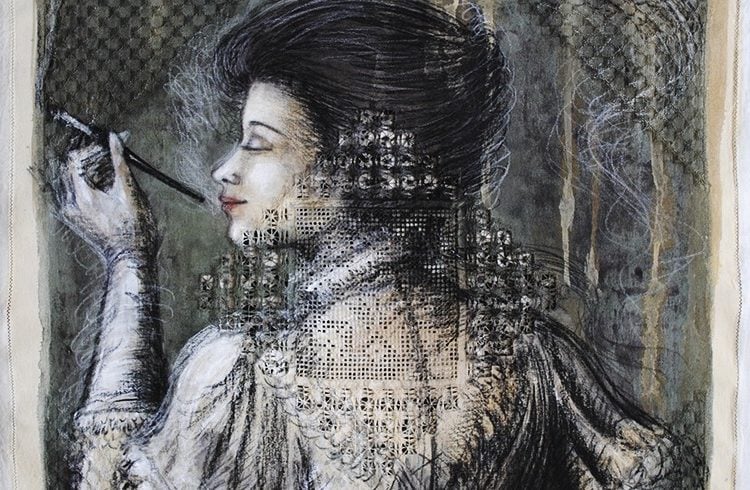 Yudit Vidal Faife has assumed from the visual arts a personal challenge: to rescue the traditional stitches of Cuban lingerie. Her challenge has a historical foundation: “when the sugar industry stopped being the essential sustenance of Trinidad, crafts maintained economically many families and women were the fundamental pillar,” she says.

The project Entre hilos, alas y pinceles (Between threads, wings and brushstrokes) that Yudit heads groups together twenty Trinidad craftswomen who cultivate unique and exclusive stitches – some from the 18th century and that have now been rescued: the natural cloth starts being filled with textures and the openwork or the crocheted applications are added to the cloth, and thus Yudit’s images come to life, as sui generis as Cuban.

The work of this artist has been exhibited in Italy, Luxembourg, Holland, Ecuador, France, the United States, Spain, among other nations, and the Universal Circle of Ambassadors of Peace – based in Switzerland and France – granted her the title of Peace Ambassador, a distinction that is given for the first time to a Cuban woman.

When Yudit was a child she would be given coloring books and she would start covering the figures. Her parents became aware that she “had a rare inclination” for creating her own designs, this young artist said to OnCuba. She was born in Santa Clara, but resides in the township of Santísima Trinidad, one of the best conserved in the Americas and declared by UNESCO a World Heritage Site in 1988.

At barely eight years old, Yudit Vidal (1979) expressed her interest for drawing something that, she confesses, “has been in my blood, in my feelings and is a talent one develops during one’s lifetime.”

A graduate from the already extinct Oscar Fernández Morera School of Visual Arts – then located in the colonial city of Trinidad – she continued her studies in Havana in the Higher Institute of Art (ISA), from which she graduated in 2008 with a degree in Visual Arts, in the profile of Restoration and Conservation of Movables. This specialty would equip her with a significant scientific wealth that would benefit her work. 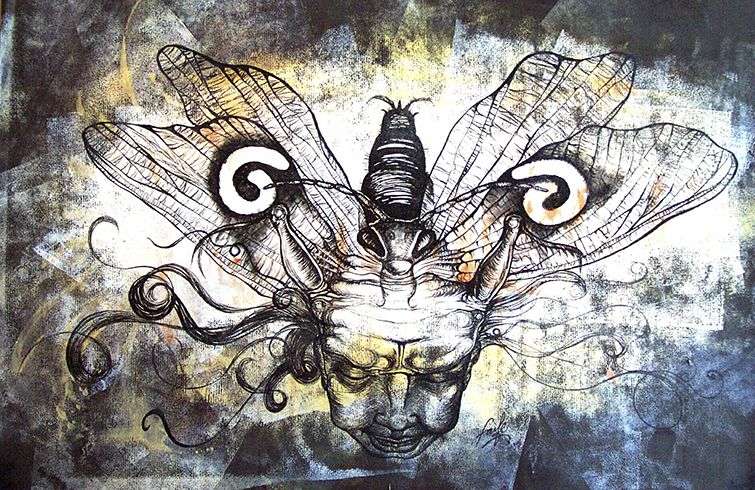 “Taking academic courses is not the guarantee to becoming a creator, because the artist is born with that talent, but undoubtedly the school offers indispensable techniques,” she said, while confirming that, for example, “knowing how to mix colors and knowing how they react chemically ensure that the work is everlasting or not.”

According to her, the contemporary artist “is no longer the Renaissance erudite” who knew a little of everything and that some creators, for example, “try to make an engraving or simply paint over wood, but they do not know that the fiber is not straight and, therefore, as time goes by, the piece deteriorates very rapidly. One should not be against the school and the so-called fine arts,” she emphasized categorically.

Contrary to what someone can imagine, being a graduate in Conservation, Restoration has helped her “a great deal” in her work, because “deep inside she bears the artistic creation” and she cannot separate both worlds she feels are very united. 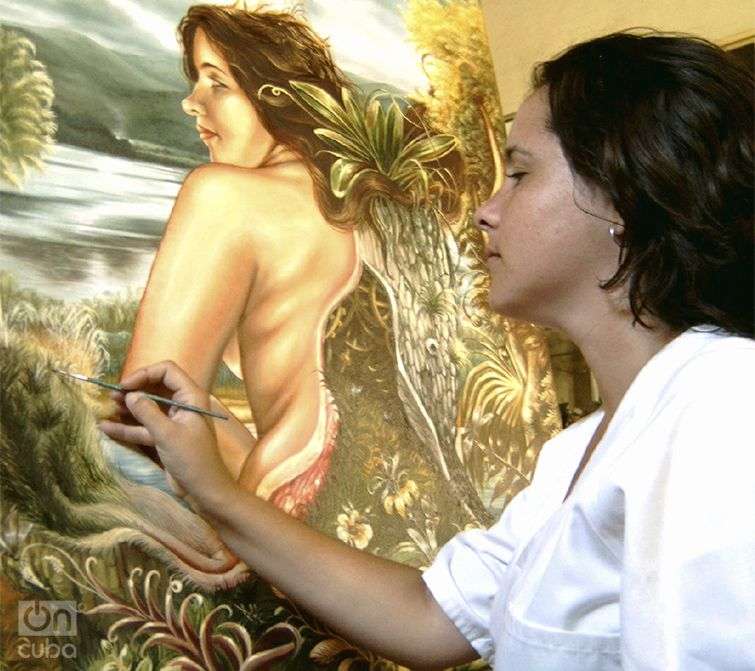 Yudit also exhibits a work as a designer of books, a passion that emerges thanks to the literature that incites her to imagine the words with shapes and even to outline the physical features of the characters: “I love children’s literature which has also been a source of inspiration. It is edifying.”

She deals with several subjects and does so based on series like Seres de la diminuta inmensidad (Beings from the Minute Immensity), for children and their contexts, where the portrait is the most used pictorial resource. She also deals with eroticism and femininity. Her series Entidades míticas (Mythical Entities) – which reflects the inner ego – includes caricatures of the character we assume in the face of certain interior problems that can affect us.

She gets her inspiration from Trinidad legends and displays drawings in white lines over a black or chiaroscuro background, for example, when she reflects in the series Detalle colonial (Colonial Detail) those characters that prowled the emblematic 18th century mansions and that are simply still there, according to the artist, to preserve and care for the history that lives in every wall, crack, or in the doors’ ironwork and the colonial carriages traveling through cobbled stone streets and that someone still hears in the quiet of the night.

Although she recognizes she “will never achieve the dreamed-work” because she feels that creation “is infinite, unlimited,” Yudit lives with the certainty that “something new is learned every day”: even with the intense years she has spent in the world of visual arts she continues always experiencing the same sensation of surprise of when she was a child and needed to transform the books based on her particular visions.

Salon D’Luce: The Light of Entrepreneurship