by Michel Contreras
in Baseball
0 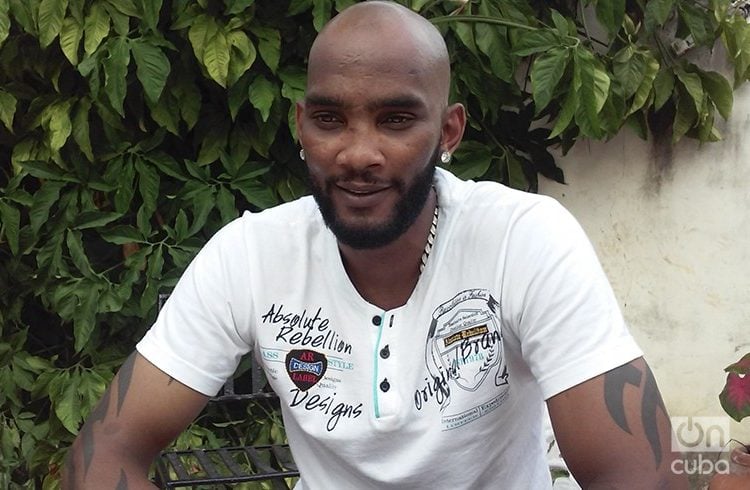 There’s a rare species that does not mutate with the atmosphere’s changes, and when returning from glory – that remote land – continues looking with the same eyes as before; without frowning more; shaking hands with the same warm fingers; sitting the same way.

The active Cuban with the most seasons in the Major Leagues belongs to that species. The only difference in the Alexei Ramírez who left the island in 2007 and the one I have in front of me is the accent and, a bit more, the look. The player from Pinar del Río now has a beard that marks the tendency in baseball. Some big tattoos battle to be noticed on the dark night of his arms. Two pompous earrings adorn his ears. Enigmatically, there isn’t single new pound on his body.

I was able to reach him thanks to the kindheartedness of Luis Giraldo Casanova, who organized the meeting and offered his home. Alexei waits for me in the back, after the lateral hallway, almost on the edge of the patio. The first thing that caught my eye was that he smokes. The other is that he smiles with a schoolboy’s shyness. In a quiet voice, he asks: “Will we take long? The thing is that I have to train in a short while….”

He has been an All Star, was a runner-up in the voting for the 2008 Rookie of the Year,1 has two Silver Slugger Awards (2010 and 2014), eight seasons in the world’s best baseball, and he seems to ask me to please not take too long. “The thing is that I never stop training, not even during vacations. Out of season I practice from Monday to Friday in Miami, and go jogging on Saturdays and Sundays.”

While he speaks, I think of Casanova – who is a few meters from us – and of Niño Linares. Both of them had better natural conditions than Alexei, but none of their 3,900 hits were in the Major Leagues, which is baseball’s Scala of Milan. I think about them, my idols, and I feel it is impossible to compare their feats with those of this dark-skinned man of five seasons with 15 or more homeruns, three of 20 or more stolen bases and six continuous runs surpassing the 150 times he went out on the diamond.

I try out a “thank you very much” making an effort to hide my admiration. I resort to the word “privilege” and assure him that we won’t take too long. He takes a drag from his cigarette, lets out a bit of smoke and – “almost without why / almost casually” – recalls the night of March 31, 2008 in Cleveland….

I can’t forget it because it was my debut. It was very cold and the opponent pitcher was C.C. Sabathia, who had just won the Cy Young. I didn’t know how to stand in home. I was very nervous, I tried to control myself but couldn’t. I felt excited. Imagine, without passing through the Minor Leagues, I was already the centerfield and sixth bat of the White Sox, and it was my turn to make my debut against that southpaw. That night I left with 4-0 and three outs.

During that season you had a dream year with 21 homeruns and 77 pushes, including a record for rookie with four grand slams. Why haven’t you been able to repeat that season?

Over there all the pitchers are professionals, and just like I adapt to them, they adapt to me. There’s a great deal of videos, of study and report, and one has to constantly be making adjustments. Sometimes I have come close to repeating those numbers, but I haven’t been able to achieve them. And I don’t believe it has to do with the defensive exigencies of the shortstop’s position, because in the end I’m playing the position I like the most.

In the National Series you almost always defended second base. How come you transferred to shortstop?

I asked for it myself. All my life I liked the shortstop because it demanded being in constant movement. When I got to the National Series, Onel Olivera and Reinier Capote were in the Pinar del Río team, and moreover it was said that I was too tall for that position. But as you can see, the majority of the shortstops of the Major Leagues are men who are six feet tall and more.

Why did you leave Cuba?

Because of family reasons. My wife had finished studying medicine here, she was returning to the Dominican Republic and, at that time, we already had two children. So I left, spent four months in her country and then passed to the United States to play for the Major Leagues.

Did you have to make many technical adjustments, or of mentality, to adapt to the Major Leagues?

None. The same Alexei from here is the one that’s over there. If I change I wouldn’t be myself: I always say that the very baseball player is the one who saves himself or sinks. Contreras [José Ariel] helped me a great deal when I got there, making me see that above all it was the same sport with four bases and a ball. And that was what I did ever since I got there: have fun.

The time has come for a change of club, the San Diego Padres. Did you like being in Chicago?

It’s great. People stopped me in the street, greeted me, encouraged me…. Everyone recognized my dedication and commitment, because I’m a ballplayer who likes to play every day. What I like is to play baseball. The day I can’t stand the pains I will say so, but until now there are no signs of that.

What is the secret to remain eight seasons as a regular first-team player in MLB?

It’s simple: working. It depends on oneself, on the limitations one imposes on oneself. I’ve spent all my youth in baseball, and there’s a time in which you become the pillar of the family and you have to make more sacrifices and give back everything that the people have done for you. That’s why it’s necessary to train and train. That’s why right now, in López Peña,2 I don’t stop preparing myself, no matter the irregularities of a field full of cattle.

In 2015 you had your worse offensive season in the Major Leagues.3 At 34, could you have started the sports decline?

That is circumstantial. Baseball is very difficult and there are too many things that can affect a season. For example, the mind. If it doesn’t work well, you can’t perform well. Several problems piled up and that affected me, there’s always a first time. But I still have years to play, thank God. I haven’t had lesions and I prepare myself a great deal.

Your percentage of stolen bases has decreased.4 Could it be that you have lost speed?

No. What happens is that I receive orders and that can’t be done on one’s own initiative.

It calls people’s attention that here you were never prone to trying to steal….5

Bases are not stolen here.

Do you think Cuban baseball has lost quality?

Suffice it to say that it was difficult to get into the Pinar del Río team and now anyone can do it.

Which pitcher and batter impress you the most?

How do you consider yourself in the personal plane?

I’m an unassuming person, very much a people person, who gets along with everybody and likes children a lot. My tastes are a bit strange, because more than going to the beach or out, I love playing dominoes, sharing with friends, playing barefoot….

The thing is that the first years I was over there I had the children in the Dominican Republic and my mother was in Cuba, I felt very alone and the only peace I found was listening to Cuban music with a cup of coffee and a cigar.

Are you satisfied with your career?

I have the same dream as everyone, which is to achieve a ring7 that would round off my career, because I have already been an Olympic champion. But I’m happy with what God has given me; I don’t have to ask him for more.

Would you be willing to join the Cuba team again?

I always say that I would be the first on that list. I hope that happens before I retire. It’s very nice for Cubans to feel proud of me.

After winning several millions of dollars as a professional, do you continue seeing baseball with the same love as before, or has it now become solely a means for making a living?

Baseball is not just about money. Baseball is loved and enjoyed. I’ve loved it since I was seven years old, when my mom didn’t want me to devote myself to that and she was set on my being a doctor, because my academic grades were very good. I remember that when I went to my first provincial game, I returned home and told her that I was going to be like Casanova. That is to say, I already had a notion of what I wanted to achieve in the future. Since then time has gone by, and I continue giving it all on the field.