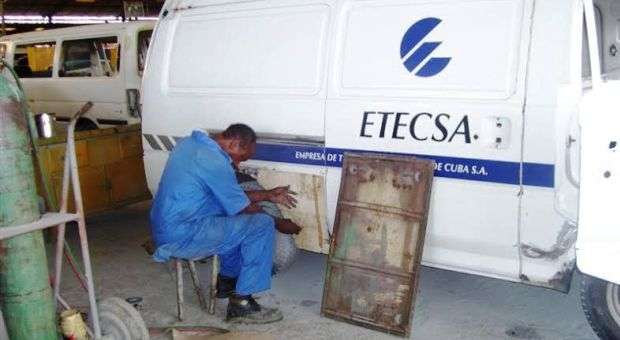 Denis, Manuel and Celestino became more than four months ago , along with other 52 people, members of a cooperative that rebuilds motor vehicles. Located in the Cerro municipality in Havana, this is one of the first non-agricultural cooperatives formed after the implementation in Cuba, as an experiment, of the new management model. Although their purpose remains the same as when they were employees of the Provincial Motor Transport Company of Havana, which is to offer services of bodywork, paint and upholstery to legal and natural persons, now they feel more motivated to work. Currently, in addition to higher profits, they have the opportunity to take collective decisions “that previously relied on the direction of the company.”

For example , since the cooperative was formed last July 1 as a result of the prerogatives granted by Decree -Law 305 of the Cuban Council of State ” In non-agricultural cooperatives ” , the partners agreed to buy already prepared lunch and deduct that expense of the profits of the group , which also allowed them to streamline work processes .

Marcelo González- president of the Board – explained to OnCub that these powers have allowed streamlining work processes. Before establishing as a cooperative it used to take them 60 days to finish a car, now they reconstruct it in about 30, because if you miss a product or a tool breaks we can solve the problem quickly , without the need to consult other bodies. Hector Caballero – Head of Technical Services of the National Transportation Telecommunications Company SA (ETECSA ), one of its largest customers , said the quality of service has been higher in these four months and is now ready to deliver vehicles ready to roll.

“With our work we will increase the life of the car in five years “, bodywork specialist Denis Sierra says proudly.” REX Agency Car Rental & Limousine and Cubataxi are other of our major customers. Moreover, the repairs of the ambulances of the Integrated Medical Emergency (SIUM) are also a very important contribution: we know how necessary they are for medical service to the population, “the president says.

But the early days were of great insecurity for some partners, he says. “They were facing something new and there was uncertainty as to the economic aspect, because now if there is no production they don’t make a salary.” As Grisel Tristá , head of Group Implementation Guidelines for Economic and Social Policy , noted ” the cooperative is a form of collective management , in which its members must be able to cover his expenses with income and earn according to each contribution . “

As established by Decree -Law 305, cooperatives are formed on the basis of the contribution of goods made by the partners. In this case each operator for membership contributed an equal amount of money to the collective fund. In this regard, the International Cooperative Alliance (ICA ) argues that the economic interest of the cooperative is embodied in two ways: the initial contribution and benefits received as the results of their management.

In this regard, the Regulation of Cooperatives in Cuba specifies that members receive each month an advance of profits that are in proportion to the quantity, complexity and quality of work of each. Then, the total income at the end of the fiscal year, they proceed with the payment of obligations to the state budget, the other expenses incurred in the production process and they create a fund for the required reserves. Finally, out of the net profit obtained, the General Assembly determines the proportion to be distributed among the partners.

Marcelo Gonzalez ensures that in his cooperative partners earn more than when the shop belonged to the state. Furthermore, “illegalities have been removed and all the money enters as collective gain and we pay relevant taxes. Attitudes have begun to open up and everyone appreciates the new way of working “.

Another principle that according to Decree -Law 305 supports the development of cooperatives is “collective decision and equal rights among partners ” [1 ] . In this regard , Professor and researcher at the Center for the Study of the Cuban Economy Camila Piñeiro explains that in a cooperative “all members are human beings with equal rights to participate in decision making [2 ] , ( … ) there are no patterns and subordinates but an organizational structure and a technical division of labor that have been collectively designed and approved ” . [3]

“Decisions are made jointly by all”, “we have a saying, and our suggestions are taken into account “were some of the recurring phrases in the opinions of car painter Celestino Garcés and platers Denis Sierra and and Manuel Martinez. In this regard, President Marcelo Gonzalez confirmed that in the General Assembly members decide the way of the cooperative goes and that they meet whenever the members deem it necessary. For its operation, the cooperative also has a Board of Directors which is composed of the president and his deputy, a secretary and two cooperative members elected by the majority. Similarly, there is an Administrative Council composed of the same people and other cooperative Specialists that are those of Business and Economics and Assurance. At the same time , it works a Commission of Control and Supervision which consists of three members who are not members of any of the above bodies and ” has the function of monitoring compliance with the laws, and the use of financial resources ” [4] .

A differentiated service to individuals

As a result of democratic management, one of the decisions taken by the members of this cooperative was to transform the service that is offered to individuals. When belonged to the state company was only allowed to do the labor and customers had to provide the materials, the prices for these people in the market are very high. This mechanism generated illegalities, obstacles and delays in service.

From the establishment of the cooperative, the partners decided that they would provide a complete service that includes labor and materials and the price should be determined depending on the complexities. “Painting a car can go approximately up to 350 CUC if it doesn’t have great complexities, which was lower than charged in private establishments involved in this activity. However, we know that to this service most of the population who have a car cannot access, only a small section that handles freely convertible currency. In comparison, the services we provide to state enterprises have higher fees, which behaved that way even before the emergence of the cooperative, “the president said.

In the opinion of the members and the client interviewed, the main problem now is related to imported supplies. For Hector Caballero, Chief of Technical Services of ETECSA, “the ideal for this cooperative to achieve providing service of excellence is that the supply of the products has the same speed with which they work.”

Although in the country’s retail market you can buy certain materials, there are others like rigging, special paints and powder for which they are dependent on importing firms. “We have been looking for alternatives but sometimes it is impossible to replace the material and we have to wait,” Marcelo González explains. However, he points out, “if we are giving many powers and have the ability to solve problems that is what we are supposed to do.” Examples like this, the one of the largest associations formed so far in Cuba, show that while some troubles are still unresolved, the more than 150 non-agricultural cooperatives formed so far on the island, and its first results show positive and be positioned as a management model able to breathe new life into the Cuban economy.

Teresa Parodi to sing in Cuba