With 1,500 users on Telegram, “Dando y Dando” is one of the many collaborative groups where clothing, toys and other products are exchanged for food, toiletries and medicines that have disappeared from state stores and are very difficult to find on the black market.

yeny garcia
in Economy and Business
0 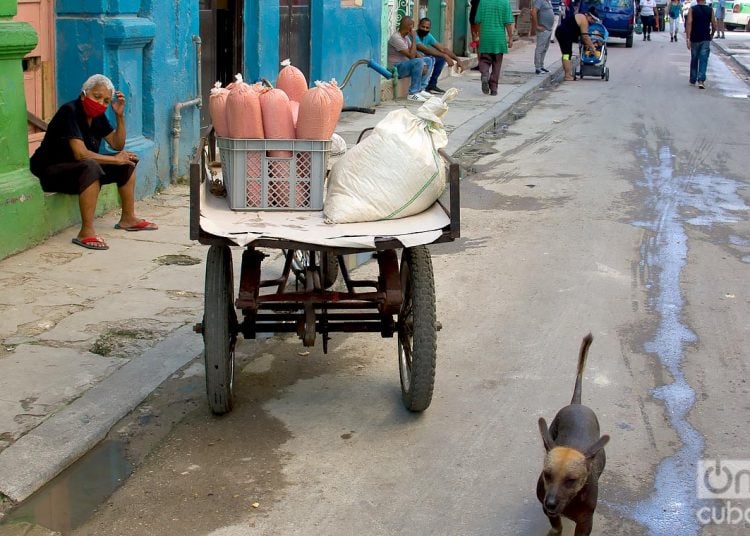 The pandemic has affected economies and aggravated the already existing crises, as in the case of Cuba, where the cyclical shortage in state stores keeps its inhabitants constantly on the hunt for essential items. Photo: Otmaro Rodríguez

“I give a new Captain America toy. I need chicken, milk, wheat flour, or detergent. Open to proposals,” reads a bartering channel on social networks created by the Cuban ingenuity to try to alleviate a chronic shortage that the COVID-19 has exacerbated.

With 1,500 users on Telegram, “Dando y Dando” is one of the many collaborative groups where clothing, toys and other products are exchanged for food, toiletries and medicines that have disappeared from state stores and are very difficult to find on the black market.

“It’s almost like going back to the stone age, but it’s what there is,” Silvia, a 42-year-old state worker who has been at home since the beginning of April, when Cuba was almost completely paralyzed due to the coronavirus, laments to EFE.

The procedure is simple, says Silvia: “I look for someone in the group who offers what I need, I contact him privately and we arrange to meet for the exchange.”

“Sometimes I have had to meet the other person at a midpoint because neither of us had a car when Havana was without buses. I have resolved a package of milk here and another of coffee there, bartering them, first for clothes and then for other necessary things such as detergent,” she explains.

The pandemic has affected economies and aggravated the already existing crises, as in the case of Cuba, where the cyclical shortage in state stores keeps its inhabitants constantly on the hunt for essential items.

Many compare the island in pandemic with the Special Period, as the economic crisis of the early 1990s is known in the country, the worst in its recent history and a feared ghost revived with COVID-19.

In addition to the lack of liquidity, inefficiencies and the intensification of the U.S. embargo, there are delays in the import of products and raw materials, together with serious problems in domestic supply.

The result has been long lines where Cubans spend hours and risk their health to make regulated purchases of basic items such as chicken, oil, detergent and toothpaste, to name some of the scarcest and most sought after.

“Those are the ones who are in the ‘hit parade,’ but there really is a lack of everything here, even coffee and let’s not talk about toilet paper,” laments Yosander Fernández, a university student who has had to take over the shopping to avoid risks to his parents who are in their sixties.

In July, the Cuban government opened several stores in foreign currency that are better supplied than stores in national currencies, but “we all don’t have family abroad to send us remittances,” insists Fernández.

If the arrival of mobile data in 2018 already expanded the use of the internet, with the mobility restrictions caused by COVID-19, digital interaction soared among the islanders, who found in that ecosystem the perfect space to collaborate in times of need.

“The idea is that today I will help you and tomorrow you will help me,” says Laura through Telegram, one of the most popular messaging applications among Cubans and where channels proliferate with as many purposes as there are needs.

That network, however, has been out of service in Cuba since last Wednesday, which has caused concern among its users.

The diverse groups in “Dónde Hay” update on the supply of chicken, coffee, toiletries and milk in stores. A wide community of collaborators publishes the address of the store, the name of the product and even the size of the lines, in formats pre-established by the administrators.

More recently “Dando y Dando” and “Segunda Mano/Habana” have served to facilitate exchanges and purchases between individuals. Each province, and even municipality, has its own groups and networks.

From toys, cakes “for all occasions,” clay pots or pregnancy tests to medicines, chicken, wheat flour, detergent and, “above all, milk, in any of its formats,” is bartered in “Dando y Dando,” Laura adds.

Each user indicates if they want something specific or “are open to proposals,” the place where they reside and if they have transportation.

“This bartering thing has its quirk. At the beginning, in July, people changed what they had at home or what was left over from the ‘combos’ bought at online stores, but there are already those who buy with the change in mind. If you see something highly sought after, you buy it even if you don’t need it because you know you can use it to get something else that you do need,” she says.

According to its description, “Dando y Dando” is a “channel created to facilitate the exchange of products in the current economic situation” and they clarify in capital letters that sales are not accepted. At “Segunda Mano/Habana” they insist that they only offer secondhand items.

Administrators and Internet users thus guarantee that the government’s sights are not set on this channel. The government has declared war on resellers and uses the networks as one of the ways to catch them.

The “mules” of hope

Seven months without commercial flights have cut the supply chain of the Cuban black market, where what is usually lacking in the state network of stores is usually found.

The exit ban has left grounded the “mules,” Cubans with dual nationality or long-term visas, who travel with suitcases loaded with medicine, food, electronics, beauty items and even bicycles.

The prolonged closure has emptied reserves and raised prices for products such as imported shampoo, which if it appears, does so for triple its price.

However, all this could change soon. The entry of the country into the “new normal” as of this Monday, October 12, includes an imminent opening of borders, which would provide the necessary oxygen to a reality that was already harsh before COVID-19.