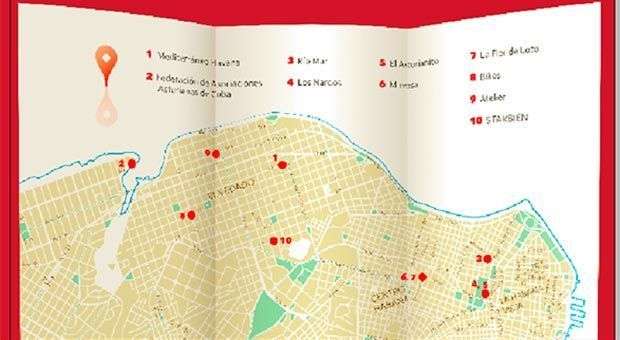 Christmas and New Year’s Eve dinners in Cuba are beginning to take off in a different way. Modest but continuous economic growth has created a more cosmopolitan attitude among our people, and traditions are becoming more international. Now just having dinner with the family is not enough—more Cubans are dining out. OnCuba has a few suggestions for places where you can spend these important holidays with family and friends. 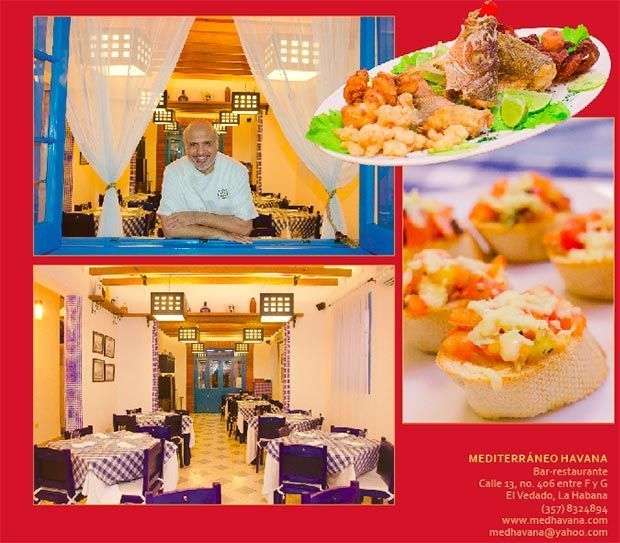 This recently opened restaurant proposes a “cena sarda,” or Sardinian dinner, by Italian chef, Luigi Fiori, featuring a cuisine from that Italian island with the tropical twist of Cuban products. A Mediterranean flavor at  the New Year’s Eve table invites diners to roast kid, charcuterie and fresh cheeses, spinach raviolis and gnocchi, all artisanal using their own raw materials, a distinctive hallmark of this eatery. For Christmas, the special offer features turkey.

This restaurant stands on the banks of the long kiss between the River Almendares and the sea, and features exquisite taste and attractive interior design. Chefs Alberto Jesús Álvarez and Jorge Luis Méndez base their work on traditional Cuban cooking, and in line with the tastes of these times, use totally natural ingredients. The chef’s suggestions provide a varied menu depending on what fresh products are available, which probably contributes to the creativity of the dishes served here; surprises can always be found. They recommend the Río Mar fish platters, featuring grilled fish served with octopus, potatoes, paprika and parsley.

Federation of Asturian Associations of Cuba 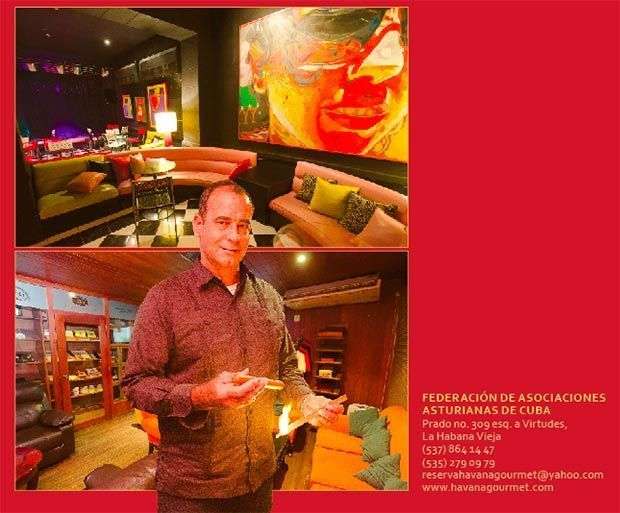 Three restaurants—La Xana, El Gijonés and La Terraza—a bar with live entertainment, and a Cuban cigar collection all come together under a single concept: Havana Gourmet restaurants. José “Pepe” Rey Hernández calls his style “21st century Cuban cooking,” and he invites you to an a la carte New Year’s Eve dinner at any of his three restaurants. At La Terraza, he recommends the stewed and charcoal-grilled leg of lamb. At El Guijones, the suggestion is for honey-lemon chicken, lobster with Cuban-style sauce, and a mixed grill with Cuban-style pesto sauce.  La Xana, which serves Italian-style dishes, will feature seafood lasagna with squid ink crepes, and raviolis stuffied with spinach in white sauce.

For some time now, this has been one of Cuba’s best-known restaurants, featuring soft lighting, specially-designed furniture, live music and very efficient service. The romantic atmosphere at Los Nardos makes it a favorite for couples celebrating their anniversary or who are just starting out. Ángel Ochoa, chef for the last eight years, recommends the fried chickpeas, Fabada Asturiana (bean and sausage casserole), and Los Nardos Paella. There’s one thing that certain here, and it’s the pride of this restaurant: if you come once, you’re sure to come again.

Right across the street from the Capitolio building, El Asturianito serves a very wide range of Italian and Cuban cuisine. It is well patronized by Cubans and foreigners alike. The quality/price ratio is something for which it stands out, making it a favorite among many customers. Its high-quality pizzas are much appreciated. Ángel Ochoa, chef of the Los Nardos complex and also of El Asturianito, recommends the Pinar del Rio-style pork chunks, seafood risotto, and yucca gnocchi.

Fresh pasta is one of the prides of this restaurant in the Centro Habana neighborhood. For special year’s end meals, founding chef Jorge Ortega offers us lobster mousse ravioli in shrimp sauce. Another recommendation is the fettuccini al funghi, a delicate dish in sync with this restaurant’s ambience. Mismosa achieves a balance between traditional Italian cooking and Cuban flavors. Don’t forget to a order a Mimosa cocktail for starters. 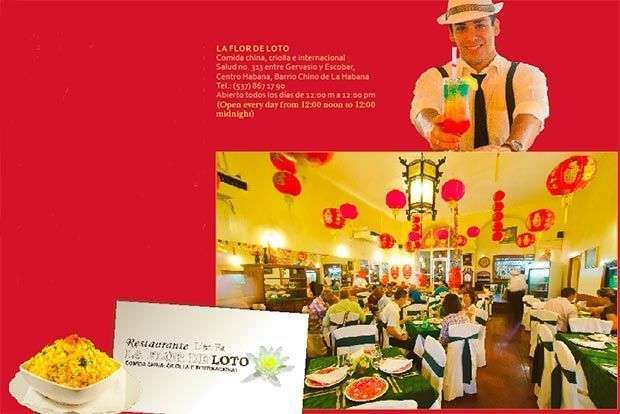 La Flor de Loto is one of Havana’s mos popular restaurants. Its chef, Silvino Hernández, has 60 years of experience, and proposes a few of the more than 120 dishes served here. For Christmas dinner, he invites us to enjoy pork spring rolls stuffed with bacon, parsley, egg, and white bread crumbs. He also suggests the whole roast chicken in strawberry sauce. Both dishes were designed to be shared by a couple, and come with apples, grapes and a bottle of sidra (traditional Asturian hard cider). This restaurant’s good quality/price ratio has fostered its reputation. 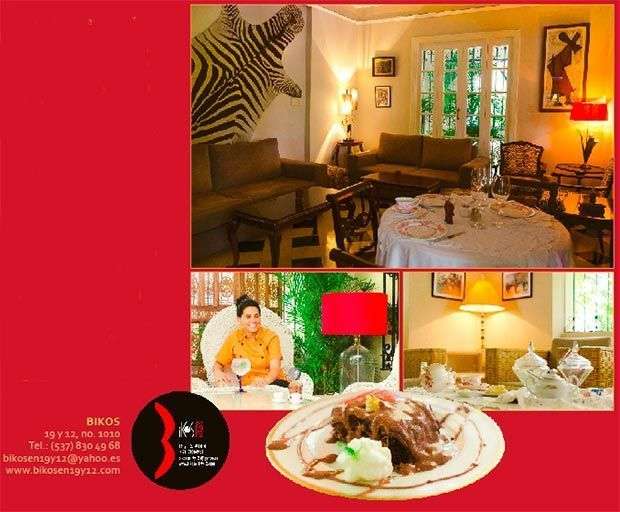 “You always eat best at your home, followed by my home.” That is the slogan of María del Pilar Fernández, the Asturian owner of Bikos (which means “Kisses” in Galician). Comfortable, fresh, modern, designed as a gathering place for friends, or the place where you end up after an event, no matter how late. Chef Maday González will prepare a traditional Spanish menu for Christmas and New Year’s Eve. The gastronomical concept is Spanish home cooking. Seafood appetizer, baked fish and lechal de cordero asado (Spanish lamb) will be some of the dishes featured. And the traditional 12 grapes will be eaten with each strike of the bells from Puerta del Sol at midnight, along with the other Spanish New Year’s Eve traditions of streamers, garlands, whistles and masks. When visiting Bikos, it is important to taste its homemade desserts: “death by chocolate,” “grandma’s cake,” and coffee flan. 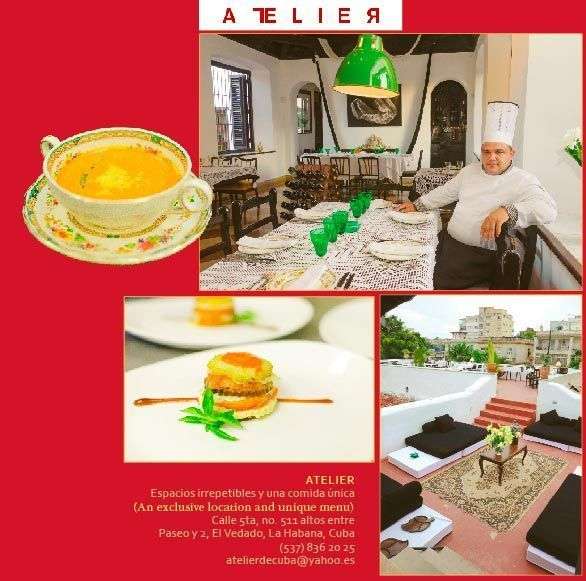 Atelier means workshop in French. Here, many restaurant business rules are broken to achieve attractive results. They say that its patrons are not customers, but friends of the house. This December, chef Amílcar de Sousa will premiere a menu with novel dishes that include interpretations of Mediterranean and Asian cuisine. Christmas and New Year’s dinners will be a la carte. Recommendations for these months: the Poseidon platter, featuring five elements of the sea cooked in different styles. Other offers will include rabbit coated in olive oil and lemon zest, and two of the house classics: duck in orange zest and dried fruits and nuts, and lamb in chocolate sauce on a base of pasta seasoned with capers. For the quality of its service, Atelier received the Quality Gold Award from France, and owner Niurys Ysabel Higueras was invited this year to an event for Latin American women in business in several U.S. cities. 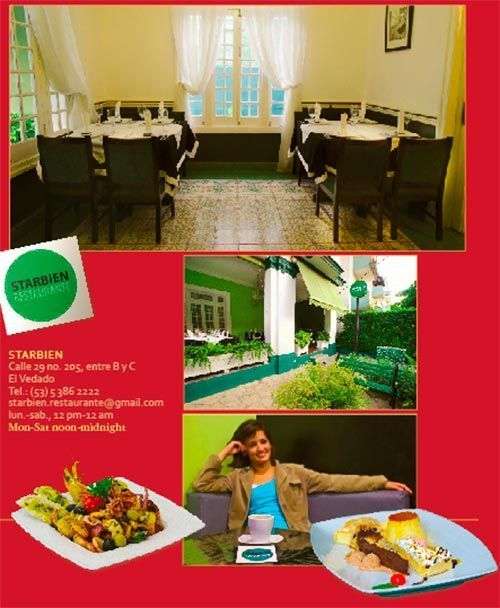 Two tasting menus have been prepared by Starbien for two special Fridays in November and December. The goal is to promote cuisine that is rarely on the everyday menu, a getaway from the routine that will make these dinners unforgettable. For the evening of Friday, Nov. 29, the offer will be: welcome cocktail; seeded bread with seafood butter; sushi; swordfish fillet brochette on teriyaki sausce served with Eastern-style rice; and for dessert, Anko in tempura with black syrup (Japanese dessert).
The menu for Friday, Dec. 28 will be similarly attractive: welcome cocktail; pesto bread; seafood bisque with moet chandon garnished with black caviar; lemon and mint sorbet; roast beef in fines herbes with Sauce chasseur; and to top it all off, cream puffs filled with natural fruit ice cream. Each menu also includes two beverages. We recommend reserving early, because only 20 seats will be available for each dinner.