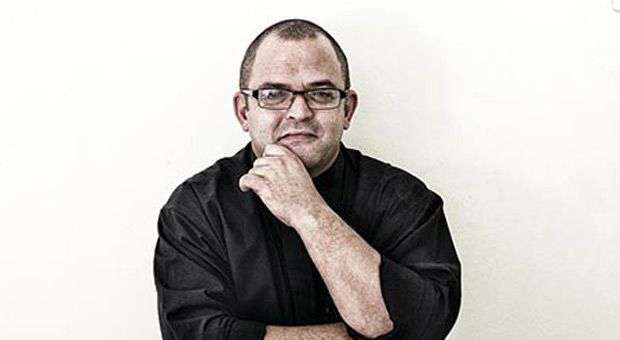 Sergio really is as young as I was told. He has a pleasant face and a receding hairline, both of which give him an intelligent appearance. Appearances are not deceiving. We sit down to have a chat in his living room.

He was ordained as a priest in 2007. Before that he completed his nursing studies and then enrolled in the Faculty of Medicine, where he remained until his fourth year. His religious vocation led him to ask for a two-year leave, and he enrolled in Havana’s San Carlos y San Ambrosio Seminary. Three years later went by, he remember the leave, but it was not too late; he was where he wanted to be. “That day I said to myself: this is what God wanted for me.” Now he is a doctor of the soul. While he had never planned to be a priest, there were signs that led him to the priesthood. With a knowing look, he admits “My father was a staunch atheist. My first religious memory is of a Saint Barbara icon in the back of a closet, behind the clothes, where my grandmother would secretly take me to pray. My life has been marked by curious signs, which is why I don’t think that it’s a coincidence that I am here today. December 17 is celebrated as the day of San Lázaro (Saint Lazarus); I was born in 1971 (71 in reverse is 17); I’ve always lived at 17 Patrocinio street, and providentially, I was baptized on the 17th of December.”

They bring us coffee and we take an obligatory pause in our conversation. The cups are large and the aroma is pleasant. The coffee is divine. We laugh…. “There are three things in my life that are non-negotiable: one is my priesthood; another is my love for the Church; and the other is remaining in Cuba. I am a Cuban from head to toe,” he says passionately.

Recently, Father Sergio has caused a stir in religious circles: he restored the sanctuary’s icon of San Lázaro to its original image. After a Biblical, theological and documentary investigation, he decided to restore the bell, sheperd’s purse, and clothing of a poor man—as the Bible describes them—that had accompanied the original icon since 1702, when the sanctuary was founded. Now it is closer to the representation that most of its devotees have. In the past year, a little over one million people have visited the site. “It is very difficult to get your message through to all of these people, who come with their codes and all of their existential baggage and a lot of ignorance, and you must to convey to them that God loves them, that he is not punishing them, that there is a light, and that it must be sought.” He speaks calmly despite the responsibility to which he must be subjected in a place like this, with so many stories and sadnesses, hopes and joys. Being the rector of El Rincón is an everyday challenge. Sergio has created a small museum that displays many of the promises made to San Lázaro; he also brought dignity to the spot in the sanctuary that holds a marble model that won sculptor Jilma Madera the 1958 contest to make the Christ of Havana monumental sculpture. The model was rescued from the oblivion of a back yard by another priest.

I can’t avoid asking him about celibacy. He laughs, apparently expecting the question…. “I had every possibility not to be (celibate). But there are three factors with have caused me to be celibate. The first is a mystery, a mystery of God’s grace; the second, my personal relationship with Jesus Christ. I am celibate because He is celibate. And the third is doctrinal. The Church asks us to be celibate. If some day the Church were to say that we could get married and have children, I think I would continue to be celibate. I offer everything that I have to God—my strength, my youth, and my virility. Everything.”