“Whoever wants more is greedy” 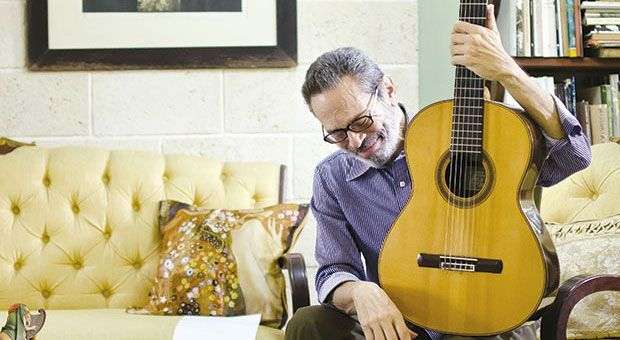 Leo Brouwer, one of Cuba’s most prestigious musicians, welcomed us at his home for a conversation about the chamber music festival that carries his name. For more than an hour, Leo and his wife Isabelle2 described some of the new features of this year’s festival.
This time we are going to have more attractions than in previous years. More than 300 artists and musicians from 11 countries are participating, with an extremely wide range of compositions and musical genres. We will be in Havana, and will have several performances in Santiago de Cuba (Sept. 24 and 26) and Pinar del Río (Sept. 27). In 2014, perhaps we’ll be able to go to other cities on the island, because our intention is to keep growing, find more talented musicians, show the public new repertoires, and dust off sheet music that, for one reason or another, has not been touched by our musicians.

We knew that jazz, trova, flamenco, electronica, and pop were being included…and we wanted Leo Brouwer to explain to us how all of these genres were joined together in a chamber music festival.

All over the world, symphonic musicians, those from academia, and the major orchestras are still in love with the classics. And I love the classics, but I thought it was necessary, or I should say, essential, for the public and artists to open up to other sounds, to more contemporary proposals.

Prejudice should not exist in music, and the meaning of the festival is to add, not take away from, genres and musicians, much less generations of artists. That is why the event will bring together well-known individuals who have followed very different careers. We like disarranging roles: playing early music with modern instruments, for example. At first it was difficult to convince the musicians to do something different than what they are used to doing, but we’ve managed to do it, and one of the reasons is that our festival has no sense of emulation. We are not interested in the least in having people compete or become caught up in undermining each other. The idea here is to rediscover ourselves, find ourselves again, and get to know each other. These festivals have brought together a large number of professionals, new friends, people who have never seen each other before, who never would have become involved through that magic word, friendship, which makes me so proud, and which is also the meaning of our festival.

Every year, the Leo Brouwer Chamber Music Festival premieres works by great Cuban musicians of the past that leave the public breathless, works that have not often been performed on the island. Does this year’s festival also have premieres?
Of course. Every year we try to get away from the usual repetition of repertories by orchestras. We will have premiere performances of works by 19th century composers from Santiago de Cuba, such as Cratilio Guerra and Laureano Fuentes, the fruit of research by Cuban musicologists led by Miriam Escudero. In Cuba sometimes it is hard to play certain concerts due to a lack of instruments. Until this situation changes, we must be creative. It is important for us to include in our program the works of greats such as Ernesto Lecuona, Alejandro García Caturla and Hubert de Blanck, which are only performed (when they are performed) at academies, and rarely taken to concert halls.

According to what you announced at the press conference, this year’s festival will be dedicated to humor…
A lot of people might not know about or remember the musical theater of 1960s Havana. During those years, great works were done that were never staged again. A little while ago, I came across and decided to recover notes from a concert that I wrote for a musical some time ago. I recuperated pages from that sheet music and reconstructed them for Osvaldo Doimeadiós, who will be there on opening night as the central figure, with a work called Concierto para dedo y orquesta (Concert for finger and orchestra). We will also do excerpts from A Musical Joke, which Mozart composed to make fun of himself and his historical moment. The show will also have [the a capella group] Vocal Sampling, young pianist Jorge Luis Pacheco, and actors from the Humor Promotion Center. This opening show for the festival in Havana will be called Humor con clase (Humor with Class), and will be held at the Sala Avellaneda of the Teatro Nacional.

Would you tell us a little bit about this year’s tributes?

Tributes are very important for us. We use the context of the festival to highlight Cuban and international music greats, such as Benjamin Britten, who was possibly one of the best-known 20th century composers. We also wanted to include two opera greats, Verdi and Wagner, and we’ll be doing that with a concert called Wagner vs. Verdi. We are also going to pay homage to Harold Gramatges, Ernesto Lecuona, Benny Moré, Pablo Milanés, Esther Borja, Bebo Valdés, Luis Carbonell, Bobby Carcassés, Roberto Valera and Calixto Álvarez, the latter a Cuban composer who has been living outside the country for some years. Also, two literature greats: José Martí and Ítalo Calvino, who was born in Cuba, though many don’t know that. All of them will be there, by their presence or memory, in talks, conferences, onstage, or as special guests at our concerts.

The news that Paco de Lucía would be a festival guest 25 years after the last time he performed in Cuba immediately made the headlines, all referring to the great friendship between you. Will you be performing together?

Paco de Lucía will give a two-hour concert with his group, and we are planning a couple of things together, that is part of our surprises. The fact that Paco agreed to come to Cuba and participate in our festival is something we are very proud of, because he transformed flamenco into magic, into transcendent history, and he developed into something contemporary. Paco is a genius. When I think of him, an illustrative story comes to mind. Imagine two men walking very quickly because they need to get somewhere; one walks looking at the floor, afraid of tripping, but he gets there. Very sweaty, but he gets there…. The other, with the same destination, walks looking to the right because he sees a mockingbird and smiles; he keeps walking, sees a row of palm trees and is captivated; he gets there first. That is Paco de Lucía. I think it’s not worthwhile to explain in plain language who he is and what he means for culture. He is an extraordinary man, a man who has transformed and caused the transformation of a century of great music in his country and in his genre.

Foreign investment in Cuba step by step, peso by peso?