It is one of the sectors that since 1968 constitutes a black hole through which a part of the wealth that the people create disappears, for various reasons and towards different destinations. Why does everything remain the same? 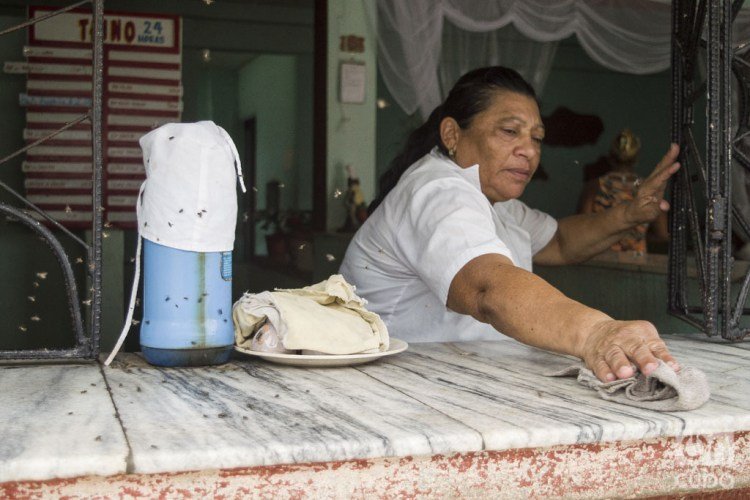 Whoever spends time walking through the blocks that make up 23rd Street, I Street, 25th Street and F Street, will appreciate an interesting phenomenon. On the corner of 25 and G, a private restaurant is almost always full from 8:30 am and during lunch and dinner time it is difficult to get a table. Further down at 23 and G along the lane from Vedado to Marianao, another establishment, perhaps a cooperative, also manages to have clients quite frequently.

But on the corner that makes the diagonal, stands the Castillo de Jagua, a restaurant with a lot of tradition, that received a strong investment from the budget (I don’t know if local, provincial or national). Recently repaired and modernized, its tables remain in a lonely state without customers.

Strange. There, the prices, because of the luck that it belongs to the state, are more within reach of average Cubans’ pockets than in the other two mentioned above. However, its level of occupation is far from that of those others.

The same occurs at the corner of San Lázaro and Infanta. On one side El Vicky with its tables occupied and on the other the old oyster bar with its empty stools. A mystery!

“We do nothing by reviving an establishment if the offers fail to remain in time,” said President Díaz-Canel a few days ago during the annual review meeting of the work of the Ministry of Domestic Trade (MINCIN).

But we already know that commerce and gastronomy are always a great mystery. There are places born with a lucky star and others that no matter how much is done, remain in a state of quasi rigor mortis.

Obviously not everything is luck, neither in the state sector nor in the private sector. The recent history of commerce and gastronomy in Cuba has not been written, but writing it would be worthwhile.

It’s not news that gastronomy and state commerce have been, since 1968, one of the sectors that has given the most headaches to the government and more losses to the national economy.

Neither is it news that this sector, also since the same year, has become a black hole through which a part of the wealth that the people create disappears, for various reasons and towards different destinations.

Note this data provided by the Cuban Statistical Yearbook 2018. In that year 592.8 million pesos were invested in the sectors of commerce and repairs of personal goods and in restaurants and hotels, while 57 million was invested in science, 339.9 in education and 301.2 in public health.

It has also been known for a long time that a part of the management of these state businesses serves private interests that profit from state resources and use the people’s money to finance their operating expenses and obtain individual spurious profits that have nothing to do with the effort made, nor with the quality of service provided, nor with the individual resources invested.

In the MINCIN review meeting mentioned above, Díaz-Canel said that this year there will be no bank credits nor will the state budget cover losses due to theft in commerce and gastronomy.

During these almost 50 years the State has tried again and again to control, amend, rectify, perfect, the “mechanisms” under which the sector operates. But the results obtained in all these different attempts have remained far from the purpose.

The cost of the attempt to control has been as high as the cost of the lack of control and as life has shown in all these years, it has not been really effective.

State commerce and gastronomy are one of those stones you’ve tripped over more than once, but also one of those that we constantly pick up and throw again in front of us.

I advance that I start from the assumption that most of the colleagues who work in state commerce and gastronomy are good people, honest and that they share with us all the vision of the country that we approved some time ago.

I assume that the comrades who today hold high responsibilities in that Ministry of Domestic Trade are identified with the transformation effort that President Díaz-Canel leads; that its current Minister and officials strive to achieve substantial improvements in the sector, and that everyone is prepared to carry out their duties and have sufficient experience and trade; that they have their heart set on Cuba and their mind occupied one hundred percent on the task.

However, the results and the reality of the sector leave much to be desired. I stress that the problem is not only of men and women or officials, nor of new mechanisms. It must be something else.

It is also true that the current difficulties, including the increase in U.S. sanctions, make everything more difficult. But in the 1980s, with all the Soviet help and a much more comfortable budget, neither did state commerce and gastronomy manage to meet the Cuban population’s expectations and demands in terms of quantity and quality.

So―and this would be the scientific question―if all of the above is a reality confirmed and addressed again and again in the different decision-making instances in our country, both in public sessions and in other not-so-public ones, why do they insist on the idea of ​​improving, perfecting, maintaining a state sector in gastronomy and commerce, relatively large, dispersed, atomized, technologically backward, with ineffective and inefficient management and commercial practices that concentrates a great deal of the losses and subsidies that the State, as a representative of the people, has to allot?

I advance some hypotheses:

1 The decision to maintain a high presence of the State in state ownership and management is due to political considerations to maintain the preponderance of the socialist sector in the economy.

It is true, however, that they generate a large amount of employment. According to the Cuban Statistical Yearbook 2018, employment in the commerce sector reached 465,300 persons, as much as in education or as in the health sector, almost ten times the employees in the sugar industry, 100,000 more than those employed in the Cuban industrial sector and 200,000 more than those employed in construction.

Of course, the fact that a part of that employment ceases to be state does not necessarily imply that those jobs are lost, just that they would stop being state employees and would go on to swell the ranks of non-state sector employees, with which the weight of the non-state sector in employment would almost match that of the state business sector.

2 Maintaining ownership and direct state management of the commerce and gastronomy sector makes it possible to obtain resources (tax revenues) that are decisive for the State and that cannot be compensated for with other sources.

Let’s go to the data. Chapter 14 of the Cuban Statistical Yearbook offers very useful information. [1] In 2018, the value of wholesale commercial circulation [2] was 32,186,600 pesos, while the value of the retail commercial circulation [3] was 14,791,100 pesos. Both grew in relation to the previous year (2017) by 1.6% and 8.3%. However, the added data does not distinguish between the system served by MINCIN and the other system served by other enterprises.

For 2019, Cubadebate published that “the commercial circulation (wholesale) of the served business system reached 8.376 million pesos, 99% of the plan, decreasing by 763 million pesos compared to 2018.”

A difficult task to regulate the country’s domestic trade while attending to only a quarter of the wholesale commercial circulation.

Adding the wholesale and retail commercial circulation in the hands of MINCIN we have that the total turnover was 13,324,800 pesos, which is not little money.

Seen from the perspective of the state budget, the budget income [6] for 2018 reached the figure of 85.39 million pesos, of which 35.155 million pesos correspond to retail sales, that is, 41% of all state budget income. This not at all negligible amount always forces us to think if the destabilization of retail trade would not lead to a drastic reduction in budget income, making the country’s fiscal situation tenser.

The question would be: would converting this segment of commerce to private management allow the same amount to be collected via taxes?

At this moment in time, I believe it is impossible to compensate with income taxes the direct income that the State obtains via sales in commerce and gastronomy, or other sectors that allow such income, nor a sufficiently broad tax base that compensates for that income.

This can be a compelling reason to maintain the current sector of commerce and gastronomy at 100% state ownership and management. So, will we have to continue tripping on that same stone for some more time?

[1] All the information offered in the chapter covers national and provincial state entities, including Cuban and joint commercial enterprises that have wholesale and retail trade activities.

[2] It includes the wholesale distribution of food and non-food products carried out by enterprises that have this function as primary or secondary. It also includes distribution to commercial funds (it contains retail trade, public food that includes workers’ dining rooms and accommodation), intermediate consumption, social consumption and other destinations.

[3] Represents the sales of merchandise to the population for personal consumption. The retail merchandise circulation of goods consists of: Sales in retail, sales in public food.

[4] Given the number of points of sale of the other system, the proportion corresponding to the MINCIN system may be smaller.

[5] The second source of budget income, called Other income, calls attention. However, the explanation that appears in the Yearbook does not allow us to get an idea, not even approximate, about its origins. Other income: sum of other income concepts not included in the selected indicators of monetary circulation.

[6] Income: Sum of the selected indicators of monetary circulation that represent the state sector of the economy’s income in its bank accounts, coming from the non-state sector. It includes: commercial circulation, services to the population, taxes and contributions to the Budget, and credit repayments.