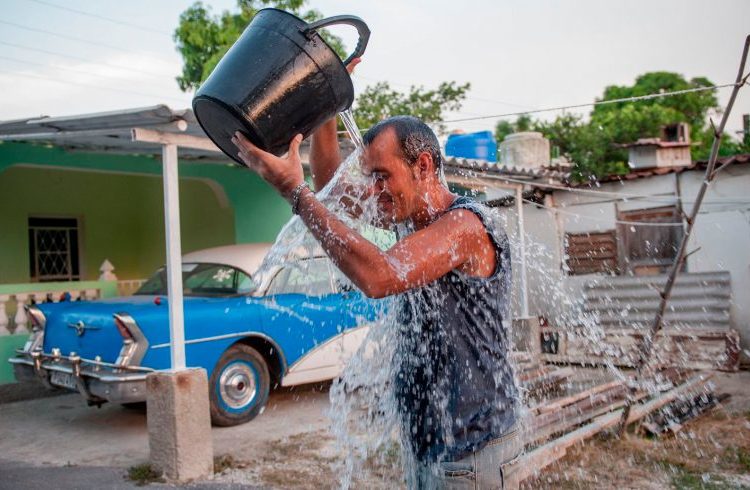 Cuba has no water problems. That affirmation, just like that, in such a categorical way, is by someone some time ago. What called attention is that who affirmed something like this was an educated person, someone who had studied and was a graduate. He said this to me after walking with me one night through the streets of my hometown and seeing the rivers of potable water running through the side of the sidewalks and no one doing anything to avoid it.

It was the same person who once speaking about the food rationing affirmed to me that in Cuba there was more than enough food, after seeing the enormous amounts that were thrown out, as waste (leftovers?) in my workplace’s canteen. He was a European survivor of World War II and those conversations took place many years ago, during the time when we also had “more than enough” oil.

What to me is almost surrealistic is that so many years later the water continues running through the same streets, the canteen continues generating as many leftovers and for some there is still more than enough oil.

I remembered the issue after reading and hearing several weekly news items from the recently concluded week in which it was said there were plans to increase fruit production – and their export! – plus the results of the rice program, and also the tourist development plans.

With water as the background, a character very typical of many of the country’s towns and cities came to my mind: the water carrier, a figure that never disappeared although he has changed. The news also reminded me of the long hours that in each one of the People’s Power Assemblies in each one of the country’s people’s councils have been devoted “to the water problem.”

Well then, let’s talk about water today.[1] The majority of Planet Earth is blue. Of all the existing water, only 3 percent is fresh, the rest is salt water. Out of that 3 percent, converted into 100, 69 percent is frozen, 30 percent is underground and less than 1 percent is superficial fresh water.

The Cubagua 2017 Convention has just come to an end, an event that deserves being held every month and in all the country’s municipalities to see if that way we can expand the culture of rational use and saving among all those who use it, state and private enterprises, non-entrepreneurial institutions in all their extensive range, and logically us, the individuals.

Firstly: how much fresh water is there in our country? Well this, our archipelago, has 38.1 km3 of water. But not all that water constitutes the “supply,” since only a part is usable water. Out of the total figure only some 13.5 km3 of water are available, that is, 35 percent of all the water that exists. Compared to the world, 75 percent of our water is superficial, greatly due to that program promoted by Fidel Castro which allowed for the construction of hundreds of reservoirs throughout the country. If this had not been done our availability of the resource would be as little as that of Haiti.

Egypt and the United Arab Emirates are among the countries with less available water, 26 and 51 m3 per person per year. Those with abundant water are Suriname and Iceland, with 479,000 y 605,000 m3 per person per year. According to a study published four years ago [2] Cuba had 3,361 m3/inhab/year and we were the fourth country with less availability of water in Latin America, only “surpassed” by Haiti, Puerto Rico and the Dominican Republic.

However, the figures published by the Cuban Statistical Yearbook place us in a worse situation than that study, since now there are 1,215.7 m3/inhab/year. If this data is completely correct, we have little, very little water.

The averages, as always, hide the inequalities. That last figure moreover reveals how badly our available water in the country is distributed. The west concentrates the largest availability of water, while the eastern territories are the worse off, despite the fact that perhaps Cuba’s most important aquifer basin, the Toa region, is located there.

Secondly: where does our fresh water come from? Well, it comes from “the top,” but not from our snowcapped peaks, but rather from the precipitations; therefore we are “rain-dependent.” Some 143 km3 rains every year when everything is more or less normal. Of that water that falls from the sky, around 25 percent becomes a hydric resource, that is, potentially usable water, and the rest is lost. Remember our geography, a long and narrow island, in which the water falls near the sea and gets there very rapidly.

Thirdly: where do we use the water? Almost 20 percent is used by the population, although despite several important investments a high percentage of that amount continues being lost due to leaks in the network. If it is 10 percent or 50 percent is almost a secondary issue, the truth is that it is lost; it is unable to meet the need for which it was “produced.” It’s not enough and moreover “we lose it on the way.”

Industry uses around 5.5 percent, how efficiently does it use it? That is difficult to know. For agricultural irrigation 57.9 percent is used even when our country doesn’t have much agricultural land under irrigation. According to some specialists, a considerable amount is also lost due to the technological backwardness in our irrigation systems (irrigation by flooding is almost as old as the agricultural revolution). There remains 17 percent that is used elsewhere, and around a billion cubic meters of water – the entire Zaza reservoir! – are lost every year.

Today, when we are endeavoring to be sustainable, to substitute imports (rice, for example), to achieve exports (fruit), water appears as the common restriction for all of them because we do not have enough, because we do not give it the value it really has and because we waste a great deal of it due to deteriorated systems, old technologies, lack of culture and indolence and because since it is a public good that the State provides at low prices, we who use it are barely aware of the commitment we have of using it rationally.

How much does water cost? The population pays, if they don’t have a water meter, 1 Cuban peso a month per each person in a household independently of how much is consumed. That is obviously not its cost. If the consumption were metered in the majority of the homes and the bill were effectively paid for water consumed, then it is probable that the culture of saving would flourish. Let’s take electricity as an example: today the “click” patrols have been replaced by the price per kilowatt, even when the first 100 kilowatts are subsidized.

If we were to use as proxy what the Cuban State charges foreign enterprises, around 1 dollar per cubic meter (0.1 cent of a dollar per liter) then perhaps we are a bit closer to its cost. Of course, it is clear that the majority of the Cuban people are very far from earning in CUC which is why it is impossible to think of rates with that price as a referent, but paying one peso a month for water independently of the consumption is an invitation to waste. To set the record straight, there are also countries which pay for the water that is returned to the sewer networks.

An interesting concept I learned two years ago is that of virtual water, that is, the total amount of water needed to produce a certain amount of a product. Below I transcribe a table that illustrates that concept. 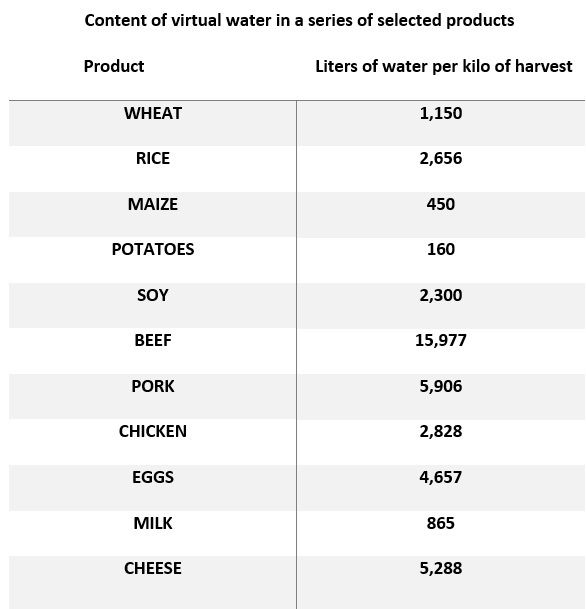 If we were to hope to substitute 100 percent of some of the products we import (wheat, maize, soy, beef, pork, chicken, milk, cheese) we would need 2.289,4 billion cubic meters of water. Neither have we incorporated that other viewpoint of looking from the perspective of the water needed to do something.

It is thus clear that if we were to modernize our irrigation systems, if we were to use technologies to encapsulate the water and favor its absorption by the plants when they need it, we would be saving a lot of water. If our culture and our regulations were to incentivize us to use water more rationally, we would also save a considerable amount.

However, while we are involved in a fight to the death persecuting the almendrones and we use a part of our army of inspectors in that task, or to avoid that someone hoard croquettes, we look on passively as the little water we have is wasted and badly used every day, be it for the residential sector, which consumes the least, or by the business sector. As if we were in a condition to let this go by….

[1] All the data that appear (except if the contrary is specified) and some of the best ideas were taken from a presentation given two years ago by Doctor in Engineering Sciences José A. Díaz-Duque at the Center for Cuban Economy Studies.