Founded by Hugo Cancio, a Cuban-American who lives in Miami, OnCuba celebrates the first five years of its first edition. What began with a magazine about charter flights between Cuba and the United States, and a website with some followers, is today an American communication platform with permanent correspondence in Havana, hundreds of thousands of readers and an unprecedented distribution in the U.S.

As part of the celebrations, it invites to the exhibition 5 years OnCuba at the Gorría Workshop Gallery. 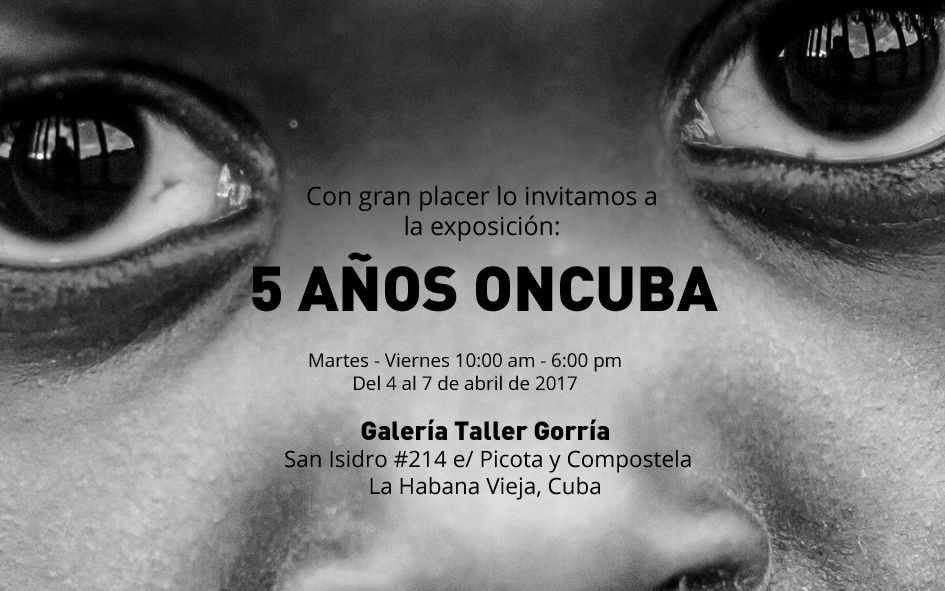 In the eye of the cyclops

The National Council of Plastic Arts and the Fototeca de Cuba invite to the Cyclops project, this Friday, March 31, at 10:30 a.m., at the headquarters of Fototeca. This time it will have the specialist Ossain Raggi as guest, who will make a tour on contemporary Cuban photography, from the 80’s to the present.

House of the musical Alba 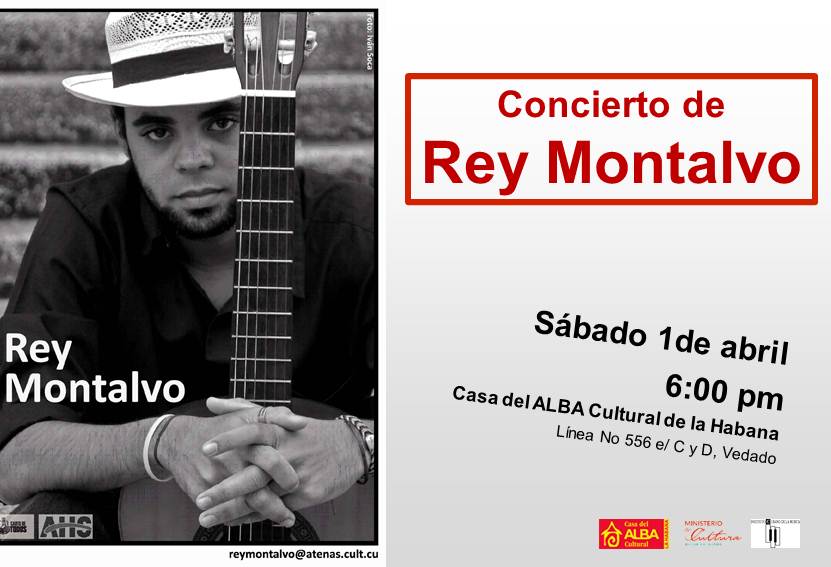 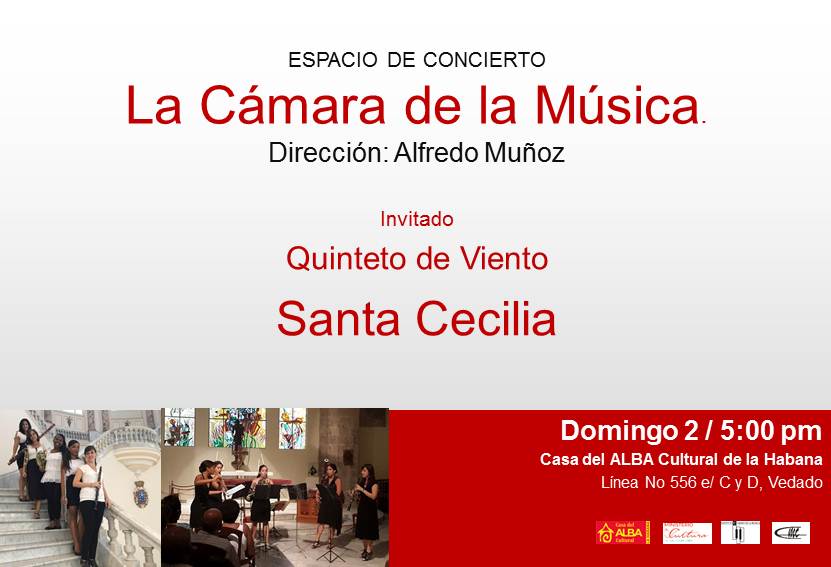 The most alive of the strings … in its gala

The awards ceremony of the Cuerda Viva Festival will be this Saturday, April 1st. at 8:30 pm, in the Avellaneda Hall of the Cuban National Theater.

Born from the television program with the same name, which aired in 2003 with the aim of spreading the talent of young people dedicated to alternative music, the festival has been held since 2005 and it rewards the best exponents of the genre.

On this occasion, and in the context of the program’s first 15 years, the awards ceremony will feature a cast of soloists and groups such as Interactivo, Beatriz Márquez, Suylén Milanés, the rap singer Athanai, Kill the Party, Tendencia, I love you , Tesis de Menta and Qva Libre, et al.

The cast also includes the mezzo-sopranos Dayamí Pérez, Giselle Polanco and Merlyn Cruz, as well as the baritones Alejandro David, Reynaldo Cobas and the tenor Héctor Rodríguez, accompanied by the master Vilma Garriga playing the piano.

The performers will assume some of the main opera arias starred by the American diva, with the direction by Daniel Noriega. The program will have selections of Il Turco in Italia and The Barber of Seville, by Gioachino Rossini; Norma and Puritani, by Vicenzo Bellini; Tosca and La bohème, by Giacomo Puccini; Il Trovatore and La Traviata, by Giuseppe Verdi and other arias by Carmen, Lakmé, and Samson et Dalila, from the French repertoire of the singer.

Electronic music for the tracketeo

Organized by the National Laboratory of Electro-acoustic Music in collaboration with the Hermanos Saíz Association, the grand electronic music concert TRACKETEANDO will take place this Friday from 9:00 p.m. to 2:00 a.m. at the Rosado Hall from La Tropical, with the participation of DJs Ryan, ADroiD, Iván Lejardi and Reitt and the visual concept of the artist Mauricio Abad. 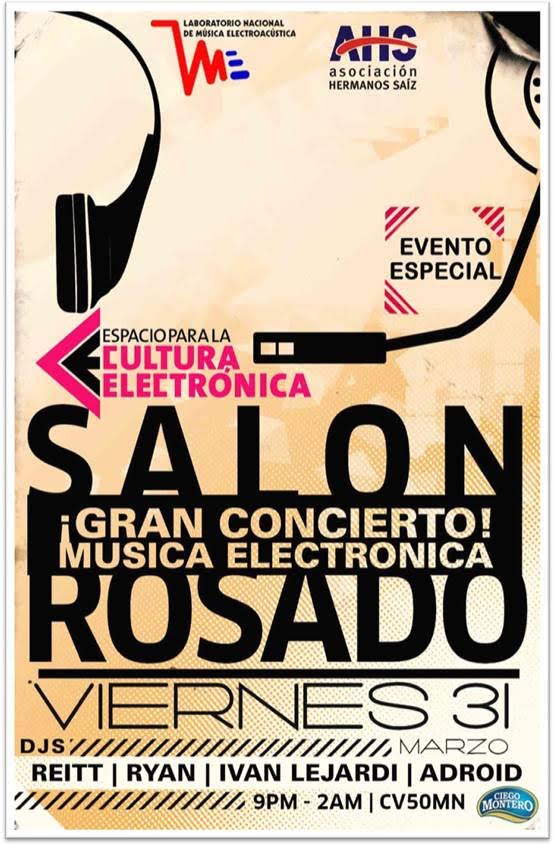 The circus show Fiesta de Maravillas, with the artistic direction by Armando Benítez Rodríguez, will take place on Friday and Saturday, at 8:30 p.m. and Sunday at 11:00 a.m., at the Lázaro Peña Theater.

Patterson on the screen

The premiere of the documentary Arnaldo Patterson The Master will be next Thursday, April 6, at 3:00 p.m., in the Adolfo Llauradó Hall. Arnaldo Patterson, one of the founders of the company organized in 1959 by Ramiro Guerra, performed as a dancer, choreographer and teacher and became one of the most permanent legacies of dancing movement in Cuba. However, his figure has been relegated for many years.

The purpose of the documentary, with the original idea of journalist Mercedes Borges Bartutis, and filming by Pedro Maytín, is bringing back the importance of Patterson’s work. The record shows the testimonies of figures from the Cuban dance and collaborators close to Patterson such as Santiago Alfonso, Isidro Rolando, Luz Maria Collazo, Rosario Cárdenas, Perla Rodríguez, Miguel Iglesias, Regla Salvén, Zarina López, María del Carmen Hernández and Arelis Estévez .

Sponsored by the Cuban National Council of Performing Arts and the research of the Cuban Observatory of Dance, Arnaldo Patterson The Master is the first in a series of researches aimed at rescuing and preserving the memory of protagonists and areas from the Cuban dance.

FAC on the move

As part of the program, the presentation of the piece Ausencias by Marien LLuévano, José Arteaga and Ulises Martínez (Mexico), Samir (France), Andrés de Abreu and Ricardo Rodríguez (Cuba) will take place at 9:00 p.m. At this time, the artists will offer a live version of Resilience, as well as a selection of videos from the festival.

An hour later, the exhibition Fiva. España will take place with the projections of:

Surco Sódico (Sodium furrow) by Laura Cortes / Spain
La ruta natural (The natural route) by Goga Rivero- Irvin Castro / Chile
15 by Martha Arjona / Spain
In contra (In against) by Criss Castillo / Mexico.
Sweet Lizzie Project will be in concert at 11:00 p.m. on Nave 4.

For this Saturday, April 1st. at 9:00 p.m., FAC reserves the presentation of the collection The drama is over, from Clandestina project. The projections of the Video-dance International Festival DVDanza Havana, Movement and City 2017 will continue at 10:00 p.m., and Frank Delgado will perform in concert at 11:00 p.m.

On Sunday, at 9:00 p.m., continues the presentation of The other room by El Público theater, with direction by Carlos Díaz. A young couple lives in “the other room” of a house inhabited by a lady; who these young people try to kill to be left alone and solve the eternal problem of housing and independence. Universal problem recreated with humor and ingenuity by this play of the Polish contemporary dramaturgy.

The presentations of the Video-dance International Festival DVDanza Havana, Movement and City 2017 will continue at 10:00 p.m.

To end the day, the flutist, arranger, composer and director Orlando Valle (Maraca), will perform in concert at 11:00 p.m.

Also on Sunday, at 11:00 a.m., FAC joins the festivities for the anniversary of the José Martí Pioneer Organization carrying out a Street Plan in areas surrounding this cultural project. 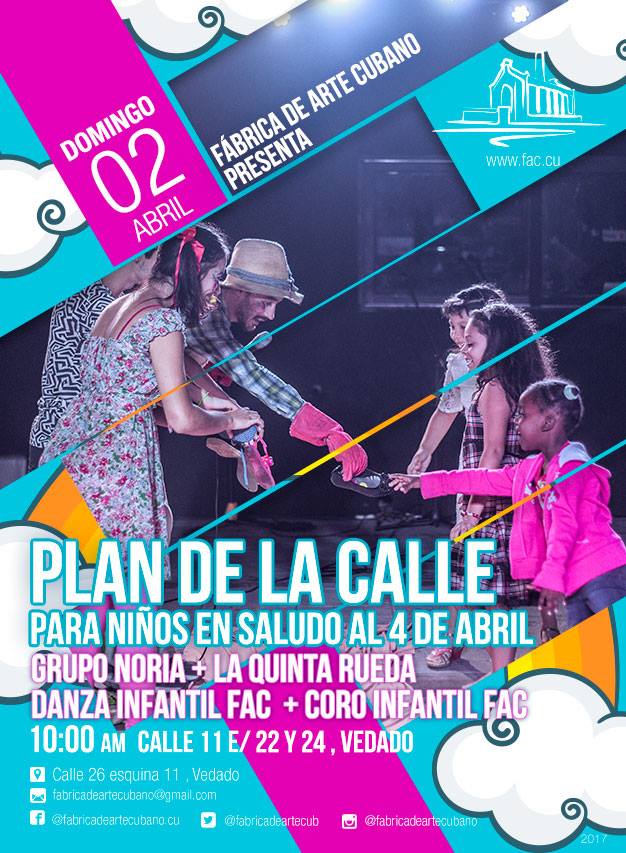 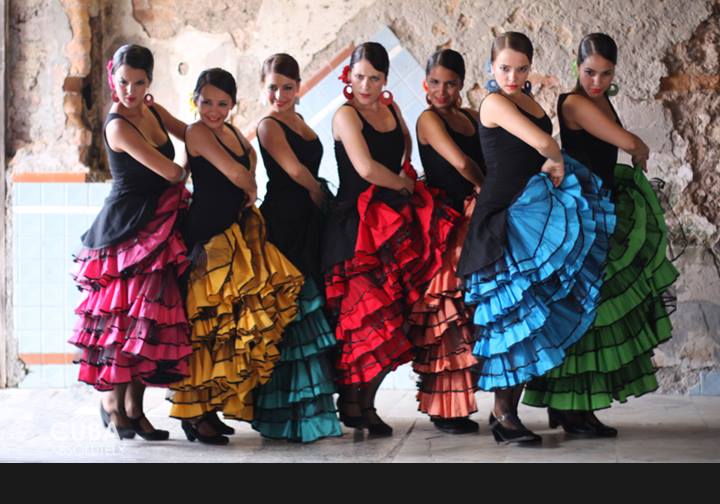 From April 2 to 9, the 27th edition of the Festival “La Huella de España” (Spain’s Footprint) will take place in Havana. The event, presided over by prima ballerina assoluta Alicia Alonso, will have as main venues the Mella Theater, the theater of the National Museum of Fine Arts, the Infanta multi-cinema and the Leonor Pérez Cabrera Canary Association of Cuba.

The guitarist Marcos del Castillo, the timple player Josele del Pino, the poet Eduardo Duque will be among the invited figures, who will share the stage with the Cuban National Ballet, the Irene Rodriguez Company and the Cuban Television Ballet.

Irene Rodríguez, artistic director of the meeting, said that one of the novelties will be the premiere of a choreography created by one of her students from the professional training workshop.

Born in the late 80’s as a cultural project of the former general consul of Spain in Cuba, Juan José Santos Aguado and Alicia Alonso, the festival “La huella de España” has dedicated seven of its editions to the autonomous communities of Valencia, Andalusia, the Canary Islands, Galicia, Asturias, Catalonia and the Balearic Islands, with the presentation of prestigious groups and artists from these regions.

Alejandro Pérez: “When I shoot a video clip I’ve already seen it before”