The reconstruction of Old Havana has been a collective legacy that has had a great protagonist, a teacher, who taught us to think and value what we are. “Andar La Habana” was a university that made us more Havanans and more Cubans. 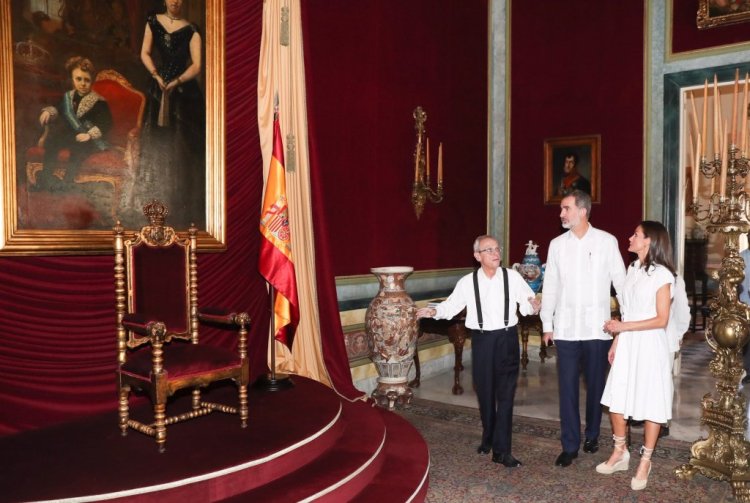 Eusebio Leal shows the king and queen of Spain the untouched throne at the Palace of the Captains General. Photo: EFE

It was 1979. Eusebio Leal was leaning on the southeast wall of the Palace of the Captains General in Old Havana, looking up at the sky. It was a sunny day, there were no signs of rain but Eusebio always looks up as if looking for some kind of inspiration. Never, in all these years, have I spoken to him about this curious detail.

Norma and I were walking through the square when we spotted him. Eusebio was, as his friend García Márquez said, a being who levitated without realizing it because he was not interested. At that time, he was interested in two things: teaching and recovering. And when we met him that’s what we got, a lesson. “Are you students?” Of course. “That’s great….” The phrase stayed in the air and as I was a fan of the “Andar La Habana” (A Walk through Havana) program, I couldn’t think of anything other than asking where those stones he was leaning on came from. We had to ask him something, didn’t we?

What followed was a university lecture. He explained that many came from quarries on the island, others from Spain, some marbles from Europe but, most importantly, that the cutters also crossed the Atlantic. I don’t remember his exact words, but he said something like that it was a monumental work that did not stop at the Palace of the Captains General but encompassed a myriad of other palaces and mansions built in a carefully designed symmetry that ended up establishing an architectural style that determined the future of the city. I also remember that he added that the architects took care of adapting European designs to the characteristics of the country, building high ceilings to cool the environment.

And he added something that would mark his life from that moment on: “Now we have to rebuild all this. It is our task.”

I’m not going to say that it was a premonition, because rebuilding Havana was an old social aspiration, but I remember asking myself how he would do it.

Cuba was at that time engaged in other no less important tasks. Economic development, social welfare, conflicts with the United States and political reorganization. I remember wondering how he would convince the government, with so many other concerns, of the task that had to be undertaken. And he got down to work.

The first was to design the reconstruction plan, then the recovery of facades and the interior, then establish the reconstruction schedule and then came the most difficult part: getting the necessary funds. The country did not have enough, they had to come from outside the country. With an implacable economic embargo, Europe seemed the only viable option. But for this he needed great institutional support. This is where a protagonist, who has been in the shadows, enters and should be remembered: Alfredo Guevara.

Guevara had connections with UNESCO, which he had developed since 1968 and, between them, they came up with the idea of knocking on that door and start lobbying. Difficult efforts but which from the start had the help of two basic pillars of the UN cultural entity, France and Spain. They began by explaining to them the importance of that heritage in the middle of the Caribbean that could stand alongside other cities in the region, that there was no way to accomplish the task without some kind of incentive that would “arouse” more interest. That’s how it was that in silence and with a lot of tact in 1982 they managed to make UNESCO declare Old Havana a World Heritage Site, and the floodgates opened.

Little by little the Cuban capital started receiving funds from European governments, even from some without particular empathy with the government of the island, which made it possible to have what everyone can see now, a greatly renovated Old Havana.

But what struck me most was Eusebio’s enthusiasm. He never gave in to discouragement and he established something of an incalculable value that should be rescued, his “Andar La Habana” television programs.

Each broadcast was a true master class. It was the way in which the population understood the magnitude of the work and its need but also an educational complement for Havanans about the reality that surrounded them. Generations of Cubans learned details of their environment that would have gone unnoticed by many of us. I’m not saying that I’ve seen them all, but I remember one that he did about the sources of Old Havana that I had never heard of and, much less, had I noticed them.

With “Andar La Habana,” a name that invited you to walk and have a firsthand look of the city, every new step I took through Old Havana was no longer the same as the previous one.

I learned a lot with that program, well filmed, written and presented. They were master classes, I repeat. And now, remembering with nostalgia, I realize that with this Eusebio created a whole legion of specialists in restoration and reconstruction, of history lovers.

I begin to understand, Eusebio, how you did it, teacher. Definitely, one shouldn’t abate oneself in the face of difficulties. A lot can be done to some of us but the truth is that with Eusebio a giant was created.