In the first meeting of the new Council of Ministers, led by Marrero, "transcendental issues of the country’s economic and social life that have an impact on national reality" were addressed, according to the official press. 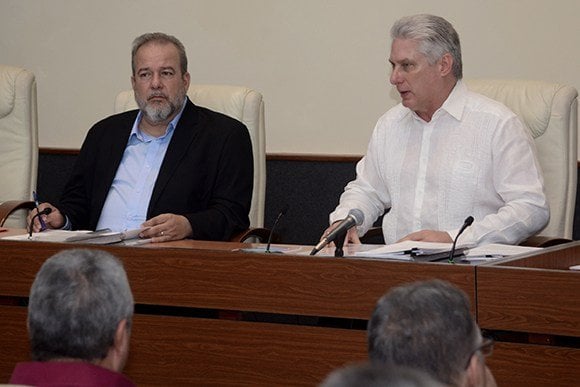 The newly appointed Cuban Prime Minister Manuel Marrero made his debut in his position at the first meeting of the new Council of Ministers held this week at the call of President Miguel Díaz-Canel.

Marrero, as head of the Cuban government as stipulated in the current Magna Carta, “chaired the meeting” and intervened on the different issues discussed, according to the Prensa Latina (PL) news agency’s report on what happened at the meeting, the last of the island’s highest governmental body this year.

According to the official press reports, the Council addressed “transcendental issues of the country’s economic and social life that have an impact on national reality based on which strategic lines are also being defined for the government’s performance in 2020.”

The economy’s situation was one of the main topics discussed, in particular investments. Deputy Prime Minister and Minister of Economy Alejandro Gil said that “the main deficiencies are found in the post-investment studies, especially those related to results obtained after the start-up, which in many cases are very distant from what was initially planned,” a problem that, he said, must be “urgently” resolved.

Díaz-Canel called for carrying out in 2020 “everything that must be implemented to unleash the productive forces,” which, he said, “cannot be confused with privatization, because that is not our way.”

“We are going to remove obstacles to strengthen the state enterprise and carry out the true business resizing the country needs,” said the president, who also urged “maintaining saving measures in everyday practice” as a way of “facing problems differently.”

Minister of Communications Jorge Luis Perdomo explained the updating of the work system and the measures taken for the protection of national cyberspace, a topic described as “strategic” by the newspaper Granma. Meanwhile, Minister of Foreign Trade and Investment Rodrigo Malmierca addressed export possibilities based on local resources, “an aspect where the results achieved to date continue to be insufficient.”

Meanwhile, the new Minister of Labor and Social Security Martha Elena Feitó reported that at the end of 2019, an estimated 4,515,200 Cubans were employed in the economy; of them, more than 3 million in the state sector. These figures represent an increase of 32,500 workers compared to the previous year, breaking the downward trend of recent years.

Comptroller General Gladys Bejerano said that, although progress is shown with respect to previous stages after the control actions carried out, “many acts of indiscipline” are still observed and “there is no culture of control as something useful and necessary in everyday work.”

The Council of Ministers approved different plans and policies presented by the heads of different ministries and state entities, including the inventories policy and the measures for the improvement of the locally subordinated retail trade, the Urban and Territorial Organization plan of the Ariguanabo Special Development Zone, and the State of National Action for the implementation of the New Urban Agenda in Cuba until 2036.

The Council of Ministers also analyzed the results of the 2019 Budget, the state of recovery of the Collection System of agricultural products and their projections, and scientific subjects were presented for the first time in a meeting of this nature, among them the actions carried out in Nanoscience and Nanotechnologies, PL reported.