Reading a well-documented biography and the documents declassified by the three parties to the Missile Crisis, I understood that almost nothing that we believed before had really been the case. 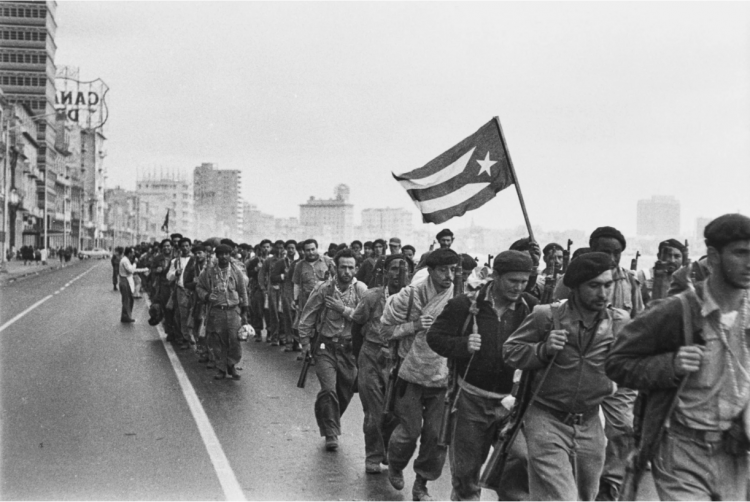 It was in Tad Szulc’s book Fidel, a Critical Portrait — the best biography I’ve ever read about him — that I first read that it wasn’t us, but the Soviets, who proposed installing the missiles in 1962. That view of the Missile Crisis was based on hours of interviews with the only living protagonist of the conflict.

The investigative journalism that Tad embodied has fewer Cuban followers today, in contrast to those who want to be Oriana Fallaci or Tom Wolfe when they grow up. He would manage to record long conversations with actors of the Revolution, from both sides, some almost forgotten, like Universo Sánchez, and others as perennial as Ramiro Valdés. In the house he had rented in the Marina Hemingway, where he once invited me, he told me that Fidel himself had instructed them to answer all his questions. None revealed to him, naturally, what the agreement sealed with the USSR had been.

I read the book in 1987, after the América Latina magazine of the USSR Academy of Sciences dedicated an issue to the 25th anniversary of the Caribbean Crisis — as they called it —, with a text by Sergo Mikoyan, and another by me. In chapter 5, I found out how many errors my Soviet text had, based on public sources. I consoled myself with the thought that authors considered the revealed truth about the Crisis, such as Graham Allison, Robert Divine, David Larson, Elie Abel, had made more mistakes than I had. That new view was consistent with all subsequent declassified documents and research works, especially published since the Moscow Tripartite Conference in January 1989.

Since “the one-eyed man is king,” my misguided article turned me into a specialist on a subject that practically no Cuban researcher, journalist, or academician dealt with. I remember that a Party leader had given me sound advice: “Don’t get involved in that subject, Rafa, because the Chief doesn’t like to talk about it.” What would be my surprise when, almost by accident, I ended up integrating the delegation to the international meeting of veterans and experts on the Crisis, where the third leg of the conflict, that is, Cuba, had been invited for the first time.

I am going to leave for later the intra-history of those pioneering exchanges that led to the Havana Conference on the Missile Crisis, on its 30th anniversary, with the presence of Fidel himself. I am limiting myself here to commenting on some of the things we have learned, since the immersion in the ocean of declassified documents revealed to us the deep subpolitics, its abysses and phosphorescent creatures, as different from what is imagined from the surface. In other words, almost nothing that we believed before had really been the case.

Despite the books published later by Cuban researchers, such as Lieutenant Colonels (r) Tomás Diez and Rubén Jiménez, some local commentators still refer to that moment as “when Cuba was caught in the clash between two elephants during the Cold War.” This peculiar vision of a chapter of our relations with the North only deserves to be commented on because it is repeated ad nauseam, directly or implicitly, every time our quarrels are attributed to that “bad idea” of “choosing the Russians as allies.”

In my history classes with students from here and there, I usually illustrate the Cuban decision on the installation of the missiles through a parable. “A Little One shares the same block with a Big One. Every time he can, the Big One mouths him, shakes him, stuns him with one of those big motorcycles, to scare him and make him lower his head. One day, the Little One is convinced that he is going to be run over with the motorcycle, and he starts looking for someone to sell him a bat. But those with bats don’t want to sell it to him. Finally, he finds a Big One who lives ten blocks away, with bats of all sizes. This one, who doesn’t get along with the Little One’s neighbor, offers him, instead of a bat, a machine gun. The Little One reasons that he does not need a machine gun, because his interest is not to shoot the neighbor, but only to appease him. He also figures out that if he says no to the Big One, who has offered to support him in his fight with the dangerous neighbor, he can continue to be more and more alone than he already is in that neighborhood. In the elementary logic of a quid pro quo, or as the philosopher Adalberto Álvarez would say, of ‘ask for the same thing for you that you ask for me,’ he decides to assume. After all, a machine gun will also appease the neighborhood tough guy, even if he has an arsenal. So he agrees.”

Some imagine the field of politics as a big store where you choose the shoes you like. Neither in the economy, nor in security, nor in public health, nor in meteorology does free choice function as a real premise. However, politics is judged as the territory where free will and personalities prevail. Reason of State is synonymous with malevolent and capricious vision. Speeches and slogans are confused with mirrors of deep politics. And power and its exercise end up being a kind of pathology, whose essence manifests itself in ignorance, arbitrariness, ideological blindness, or simple clumsiness of some officials there. So politics is bad by nature, according to my grandmother, who at least never presented herself as a political analyst.

Unlike other events of the past, this great Cold War event has the advantage that practically everything necessary to judge it has been brought to light by all three parties. So there are not only the testimonies of participants, but also the secret documents, some very revealing. I told my gringo academic friends, Argonauts on that journey, that the 15,000 declassified papers that the National Security Archives boasted about were worth the same as the handful of letters between Khrushchev and Fidel that the Cuban delegation to the tripartite meeting in Moscow had put on the table in 1990.

Not long ago, a Cuban professor, one of the first to study Russian philology, noted confusion in the translations of those burning messages. The Russian ambassador in Havana, a KGB officer who translated for the two leaders, had written attack where Fidel had said invasion. So the phrase “if they do… invade Cuba, that would be the moment to eliminate such a danger forever, in an act of the most legitimate defense,” was read in Moscow as “if they do attack… Cuba, etc.” Khrushchev understood that Fidel was recommending him to launch a nuclear attack against the United States in case it bombed the missile bases. “I was not unaware when I wrote them that the words contained in my letter could be misinterpreted by you and this has happened, perhaps because you did not read them carefully; maybe because of the translation, maybe because I wanted to say too much in too few lines,” the Commander replied.

In any case, the “Armageddon letter,” as it has been fictionalized by some authors, arrived in Moscow after Khrushchev had already proposed to JFK a separate agreement, which bypassed Cuba. So his decision was not due to the fact that such a letter gave him the impression of being emotional or impulsive. Nor because Nikita was a coward or inconsistent, as some Cuban authors have described him. But because in a brawl between two Big Ones, the Little Ones don’t sit down at the negotiating table. History to date would show, however, that this vision of realpolitik or paternalism entails a blundering strategic error since without the cooperation of the Little Ones peace cannot be achieved in most conflicts.

In any case, what Fidel was telling the Soviet Premier was that if they invaded the island, the escalation would be unstoppable. Thirty years later, in Havana, the Russian military high command in charge of the missiles revealed that there were 43,000 USSR troops here. And that although the “strategic” nuclear medium- and intermediate-range missiles could not be used without Moscow’s decision, some “tactical” nuclear missiles were deployed on the coasts, whose discretionary use it was up to the Soviet generals to decide in the theater of operations.

I remember the look on the face of JFK’s ex-Secretary of Defense when he found out about that “unexpected detail”: nuclear missiles that they had never photographed, as well as a bunch of warheads that had managed to reach the island before the air and naval blockade was sealed. At the end of the story, that letter was not wrong about the enormous danger of the United States launching the first blow, even without its highest leaders having proposed it in advance. The moral extracted by McNamara then took the form of a melancholy comment: “there’s nothing like crisis management.”

As is known, the JFK-Khrushchev pact that sealed the biggest Cold War confrontation did not materialize in a treaty, not even in a signed piece of paper, and left many loose ends and inconsistencies. Although Cuba did not participate in the negotiation, it was agreed that it let its territory be inspected by the United States and the UN. Failing that, that the United States would verify the dismantling of the missile bases with aircraft flying low over the national territory. That the Soviets remove “offensive weapons,” not “medium- and intermediate-range missiles.” So the Komar missile boats, MiG 21s, and any other conventional means that could reach U.S. territory fell under what the United States could continue demanding.

The U.S. commitment was limited to not invading with its troops. Nothing about paramilitary actions from U.S. territory, support for armed groups in all provinces, terrorism and other subversive actions, provocations from the Guantánamo naval base, the total multilateral embargo.

Cuba identified with the spirit of avoiding the conflagration that had presided over the agreement, but not with the way it was negotiated, without its presence. Not only because of principles of sovereignty and equity but for having been an inalienable part of the decision to place the missiles, as well as the theater of operations. That is, for being in the front line of combat, running the greatest danger, and running the biggest risk. In spite of everything, however, it cooperated with the departure of the missiles and the Soviet troops; and it was left alone with the enemy, who had never given up trying to put an end to the Revolution.

Over the following 36 months, the gentlemen who had reached the verbal agreement, JFK and Nikita, stormed out of this story. Although the agreed status quo has been respected in practice, however, as part of the ups and downs of U.S. politics, it has been put into question on several occasions.

Nothing in the agreement referred, by the way, to the Soviet troops detached from the missile bases; therefore, more than 2,000 remained, in a unit near Havana, to “do joint exercises,” as part of a conventional military collaboration. Although in the channels of deep politics it was perfectly clear that, in a conflict scenario, the island would not have the Soviet umbrella, the Cuban government insisted on maintaining this group of Soviet soldiers, as a sign of the USSR’s support for Cuba.

All this history has much more than what is believed in order to understand the present.