The general coordinator of the Progressive International, the American David Adler, affirmed that Cuba is an “example that must be replicated” in confronting the infectious disease on the planet and, in particular, in countries of the South, which have a low vaccination coverage. 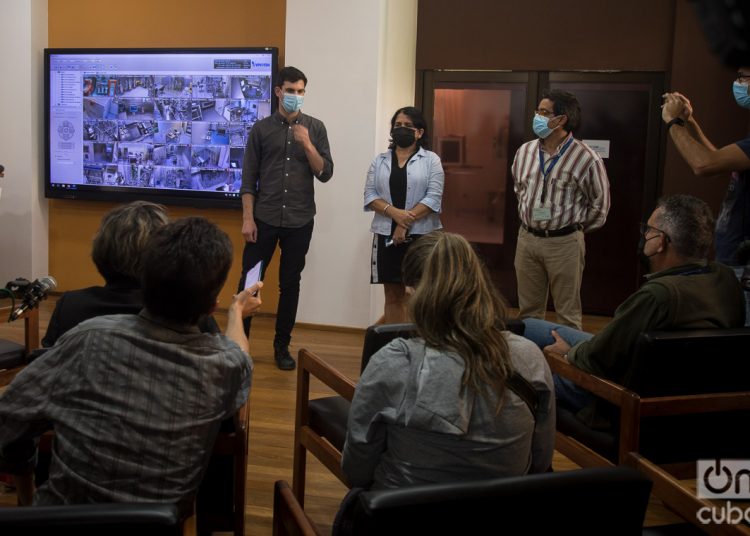 The general coordinator of the Progressive International, the American David Adler (left, standing), and the director of the Center for Genetic Engineering and Biotechnology (CIGB) in Havana, Dr. Marta Ayala (standing, center), during an exchange with the press at the CIGB on Monday, January 24, 2022. Photo: Otmaro Rodríguez.

The Progressive International (PI), an organization that brings together progressive and leftist forces from around the world, confirmed its support for the internationalization of the Cuban COVID-19 vaccines and for the immunization process against the disease developed on the island.

The general coordinator of the PI, the American David Adler, affirmed that Cuba is an “example that must be replicated” in confronting the infectious disease on the planet and, in particular, in countries of the South, which have a low vaccination coverage and are the most affected by the “unfair distribution system” of COVID-19 vaccines and the “lack of solidarity” of industrialized nations.

“Unfortunately we have seen a lack of solidarity and political will to develop a global vaccination plan, by the United States and other rich countries, and in this context, Cuba has emerged as a great inspiration and an example of health internationalism”, Adler told the press during a visit this Monday to the Center for Genetic Engineering and Biotechnology (CIGB) in Havana.

The progressive leader highlighted the scientific development of the island and its public investment in health, and especially the strategy carried out by Cuban specialists to deal with the pandemic. In this regard, he pointed out that the aim of his visit is to “learn how it has been achieved and how we can export that model to the undervaccinated countries of the world.”

Given the current wave of COVID-19, caused by the Omicron variant, and given the insufficient progress of immunization campaigns globally, Adler said that the PI seeks to “strengthen ties of solidarity” and “see how collaboration can be established among the South countries so that Cuba’s innovations and achievements can be applied in other parts of the world.”

“We are here to internationalize the Cuban vaccines, to help them be known and better understand what they are, what their basic data and facts are, their scientific achievements, to overcome that negative propaganda and those falsehoods that exist in international networks and media about their efficacy, and their production, and their proven capacity against COVID-19,” he affirmed in response to a question by OnCuba.

In addition, Adler called for “confronting the U.S. blockade” against the Caribbean country, of which, he said, “political interests” that affect its population, its economy and even its scientific and health system, and regretted the refusal of the Dutch bank ING to transfer donations from his organization to Cuba due to U.S. sanctions.

In his opinion, “the pandemic, instead of being an opportunity to overcome conflicts, has deepened them and propaganda against several countries and their vaccines has been carried out,” among them Cuba, something that the PI seeks to counteract with the Cuban scientists and health authorities themselves.

With this objective, this Tuesday a virtual conference was held from Havana with representatives of the Progressive International and Cuba, in which these issues were addressed. In it, the Cuban authorities thanked PI for its support and reaffirmed that the U.S. embargo “constitutes the main obstacle” to the production and export of immunogens manufactured on the island.

The island, which has a renowned biotechnology industry, has so far produced a group of drugs and three COVID-19 vaccines, and is developing studies of two other vaccine candidates. This has allowed it to develop a broad vaccination campaign, thanks to which 87.6% of the population has already been immunized with the complete scheme, including children over 2 years of age, while more than 4.83 million booster doses have already been administered.