The unpostponable path towards a more democratic system and with greater civil liberties is made difficult thanks to that U.S. policy that gives itself permission to speak on behalf of the same Cuban civil society that it maintains under siege. 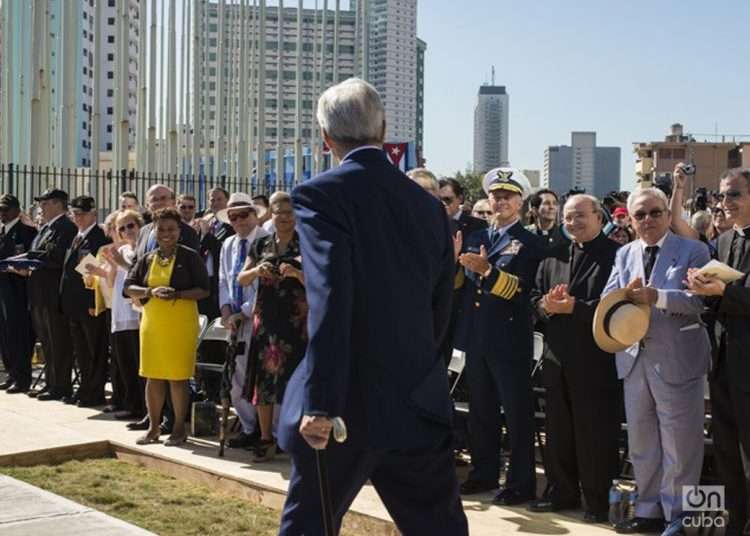 Then Secretary of State John Kerry during the reopening of the U.S. embassy in Cuba in 2015. Obama’s “thaw” ended with the arrival of Donald Trump to the presidency and he who was the vice president during the opening, Joe Biden, has left intact the politics of his Republican predecessor. Photo: Alain L. Gutiérrez.

Among the heap of antinomies that have populated U.S. politics from Jefferson to Trump, probably the most florid of all consists of trying, at the same time, to isolate Cuba externally and influence its domestic processes.

The reason that has always governed it, and also throughout this last half-century, is geopolitical, rather than merely ideological, economic, or domestic. If it responded to ideological or doctrinal factors, the key to this policy could be found in its Cold War anti-communist discourses on human rights and democracy. If it were due to economic interests, it would be dictated by the corporations expropriated in 1959-60, seeking to pressure a Cuban state “reluctant to compensate them.” If Cuba were just “a topic of local Florida politics,” the continuity of the constituents in the Cuban-American enclave, and their antinomies, would explain the United States’ hostility against the island.

Geopolitical logic, on the other hand, bases the application of a recourse of force called a blockade (not embargo) on hot war manuals, aimed at asphyxiating the country, and dragging it by force to a breaking point, according to the jargon from those manuals. At the same time, this logic explains the attempt to interfere in the internal political process, and to push it in the direction of U.S. interests.

Both dimensions of this strategy take shape around the objective of imposing a regime change that suits the United States. Naturally, neither of the two dimensions responds to the plural interest of civil society, democracy or citizen freedom of Cubans, inside or outside the island, nor is it associated with a peaceful change, unless it is a change in that preset direction.

In fact, this combination of siege and internal political erosion has been part of the universal strategic arsenal from Sun Tzu and Attila the Hun to Napoleon and Heinrich Himmler, passing through Clausewitz, skilled in combining the military and ideological excellence of their armies, which we now call penetration, psychological and cultural warfare, in order to soften the enemy inside and out. In its basic format, it was designed and applied against the Cuban Revolution, especially by the JFK administration team. Since then, it became clear that, far from working, it was very counterproductive, as recognized by the members of that team, meeting in Havana three decades later.

In the military field, the forefathers of that so-called New Frontier only stopped before the use of their own troops and means, including the nuclear attack. To save themselves the very high cost of direct intervention, they Cubanized destabilization, taking advantage of the tens of thousands of discontent people, whom they made their allies. Since then, U.S. politicians became obsessed with finding dissidents in the Revolution camp. “Even Castro himself,” reads an egregious memo from McGeorge Bundy, the JFK National Security Advisor, who had hosted Castro when he visited Harvard in 1959.

However, this refined strategy and formidable resources put into play against such a small country, have always suffered from a practical policy deficit: it is very difficult to close all the accesses, doors and windows to a house, and at the same time try to influence what happens inside. Like the wolf of the three little pigs, the U.S. state continued to blow nonstop, while the house became more difficult to knockdown. This has been the quintessential antinomy of U.S. policy towards the island.

Although it is not the only one. Since listing them all would be an abuse, I will comment on only two.

In a previous note, I have pointed out that the anti-Castro and anti-communist condition involves an impossible group. This alliance between the United States and “the Cuban nation” has ranged from the Batista followers and their families (say, the Díaz-Balart) to ex-revolutionaries of all stripes (old militants of the PSP, the Catholic Youth, the 2nd Front, the Directorate, the July 26th Movement, the ORI, the UJC, the PCC….). Also the military of the dictatorship and some insurgents to overthrow it, allied later against the Revolution; members of Brigade 2506 together with former FAR and MININT officers who have become dissidents; to Granma journalists, Marxism-Leninism professors, and many who chanted hymns in the Plaza, together with those who always execrated them, now gathered in the ranks of the Mambisa Vigil and the marches through the streets of Little Havana.

It is not surprising that such an incongruous group reveals a certain ineptitude to act as an opposition bloc, sharing a common platform and leadership. Its slogan could be “against the Revolution everything, within the Revolution, nothing.” Sponsored by different sectors within the established powers — the CIA, the State Department, factions within Congress, politicians in the local anti-Castro industry — the opponents bear the mark of that support. Even leaving aside the epithets that the Cuban media dedicate to them, this brand contradicts its legitimacy as opposition in the eyes of many Cuban people, including those who disagree with or do not support the government.

This peculiar relationship between the state apparatuses and the successive cohorts of anti-Castroism is more convoluted than it seems, and gives rise to a kind of antinomy of Dr. Frankenstein. In the past, believing the diagnoses of that sponsored opposition led it to let itself be embarked in operations as delusional as the Bay of Pigs. Right now, this antinomy is revealed in the most recent statement of the Secretary of State himself on Cuba, with phrases culled from anti-government media inside and outside the island, and from its most combative organic intellectuals.

This discourse attributes the origin of the sit-in in front of the Ministry of Culture a year ago, and the dialogue with its representatives on the night of N27, to the anti-government political activism initiative of some artists installed in Old Havana. It identifies this elite, mostly white middle class, as “the voice of the Cuban people.” It summons the government for “redoubling its bankrupt ideology and failed economic system.” “It congratulates the Cuban people for continuing to demand that the government listen to them.” And “it urges the regime to heed its call, and allow it to carve out its own future, free from the threat of government repression.” It calls all of the above “supporting dialogue in Cuba.”

Not a word about restarting the granting of visas to the Cuban people; facilitating remittances from their relatives; resuming exchanges with artists, academics, athletes; encouraging scientific cooperation in the field of health and the fight against the pandemic; allowing Cuban Americans to invest and associate with their relatives on the island; recognizing the reforms aimed at opening space to the private sector, the market, the use of the internet, etc. Not the slightest hint of an announcement about the relaxation of the blockade mechanisms for the benefit of civil society on both sides of the Straits of Florida.

The last antinomy of this policy that I will comment on is the one that manifests itself in its counterproductive effect.

As much as the Cuban government mentions it to explain everything, the siege of the island is not a Castro paranoia, but a real geopolitical siege. To appreciate its meticulous scope, it is enough to observe a Chinese bank refusing to open an account for a Cuban or read the message “you are in a country where you cannot access this service” sent by Google or Yahoo to a laptop on the island.

The syndrome of the besieged fortress interferes in a thousand ways in daily life, and it is a red light that flashes before each proposed change to be implemented in Cuba. “How will they (the Americans) take advantage of this change, to try to pull the rug out from under our feet?” There is no better vitamin than this incessant harassment for the group of those who do not want to change anything in Cuba.

The Cuban Armed Forces and State Security were founded and grew from the origin of revolutionary power, and have been perpetuated in their current form because they respond to harassment from the United States. Their cost and their role in the system, as well as the centralization and verticalism that characterize the functioning of Cuban socialism, are inseparable from this challenge. Perhaps the most scandalous antinomy of U.S. policy towards Cuba today lies precisely in continually reproducing the conditions that operate against a more democratic socialism and the conquest of greater social and individual freedoms.

To put it another way, without leaving room for misunderstandings: the unpostponable path towards a more democratic system and with greater civil liberties is made difficult thanks to that U.S. policy, which gives itself permission to speak on behalf of Cuban civil society itself. which it keeps under siege. Its official support for the anti-government opposition recharges the atmosphere against the recognition and normalization of a loyal opposition, which contributes to expressing true diversity and plurality within a renewed Cuban socialism.

How do these antinomies work in the current political context of bilateral relations?

After the short summer of normalization with Obama and the four fateful years with Trump, the prolongation of Trumpism under Biden is what was missing to dispel the illusions of a re-normalization within this new Cuban government, which is heading towards the closing of a very difficult third year in office. Even if many of the agreements and mutual trust measures achieved with Obama continue to exist formally, the awkwardness and disinterest of this administration has kept the tone of relations as low as ever. It would not be realistic (or “pragmatic,” as some say) for this young Cuban government to invest a penny in promoting a tango that the other does not want to dance. In terms of cost-benefit, it is clear that Cuba would not win in this scenario what it could have, if Biden had kept his campaign promises. However, for the U.S. interest in relation to the island, the cost of opportunity could be higher than what some political observers seem to warn.

Indeed, Cuba is not an asteroid gravitating alone in front of a massive planet called the United States, in the middle of nowhere. This space is inhabited by numerous bodies. The void that the U.S. ceases to fill in the environment of the Cuban transition is assumed by others. They are not only Russia, China, Vietnam, but the European Union and Canada, with economic and political interests in this transition, as well as a considerable number of countries in Latin America and the Caribbean, Asia and the Middle East, whose political orbit has not drifted away from Cuba, despite the omens of derailment that flooded 2021.

Paradoxically, when we look back in time, perhaps we can appreciate this dramatic year as a turning point, where the continuity and rhythm of changes began to stabilize, despite the antinomies of the U.S. policy towards the Island.