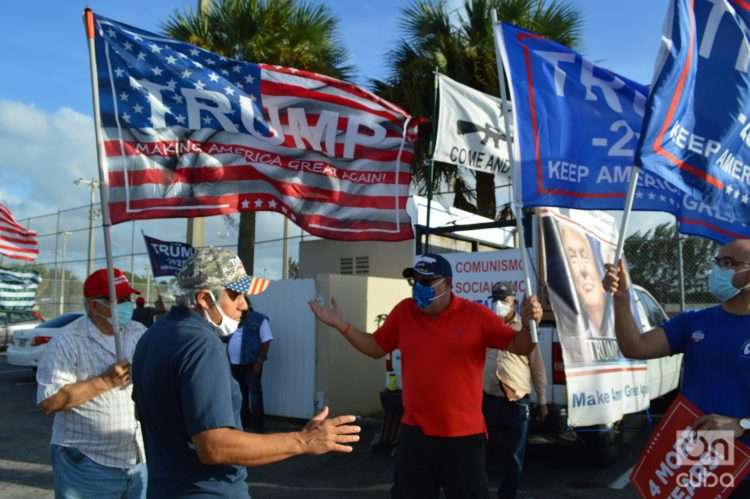 “Back to the Future”

Cuban Voters in An Era of Discontent: What to expect in November.

The literature on Cuban American political participation highlights their political engagement. Cubans become Cuban Americans usually as soon as they have met residency requirements and become Cuban-American voters immediately thereafter. And when they register, they, vote. Massively.

This was not the case before the late 1970s. There was ambivalence in the population about becoming involved in the political dynamics of this country since most still held out hope for slicing up the “next lechonsito de Navidades” in their homeland.  Time and the national strategy of the Republican Party to register Latinos and other minorities in predominantly blue states, as well as the focused efforts of the Cuban American National Foundation to integrate Cubans into the U.S. political system, bore fruit in the 1980s. President Reagan’s attack on the Evil Empire and his recruitment of Cuban Americans as allies in the hemispheric fit against revolutionary change sealed the deal with Cuban Americans and the Republican Party became the party du jour for the majority of the community.  On their part, the Republicans talked the talk and walked the walk. They invested in Cuban American candidates, identifying good leadership, training them and supporting their campaigns. The Democratic Party has been playing catch-up ever since.

The political engagement of our sample lives up to expectations. Only the wave of migrants who arrived during the past seven years, many of whom have not been in the country the necessary time to become citizens, lags behind in naturalization activity. (Figure 1).

The Republican Party remains the party of choice for most Cuban Americans although the percentage of registered Republicans has remained fairly steady since the Obama presidency put a dent in Republican registration. (Figure 2).

The GOP remains well represented among all cohorts. The newest arrivals are signing up as well.  The Democratic Party puts up anemic numbers across the board except for Cuban Americans born outside the island. (Figure 3).

As Figure 2 shows, the Democratic Party has made little headway into the Cuban-American over the last few years, but the No-Party-Affiliation category continues to attract close to a third of Cuban-American registered voters. And as Figure 4 shows, most Cuban Americans, registered or not, feel closer to the Republican Party

Perhaps the most important measure of political engagement is the likelihood of registered voters to actually vote in the upcoming elections. Eighty five percent of registered voters are committed to casting a ballot in November with another 11% reporting that they will “probably” vote in the upcoming elections. Republicans are somewhat more motivated than Democrats or independents. The young voters are, as usual, the most ambivalent but this is a relative assessment since 80% percent express certainty about casting their ballot and an additional 16% see it as a probability. (Figure 5).

If the election for Governor were held today with Ron De Santis and Charlie Crist as candidates, who would you vote for?

The betting lines drawn up in Vegas and elsewhere see Governor Ron DeSantis as an overwhelming favorite to win reelection. He is a “sure bet.” From 91% to 99.9% certainty of reelection with a 1/10 betting ratio in most scenarios. This is not a hard calculation to make given that Florida now has 5.2 million more registered Republicans than Democrats. Still, analysts will look closely at the “Cuban vote” and weigh its importance in the election since most Cubans live in Miami-Dade County, a county that is very close to breaking decades of voting tradition by transforming into a “purple” county. This apparent transition is being energized by Cuban Americans and other Latino voters.

Our poll completed its interviewing in mid-September. While the numbers might change, we can go out on a limb and call the Cuban American vote for Ron DeSantis. Anywhere from 64% to 70% of Cuban Americans will cast their vote for Governor DeSantis. There will be a small number of deserters from the Democratic ranks but Cuban-American registered as Democrats will back the Democratic candidacy of Charlie Crist (assuming that the Nikkie Fried supporters don’t hold a grudge). The Democrats will also do well among the Cuban Americans not born on the island, and among the youngest voters. But even the newest arrivals, which consistently expressed moderate views on the issues raised in our poll, are strongly behind DeSantis to the degree that the cohort is divided between the DeSantis supporters and the “undecided.” No respondent in the newest cohort expressed a desire to vote for a Democrat. (Figure 6).

Since much of the interviewing occurred before the party primaries held in August, the projected voting behavior of Cuban American voters in the congressional races is difficult to estimate. In tallying the preferences of our respondents, it is clear from Figure 36, however, that the majority of Cuban-American voters are planning to vote for the Republican candidate on the ballot. This chart combines the voting commitments of the respondents along the three congressional races (Districts 26, 27 and 28). The large number of undecided voters hold some ephemeral hope for the Democratic candidate but committed Democratic voters are in a minority. (Figure 7).

If the election for State Senator were held today with Val Demmings and Marco Rubio as candidates, who would you vote for?

The race for the senate seat currently held by Senator Marco Rubio is clearer, as evident by the small number of “undecided” voters. The two contenders are well known political figures who have garnered attention for many months.  Sixty-four percent of the Cuban American voters report a clear preference for Senator Rubio. The number of undecided voters (10%) is fairly small, given that all interviewers recorded their preferences two to three months before the election. Within the voter categories, however, we do see some variance from the general community pattern.

If we combine the number of respondents expressing support for Congresswoman Demings with the general support for “the Democrat” in the race, we can estimate the resistance to Senator Rubio’s incumbency. The strongest support Rep. Demings comes from the youngest voters (27%), the non-Cuba born (39%) and, of course, the registered Democrats (72%).  While no one is going to count the votes until all of Florida sings, it is clear that most Cuban American voters are currently chanting his name. (Figure 9).

Looking Ahead to the 2024 Presidential race

Which Republican would you like to see on the ballot?

When asked which Republican they would like to see on the ballot for President in 2024, it is clear that the Trump-train is still picking up passengers down 8th Street. Thirty-seven percent of respondents would like to see ex-President Trump back on the ballot. Twenty-one percent want to recruit DeSantis.  An impressive 59% of registered Republicans support Trump as do 25% of Independents (No Party Affiliation). Governor DeSantis is a solid second in all cohorts. In fact, he approaches Trump in popularity among the youngest voters and surpasses him among the non-Cuba born respondents. Among the Democrats, he is in a tie with Mike Pence as the preferred candidate.  The large number of “DK” responses indicates the uncertainty of the electoral landscape. (Figure 10).

When asked what Democratic candidate they would like to see on the ballot for President in 2024, Cuban Americans present a veritable kaleidoscope of possibilities. Ten-percent of the entire sample express a preference for President Biden. He attracts 18% of 60–75-year-old respondents, 12% of voters born outside of Cuba, 13% of pre-1995 migrants and 17% of Democrats. The segmentation among Cuban-American Democrats might reflect the fragmentation within the party. Barack Obama ties (statistically) with President Biden as a preferred candidate among Democrats. The fine print of the constitution a.k.a. the Twenty-Second Amendment, makes the drafting of Obama to be candidate an impossibility. Non-Cuba born voters share this “enthusiasm” for President Obama. (Figure 11).

A Sidebar on a new “news” source: How much do “influencers” influence?

In recent years, the international phenomenon of “influencers” has become an evident socio-political force within the Cuban and Cuban-American virtual landscape. Using platforms such as Youtube, Instagram, and Tiktok, the voices of these young, tech savvy entertainers often carry political messages to their increasing audiences. We asked our respondents where they receive their information about Cuba. Approximately 37% of the entire sample mentioned that they received their information from the social media sources.  A clear generational and migration wave differentiation is evident in Figure 12. While only 4% of the oldest respondents report receiving information about Cuba from social media sources, 54% of the youngest respondents do so. Forty-seven percent of the most recent arrivals tune into social media sources for their information on Cuba as do those that have not yet become citizens (46%). (Figure 12).

We asked those who reported receiving information from social media sources if they received information on Cuba from any specific internet personality. Several influencers were mentioned (Otaola, Los Pichy Boys, Ultrack, others). We then asked how much influence these sources had on their political thinking. Figure 13 shows combines all of the responses on social media use by the amount of influence exerted specific personalities.  Approximately 19% of the entire population (not just the social media audience) report that “influencers” do indeed influence their political attitudes to some degree.  The significance of social media personalities in the political sphere increases among the youngest respondents and the two waves of most recent arrivals. A fourth of these three cohorts report being influenced politically by social media influencers. (Figure 13).

So we see a community strongly influence by and loyal to the Republican Party. Up next: how did we get here and can changes occur in the political profile of Cuban Americans.