It is likely that a woman will die in Cuba as a result of aggression 72 hours before this text has been published. 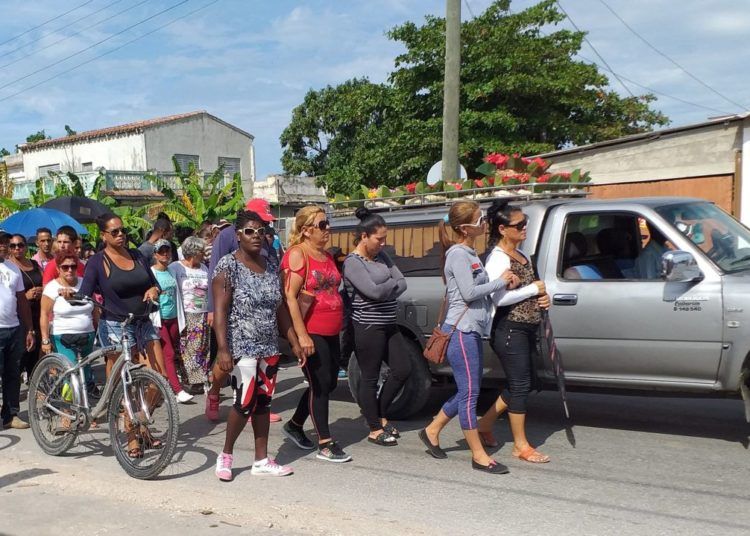 Photo taken in Caibarién, during the burial of the child Carlos Duviel, murdered by his father. Photo: Pedro Manuel González Reinoso/Cubanet.

The last few weeks have brought to the forefront of Cuban public opinion two acts of extreme violence: the murders of a young woman and a ten-year-old boy. Both events, independent of each other, occurred in the province of Villa Clara.

The child was murdered by his father, who has a record of violence against the child’s mother (including physical assault and attempted murder) and he had assured her that she would not see her son alive again.

The name of Leydi Laura García Lugo lengthens a list of women with the same fate. In 2018, official media followed the killing of Leidy Maura Pacheco Mur, in Cienfuegos. For the first time official coverage was given to the murder (after kidnapping and rape) of a woman. The fact shocked the province and the country.

Alternative means of communication and citizens’ denunciations have been registered in other cases: Misleydis González García (Ciego de Ávila, 2018); Daylín Najarro Causse and Tomasa Causse Fabat (Cienfuegos, 2018); Delia Hecheverría Blanc (Santiago de Cuba, 2017, whose daughter was also assaulted and hospitalized); a 18-year-old woman in the municipality of Florida (Camagüey, 2017), another one in San Miguel del Padrón (Havana, 2018); and still another in Regla (Havana, 2018). Only in Cárdenas (municipality of Matanzas), four women were murdered in 2018, and in 2017 another was reported: Taimara Gómez Macías.

We don’t know more about these records. We don’t know what kind of “aggressions” led to their death or if those who attacked them were acquaintances, as is usual according to the analysis of other contexts. Neither do we know the circumstances in which the murders took place, or whether there is more prevalence in racialized women, young people, from urban or rural areas, from impoverished territories, or if none of that matters. There is no data regarding that.

But there are things we do know. We know that, in all the concrete cases that I mentioned before (except for Leydi Laura, about whom we still don’t have information), the murderers were men. We know that part of these men were known by the victims (including partners or ex-partners) and that in several of the cases there was sexual abuse and/or violence. We can say, with certainty, that all the direct facts I mentioned, including the murder of the minor in Villa Clara, were the result of gender-based violence. And that means something specific, which is not trivial if we want to understand why it happens, how it happens, and how to deal with it.

Gender-based violence is any harmful act, incurred against the will of a person, that is based on his/her gender-relationship. It is not about any type of violence, but of that which is exercised against someone because of who he/she is, referring to their gender/sex. Victims of gender-based violence are women (in all their diversity of sexual orientations and identities).

The above does not mean that men are not subjected to violence, what it means is that they are not victims of gender-based violence. The violence exerted against men is not gender-based because it doesn’t respond to a structure of social power where men, as such, occupy subordinate positions.

Gender-based violence is based on the state of inequality that make women inferior beings and that determine that more men than women are part of the labor market, that women have lower wages and incomes, are more overloaded with care-giving work and have less autonomy, and they are more victims of sexual assault, are more likely to enter and remain in poverty and have more difficulties getting out of crises, for example. The above is not a hypothesis. It is confirmed.

But gender-based violence is not only verified with death; it also exists in the form of patrimonial, physical, sexual, psychological violence, etcetera.

According to UN women, 35 percent of women around the world have suffered, at some point in their lives, physical and/or sexual violence by a partner or sexual violence by someone other than their partner. Many national studies give even higher figures. The data are strong enough to declare that gender-based violence is a political, social, economic and public health problem.

Usually, those who murder in a gesture of gender-based violence have a record of mistreatment of women. In the cases I mentioned earlier, all the murderers had that record, including the father of the minor in Villa Clara. Murder is, most of the time, the last link in a long chain of abuse and violence against the victim and/or other women.

International organizations and feminist voices have advocated calling feminicide those crimes perpetrated against a woman as a result of gender-based violence. It is a specific type of crime and its reasons are structural: femicides are possible because tolerance is embedded at the core of our societies, and sometimes authorized, to hurt ―till death but also way before― women.

Those who demand the need to talk about femicides, do so to make it clear that the reasons are not individual and that the facts can’t be explained as “crimes of passion.” The reasons for feminicide must be sought in the structure of social power and in the relations of violence towards women, girls, transgender or sexually diverse persons. Femicides, and all gender-based violence, are a public, political issue that requires the attention of the state and social organizations.

Since 2005, more and more countries have started recognizing feminicide as a particular and more serious crime. The international community recognized it in 2013, at the session of the United Nations Commission on the Status of Women.

Ever since the Federation of Cuban Women created the first Women and Family House in 1990, violence against women has started being treated as a public issue. Initially, only domestic violence was considered. Then, different organizations have addressed the issue in a broader way, considering other expressions, for example, sexual violence and street harassment. There is much less talk, so far, of patrimonial violence, institutional violence or in places of work and study.

According to a national study, 39.6 percent of the women surveyed in Cuba said they had suffered some type of violence from their partner at “some time in their life.” The number could increase, greatly, if violence outside the couple were included in the question.

In 1999, within the framework of a reform of the Penal Code, being a spouse or having a certain degree of kinship between the victim and the aggressor was defined as an aggravating factor in crimes against life and bodily integrity and against the normal development of sexual relations, the family and childhood.

However, neither that instrument nor the Family Code specifically criminalize gender-based violence.

The rape of a woman, then, theoretically could almost carry the same sentence as stealing a television or slaughtering a head of cattle without authorization.

In the near future, both legal instruments should change radically regarding this issue, taking into account the new constitutional text. Article 43 of the new Magna Carta establishes that the State will protect women against gender-based violence. Many people require that that precept be confirmed in law as soon as possible. Cuba already needs a law against gender-based violence.

Public data on this subject is extremely precarious. We know that 963 rapes were reported in 1998, plus 5,791 cases of injuries to women, 577 lascivious insults and 22 sexual abuses. But that was more than 20 years ago. We don’t know what has happened in 2018 and we need to know; not to sow terror, encourage media sensationalism or re-victimize people. We need to know it to boost, demand, create more effective collective strategies. We can say out loud that the ones that exist are not enough.

Cuban legal instruments also don’t recognize feminicide as a specific crime. However, the cases mentioned above, and probably also that of Leydi Laura García Lugo, are that. As long as it is not recognized that there are femicides and that there is structural violence against women, little progress can be made in identifying the specific causes, deactivating them and raising social awareness on the issue.

Cuban society needs to know and understand that these are not isolated cases and that the problem was not that Leydi Laura was alone, that Leidy Maura was on a road, that two of Cardenas’ women were lesbians, or that Delia’s daughter had broken up with her boyfriend (who killed her).

The ultimate reason for their deaths is not the murderers’ “passion” or “unconsciousness,” although the pain of the families and the indignation of a people need to be embodied in a specific subject on which, without a doubt, the weight of a fair law must fall.

It is imperative that Cuban society and law call these femicides by their name, and know that they are not independent of the gender inequalities that exist in the country even though we have parity in parliament; of the impunity of street harassment; of sexism embedded in our cultural consumption and our media; of insufficient sexual education with a gender outlook or of the absence of debate on all types of gender-based violence, which are many and are made invisible.

Cuban society can and should debate a law against gender-based violence, on the need for protocols in schools, universities and workplaces, on the importance of including these topics in school curricula, on the relevance of creating social policies that accompany public policies, on the urgent need of expanding training of legal operators, officials, leaders and managers, police and the whole of society on gender issues, and firm procedures for the protection of victims (which prevent, for example, that the father of the child in Villa Clara could take him out of school after being a recognized aggressor).

It is not possible to ignore the above if you want to do something about it. Ignorance is lack of knowledge. But to ignore something knowingly or out of laziness is to be an accomplice. It’s not killing, but it’s letting die, which is another way of killing.