Shared information indicates that they are being held in El Adde, in the region of Gedow, Somalia. 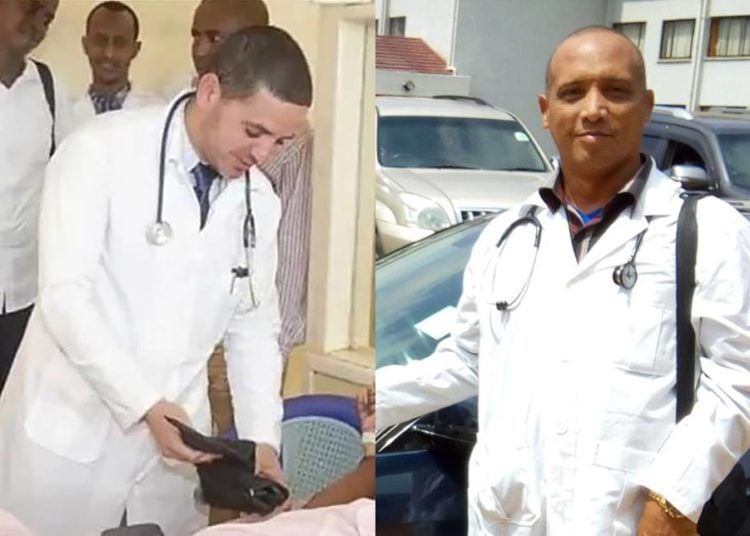 The search for the two Cuban doctors kidnapped in Mandera on Friday by alleged members of Al-Shabab entered the third day with little progress, estimated the local Daily Nation newspaper.

Military helicopters were flying over Mandera (Kenya) and parts of Bulahawa (Somalia) on Sunday morning, “but there was silence the rest of the day.”

However, a police source told the newspaper that the shared information indicated that the doctors were being held in El Adde, in the region of Gedow, Somalia.

On Sunday night, the government of Mandera county, headed by Gov. Ali Roba, met with a national government team headed by the commissioner of the northeastern region, Mohamed Birik.

A source at the meeting confirmed to the Daily Nation that coordination has been completed to send elders to Somalia to help in the negotiation. According to the daily The Star, a representation of the elders already would have gone to Somalia for this purpose on Friday, April 12.

“The team will go to Somalia on Monday to try to negotiate the release of the doctors,” the source said.

According to The Star, Governor Ali Roba wondered how the alleged members of Al-Shabab managed to kidnap doctors despite the strong presence of security forces in the city. Mandera also has around 100 Kenya Defense Forces (KDF) soldiers.

“Honestly, how is it possible that we have more than 100 security forces in a small city like this one? However, such an incident can occur in broad daylight. These are the questions we must ask ourselves. It seems strange to me,” said Roba.

Meanwhile, the police have continued to investigate cars in Mandera.

“We have at least 28 vehicles, mostly Toyota Probox (the make of the two that obstructed the passage of the van in which the doctors were traveling), which operate in Mandera as taxis. We are trying to verify their registration,” said the county police commander, Jeremiah ole Kosiom.

Kosiom explained that they will hold the vehicles until the National Transport and Security Authority (NTSA) confirms who their owners are.

He added that several locals had been arrested during a raid that began on Saturday morning, some 24 hours after the kidnapping of doctors Landy Rodríguez and Assel Herrera.

Since Friday, the crossing on both sides of the border between Kenya and Somalia has been interrupted.

Use all possible means

Muslim authorities in Garissa, Kenya (where Cuban doctors also work), have called on the government to use all possible means to rescue the two Cuban doctors, The Star reported.

They urged “those involved in the cowardly criminal act to unconditionally release the doctors.”

Garissa Supkem’s president, Abdullahi Salat, said the kidnapping was anti-Islamic and unacceptable. He called on the Somali community to work closely with their government and Kenyan security personnel to ensure that the doctors are rescued.

“We want to strongly condemn this incident that only served to taint the image of our region once again when we all know that Mandera was recovering slowly but steadily from insecurity. They took four steps forward and now six steps backward,” said Salat.

He said the doctors were serving passionately after most of the Kenyan doctors working in the northeast had fled insecurity.

Salat added that the incident had not only damaged the religion of Islam and the Somali community, but also that of the people of the northeast.

Sheikh Hussein Mahat said the incident should draw the attention of security agents to stay alert.

“These criminals are always among us and only wait for an opportune moment to attack. Safety is our responsibility, it begins with me and with you,” said Mahat.

Mandera has not suffered terrorist attacks for the past three years, but the slowly recovering trade may run the risk of an interruption after this incident.