One thing is each one’s respectable opinion and another, quite different, is to understand the nature of these relations. 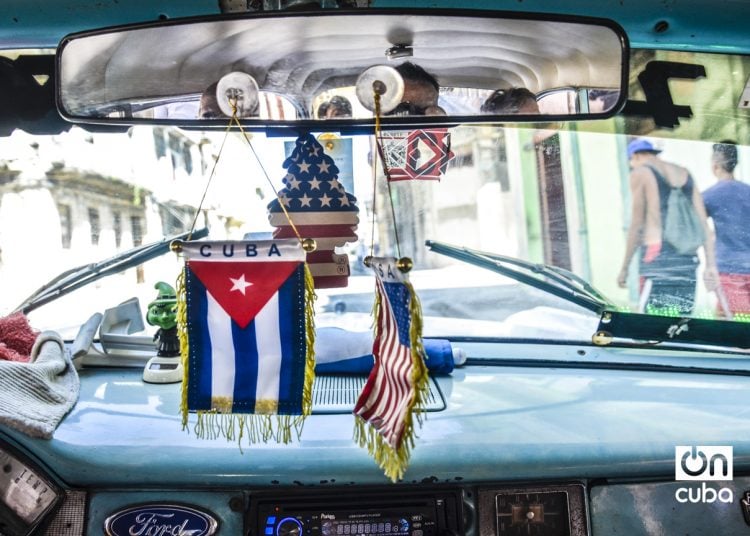 Cubans can confess ignorance in epidemiology or meteorology, but not about Cuba-United States relations. Perhaps nothing brings them so together on the same side―including those who don’t agree with the system―as that historical tension between a North that has sought to prevail at all costs, and a country determined not to let itself be dominated, at all costs.

If that were a trait of thinking as a country, surely it would be necessary to feel proud of a civic conscience. After all, as a history teacher friend says, “we are political animals” who have no choice but to opine on “a matter that concerns us.”

Here comes the basic idea (or the “theoretical framework,” as they used to say in the past at the University of Havana) of this conversation: one thing is each one’s respectable opinion and another, quite different, is to understand the nature of these relations.

Let’s assume that it is a couple in marital conflict. Those who care, are interested in and think about them don’t have to understand what is happening to them; opining hardly expresses “knowing,” for example, which of them “is right.” But the conflict itself, as Carl C. Jung would explain to us, is more than that. It isn’t as simple as among other beings in the natural world, say, the wolf and the sheep or the shark and the squid. Nothing compares to a conflict between human beings, especially if they live under the same roof, or almost.

Slipping by that same condition of human beings, some consider that Cuba’s relations with the United States are one of hate/love. Surely they refer to the many tastes Cubans share with American society and culture: baseball, jazz and rock, rumba and salsa, movies, swing, household gadgets, cars, etc. When comparing Cubans with other Latin Americans, probably an impartial third eye would find us closer to the gringos (pejorative Mexicanism), whom Cuban speech calls (affectionately) yumas (for that western, with Glenn Ford).

So how can you fight to the death with such yumas? The conflict, naturally, is not with the Americans, nor is it hate/love or Eros and Thanatos, as Jung would say, but with their nation-state and successive governments. Although the idea would seem most reasonable and accepted by all, the personalization of the conflict continues as if nothing had happened. Attributing character traits to political power is equivalent, for example, to diluting the role of president of the United States in a certain personality: authoritarian, sexist, brute, narcissistic, slanderous, arrogant, stupid; or if you prefer, smiling, collectivist and affable, friend of immigrants, war-abolishing, “dialoguer” and social-civilist. There are people like that or who bear that image, although they don’t always deserve it.

In any case, attributes of this type don’t explain, say, that the German nation followed Hitler. To consider Nazism as the collective madness unleashed by a psychiatric leader or, on the contrary, by the good man adorned by a paragon of virtues, Franklin Delano Roosevelt, as the embodiment of justice, totally lacks explanatory power, if it’s about politics. Otherwise, it will be difficult to understand that Donald Trump ends his mandate without having programmed (firmly) the dropping of several atomic bombs on another great nation (as FDR did); or that the brave civil rights fighter Bob Kennedy had something to do with paramilitary actions, incendiary bombs, machine-gunned farmers and fishermen in cities and fields on the island. “Nothing personal, just business,” as Vito Andolini, a native of Corleone, Sicily, would say.

Deciphering the reason of State from morality is not understanding it, Niccolo Machiavelli said to Lorenzo de Medici. Of course, that reason of State can be very cynical and atrocious, but you don’t gain much by simply condemning it, if it were to reason about it and glimpse what it proposes. Yes, because understanding a conflict between nation-states, like almost anything else, is measured by the ability to calculate what should come next, even if it isn’t in the extreme of “the possible,” but in the range of “the probable.”

In order not to constantly make mistakes in what is coming, and to identify the factors that keep the conflict alive, it is useful to begin by understanding the nature of politics: that of the United States, that of Cuba, that of any country. As almost always happens with the black box part of all processes, it is normal that there aren’t enough facts. “In politics, what is real is what cannot be seen,” Martí tells us.

This lack of clarity gives rise to all kinds of superficialities, particularly those that are built on “politics is conspiracy” and “politics is concentrated ideology.” In other words: “The twin towers were downed by the CIA,” “Cuban State Security must have known about the sonic attacks (those were the North Koreans),” “it’s impossible for a black man to be president,” “if The New York Times, CNN and all the mainstream media are against him, how can he beat Hillary?”.… Of course there are conspiracies and ideologies, but the architecture of politics is not revealed by the Da Vinci Code, speeches or editorials nowhere, but the dynamics of interests and values. Forgetting it involves making mistakes over and over again, as can be seen.

Hence, Cuba-U.S. relations in the last 60 years, crossed as they have been by all kinds of conspiracies and ideological polarities, are only rationally explained if it is known that they have always included dialogue, understanding and cooperation. As Leogrande and Kornbluh demonstrate, based on declassified documents, the Cuban leadership did not stop responding to any U.S. signal to dialogue, negotiate or agree on anything of common interest, without excluding the most tenacious Republican administrations: Nixon-Kissinger, Reagan, G.H. Bush and G.W. Bush.

This means that conflict and cooperation have not taken place in a linear sequence, which led to cooperation when the Interests Sections were established (1977) or diplomatic normalization was agreed on 17D (2014), rather, they have accompanied relations, and they have almost always acted in parallel, with contradictory and zigzagging results. Appreciating relations in this way allows us to recognize their complexity, instead of attributing the contradictions to the classic god mounted on a machine that descends through a window. It is not an aberration; it’s that way and probably still is.

With these conditions, and to make a pause in this talk without a didactic purpose (and without rushing to meet the teaching program), it would be necessary to return to the nature of the conflict.

If it was triggered by the Agrarian Reform Law (May 1959), just five months after the taking over power, when the Soviet Union didn’t fully understand what was happening in Cuba, and the Popular Socialist Party still called it “the January revolution,” the cause of everything was the expropriation of the United Fruit’s large estates? Is that the egg of the huge conflict? What came next, the spiral that led to the civil war, the organized violence on the Bay of Pigs scale, months before the nationalizations of the summer and October 1960, was it because of those first expropriations? Was it the anti-communism of a Cuban upper class and an American government that saw the hammer and sickle silhouette behind any moderate reform? Is there an explanation that goes beyond listing “nationalizations” and attributing the root cause to “imperialist ideology”?

This, which may seem like a history lesson, is key to understanding the conflict here and now, and also to thinking about its horizon, as will be seen very soon.