The constitutional right to peaceful demonstration is not enough, it is necessary to legislate it and understand that the street belongs to all Cubans, who have the right to express themselves and the duty to not use violence. 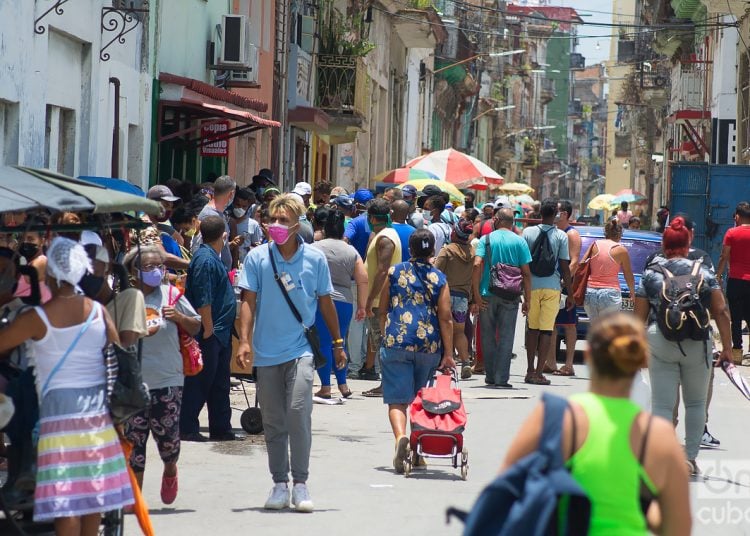 I have been living between Cuba and Brazil for about four years for study purposes. My last stay on the island lasted about two years, between 2019 and 2021. In the last six months in Cuba I have tried to connect with the deep reality of the “marginal”(ized) barrio, of the tenement house where I live. I have wanted, in the midst of my personal challenges, to better understand that fraction of the diasporic country in which I am (absent), which constantly surpasses my imagination and experiences from the potential of the diverse. I don’t think I will be able to understand the complexity of the people around me, of the streets that I walk, of the feelings that surround me, that make me suffer, cry and love…but I need to understand (myself).

After two years of being back home, the family’s affection welcomed me with roast pork and congrí, Tínima beer and Los Van Van. My mother, my sister, made sure to provide the fridge with the essentials, they wanted me to inhabit an imagined country, at least basically like the one I had left in 2019. Unlike Bolsonaro’s health necropolicy that I experienced, in a Brazil of supplied markets, it was encouraging to see Dr. Durán transmitting tranquility and the Cuban government working for a decent life in the midst of so many deficiencies.

However, after spending a month and consuming/distributing the reserves from beyond that the Cuban Customs and Copa airlines allowed me, the super-anxiety due to the danger of infecting myself and (seeing) people dying of COVID-19 in Brazil, was replaced by a basic anxiety, the search and prices of pork, coffee, food, vegetables, bread, milk, medicines, and the lines with their anthropological effects.

My mother, my grandmother Fela and my neighbor Belkis were delighted with the increase in their pensions, but the speed with which the shortages appeared and prices increased quickly froze their smiles. At the same time, the government organized modules of basic products with a monthly distribution and accessible to each family, which has been relevant and necessary. I have not seen anyone starve to death on the streets, although I know of more than one child/teenager eating one meal a day, being semi-hungry the rest of the time, dreaming of a cracker or their mouths watering for a Pelly.

Adolescents/young people from the barrios that I inhabit in and that inhabit me have seen their spaces for socializing reduced to the families with their dysfunctionalities, a concept that is expressed daily in a diminished capacity to resolve conflicts, exacerbated by the effects of patriarchy that induces toxic masculinity, alcohol and physical-psychological violence against mothers/women and children.

The kids from the barrio (de)build the world they dream of for them on the (anti)social networks and from there they answer the mass (in)communication media, which often make them invisible. Others less fortunate are exponents of the internal technological gap, without a telephone to inhabit the social networks that (dis)connect you to the world; they dream the dreams of others, without critical recourse, in a single, totalizing narrative of their lives in a fraternal global network that unites them in their joys, wishes and sufferings.

The influence of the school and its teachers during the pandemic limited to occasional homework sent by WhatsApp or Telegram (for those who have a cell phone) and to some educational tele classes, which make them sleepy because of their schematic and repetitive level (for those who have a television). Institutionalized formal education, after two intermittent courses due to the pandemic, moves further away from the horizon of a part of the youth/adolescence, although in truth it has always been far from understanding their diversity, their tribes, their reggaeton idols and the body language of resistance to the rhythm of Chocolate MC. The persistent meritocratic spirit in the Cuban socialist school maintains that we can all achieve social success through universal access to education; the untold story is under what conditions I study and what class, racial, structural, family barriers I will have to challenge in order to achieve success and social mobility.

With the arrival of the blackouts, the occupation of bodies in the street and the corridors of the tenement houses increase, the most complex issues are settled, postponed demands are mobilized, the bustle of the house is transferred to the public space and agendas and dissatisfactions are generated or structured there. If those who govern by mandate of the people want to know more than what the Population Attention Offices inform them, they must take advantage of the circumstances and walk the unlit streets that are illuminated with wisdom, popular clamor, dignity and indignation.

As the months and difficulties go by, and with the surge of the pandemic, the increase in interpersonal, family and neighborhood tensions is remarkable for me. The embargo and its effects are an unavoidable reality, its elimination should be a reason for consensus among Cubans of any political creed, as a fair point of credibility for any dialogue from the difference. To withdraw from any call to violence, incitement to hatred, reinforcement of discriminatory discursive codes that inferiorize specific social groups. Dialogue and reflection must be the way, not foolish and unjustified destruction.

People in the “marginal”(ized) barrios resist, work, rise in the face of their contradictions and others that are generated in them, get tired, persist in multiple deafness and multiple discrimination and can be violent like any other. They also protest peacefully and have the capacity to be respected and respectful interlocutors.

I do not accept the essentialism and the dichotomous trivialization that the compatriots who took to the streets on J-11 or are simple criminals, marginal beings, vandals, agents of foreign change. Or from the other binary shore, that they are the anti-communist heroes, the revolutionary stone-throwers of the occasion that will hit certain Cubans who do not commit to the glamorous future in a post-communist Cuba.

However, given that the elimination of the blockade/embargo doesn’t seem to be among Biden’s priorities or of a part of the Cuban exile community, today it is up to the Cuban government and those interested in a Cuba with a minimum of well-being to carry the cross on their shoulders and walk. For this, based on my experience, I believe it is essential to move forward in a credible way in an environment of tolerance and mutual respect. The insolence, the individual and social arrogance turned into a media discourse of (counter)revolutionary intransigence, must give way to attitudes of humility and communion. Letting go of the unnecessary I do fight for the permanent I do hug you, and that this does not imply forcing anyone to abandon their ideas.

Discussing ideas is easier than controlling sticks and stones, let’s discuss…we must really promote a culture of diversity, a common pedagogy of doing critical politics as an active subject, not just criticizing politics as a passive entity. But it’s even necessary to be willing to accept that whoever is not an active subject in politics does not have to give up their inalienable right to participate in political decisions. The constitutional right of peaceful demonstration is not enough, it is necessary to legislate it and understand that the street belongs to all Cubans, who have the right to express themselves and the duty to not use violence.

As Díaz-Canel said last July 14, it’s necessary to get into the barrios — in the humblest barrios — which are the ones that sustain the greatest impact of social disadvantage. But it’s necessary to get involved to build and learn with the barrio, not to impose hygienist and colonizing visions that take away the voice and leadership of the barrio’s natural leaders. It’s necessary to invest in the solidarity, popular and community economy, in financially and technologically supporting the creation of barrio cooperatives that generate jobs and monetary returns among the neediest.

Support adolescents and young people with technological and internet packages based on teaching and training. Generate supportive and inclusive entrepreneurship training to boost their leadership in small business networks of commerce and food production in disadvantaged barrios. Reorient international solidarity aid, from the Cuban diaspora and foreign investments to generate economic, social and educational policies of social and racial affirmation focused on marginalized barrios.

Rage and hatred are not going to consume us, I have faith that Cachita (Our Lady of Charity and Cuba’s patron saint) is enlightening me (us) and I trust her. There is much to do, from the inside or from the outside, whether or not you are a communist, always a patriot, a Cuban.

Let’s build together a place to dream, live and love.