Effective solutions that seek to revitalize national production, at whatever scale and under any form of approved ownership, are still pending. 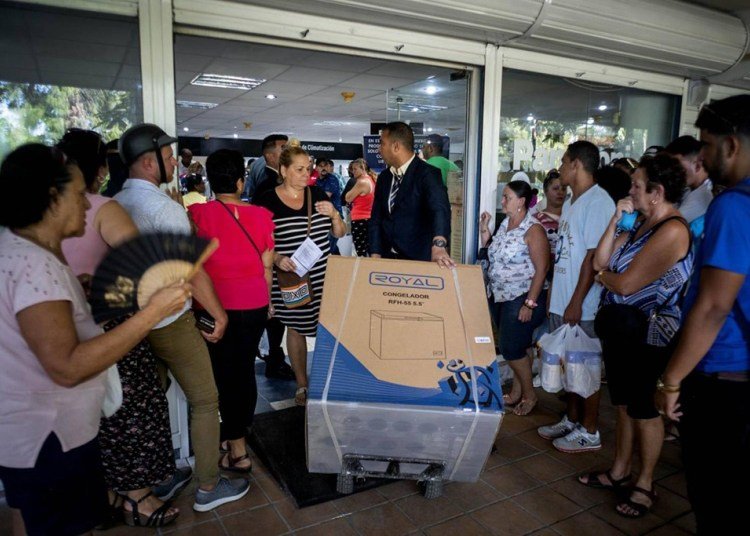 We already saw how the need arose to implement a partial dollarization of the economy. First, to have the necessary fresh foreign currencies to restock the currency collection stores (TRDs) without waiting for the country’s central liquidity (CL) allocations, nor the fear that CUCs are being collected without full backing in foreign currencies while not having to spend freely convertible currencies for the purchase of products to be sold.

The measure also came as a result of the manifest evidence―already pointed out by many economists―of the exodus of capital to other countries, increased since the approval of changes in the migration and travel policy. To counteract this practice of exporting capital and importing merchandise that would later be marketed by individuals, as well as the power of the State to obtain benefits, it was also necessary to review the pricing policy for this type of sales using debit cards in dollars, applying lower coefficients for purchase prices to form the final sales prices.

Otherwise, you could not compete with the prices of individuals, even with all the disadvantages they have to develop this activity compared to the state business apparatus. The measure has been justified as a way to obtain resources to finance or strengthen the national industry.

Let’s take a quick look at this goal, not clear enough.

First, this assertion comes to reaffirm the above: the CUCs obtained by the national industry, through its sales to the TRDs, or that could be contributed by the national banks or by the Ministry of Economy and Planning, are not backed by foreign exchange. They have become, like the CUP, a currency that is not totally desired or devalued. There are considerable savings in CUC, but if it is not accompanied by CL (control of the liquidity capacity of the country) it does not serve to strengthen the industry with new investments, and even to import raw materials to keep it running at the levels of previous years.

Therefore, if the currency market is now in shock, people flock to try to buy those foreign currencies, either through official or alternative channels. If the CADECA exchange houses suspend the sale of foreign currency to the population (as is already known, it is only authorized in international airports and with the pass on board), it is not because these measures have been stipulated for the sale of products through debit cards in dollars and supposedly the population is massively acquiring them to buy products in these stores, but because it is clear―and this is how people interpret it―that the CUCs have been losing the backing they previously had in foreign currencies, and that this new measure is the first in a series of decisions that could lead to the CUC’s gradual devaluation or its disappearance.

Many argue that what is happening in the foreign exchange market is “because of” the new measure to sell in dollars. But the CUC has actually been losing its value since long before: since its issuance without absolute backing or the indiscriminate use of the foreign currencies captured by the State when the latter are withdrawn from the monetary circulation. The new measure only formalizes the loss of value of the CUC or is the start of its devaluation. Yes: there is a new dollarization of the economy, no matter if it is partial and without the use of cash. It has been imposed by reality, because the national currency created at the time for the foreign exchange market (the CUC) has stopped playing its role.

We share the opinion of Pedro Monreal in Remesas para la inversión industrial: ¿es necesaria una ‘carambola’ comercial?, in which data is provided on the Cuban industry’s contribution to the GDP. In the absence of official data, investment needs are estimated to be a volume of sales and profits in dollar stores: “the foreign currencies that could be collected through sales to support the industries,” concludes the author, “would certainly play a positive role, but very distant from the amounts required to ‘boost’ the national industry.”

But there is also an additional problem to that of the volume of profits to be collected in USD and the needs of the industry: how and for what purposes to channel the foreign currencies.

The first products marketed in the new sales channel have been those that had been most imported and sold by individuals, especially in values: electric motorcycles, refrigerators, freezers, air conditioners, splits, washing machines with dryers, flat screen TVs and spare parts for cars. But not of any quality, but of the highest gamut, as explained in the Mesa Redonda TV program.

In concrete, not a small refrigerator, but those with two doors or larger; neither small screen televisions, but with much larger screens and better technology (LED). The other product gamut would continue to be marketed in CUC. Although in Cuba there are industries that produce electric motorcycles, refrigerators and air conditioners―to name just three examples―it was expected that so far these industries were able to produce goods for a market with lower purchasing power.

Overcome the surprise at the opening of these stores, some defend the initiative, while others reject it under the argument that it benefits a privileged sector of Cuban society. But what could be its effects on the island’s economy?

The following could be observed: a new sales in dollar mechanism is implemented to ensure the resupply of this new sales channel. No agile and efficient solutions have been found to transfer CL of the TRDs to operating enterprises, which produce for the market in CUC―for example, beers, soft drinks or meat products for tourism. However, they do approve the use of dollars to modernize industries that have not yet proven that they can compete with products imported from recognized international brands or to produce for the market in CUC.

Nor has it been clearly explained which industries will be revitalized with the help of dollar profits to be obtained through the new sales channel. The variants described on the possible use of dollars leave doubts about the effectiveness of this purpose.

Another aspect that may not have been given due attention is that of cash dollars and the application of the tax. It has been said that the 10% tax is required, which is deposited in cash, because it is expensive and complicated for Cuba to take dollars out and deposit them in foreign accounts, as a result of the U.S. government persecution of banks willing to collaborate with Cuba. The measure was justified as it tried to ensure that foreign exchange flows to the country come in currencies alternative to the dollar and thus combat the harmful effects of the blockade.

However, in today’s Cuba the situation in the foreign exchange market is different. There is an unsatisfied demand to acquire foreign currencies in the CADECAs. If the population could acquire dollars in the CADECAs, that cash would not have to be sent to foreign banks, so there would also be no need to collect the 10% tax to compensate for its handling abroad. That income would not be levied, but in addition to saving the cost of its transportation and deposit abroad, one would expect a greater flow of dollar income in the CADECAs.

This would be a way of combating the informal market in this currency and a differential would be obtained for the exchange and re-exchange to individuals. The buying and selling differential could be even broader―specifically for the USD/CUC pair―compared to that used for other international currencies, offsetting the risk that a certain volume of cash would have to be sent abroad.

The fundamental thing is that there should be an increase in dollar income in the CADECAs, which is currently being exchanged in the informal market. Is the income that is perceived by the tax on the dollar so important or is it derisory because almost nobody takes it to the CADECAs or the banking system? When the tax doesn’t play the role for which it was created (if it really was not necessary to transport so much cash in USD abroad) a question arises: what is more important: to limit the population’s possibility of changing their CUC into dollars or to combat the informal market and, at the same time, raise the profits of the CADECAs through its participation in the exchange/re-exchange of currencies?

Changing the subject, I was among those who were glad to see Minister of Foreign Trade and Investment Rodrigo Malmierca speak at the Mesa Redonda about the possibility of going to foreign trade companies to request and contract the import of certain goods that are not even found in the stores in CUC, or in the ones of a new type. I imagined a new channel so that, for example, the guy in the corner of my house who fixes flat tires could import a more modern machinery to do the job or the shoemaker a sophisticated machine to sew shoes…revitalizing the small industry and self-employment.

But the next day I was disappointed when it was specified that nothing would be done for “people to do business,” and that it was only to be able to request products from the same brands, already sold in stores, for a gamut of exceptional products.

Not only do I not imagine how many requests of this type these foreign trade enterprises will receive in the year to set up an entire, expensive and new mechanism for this purpose. We continue to use patching up instead of finding effective solutions that seek to revitalize national production, at whatever scale and under any form of approved ownership.

There is much debate about whether this new measure is getting closer or moving away from monetary unification, and what impact it could have on it. In my opinion, it seeks a solution to urgent problems and seeks to combat the exodus of foreign exchange and the massive import of foreign products by individuals. And it also tries to find a solution to the replacement and continuous sale of products, beyond the liquidity approvals, to exchange in foreign currency the CUC obtained by the TRDs. But hopefully it can influence the future, in one direction or another, on the issue of monetary unification.

If, for example, more and more products are sold in dollars and are eliminated from the sale in CUC, there is no doubt that the process will make it easier to eliminate the CUC from monetary circulation. But…will telecommunications, the TRDs and banks be prepared for an exponential increase in the sales volume through debit cards? Will the use of the CUP be allowed in these stores, which initially only sold their products in dollars? If in the end there is only the CUP in cash and the sales in dollars through cards, monetary unification has not yet been achieved. There would still be two currencies in circulation, although one of them does not circulate in cash.

Finally, I repeat it again: without a financial reform that is accompanied by a serious productive reform, that is, that encourages production through all the approved productive forms―state, private, cooperative―, it will be very difficult to get out of the crisis that Cuba is experiencing. And moreover: if one does not think quickly about small and medium enterprises, it is difficult to think about the necessary state business reform. I will not deal in depth on the devaluation of the business exchange rate that must come now, or when it is decided, because of the effects it would have on the entire national economy.