A Pirate to conquer Japan 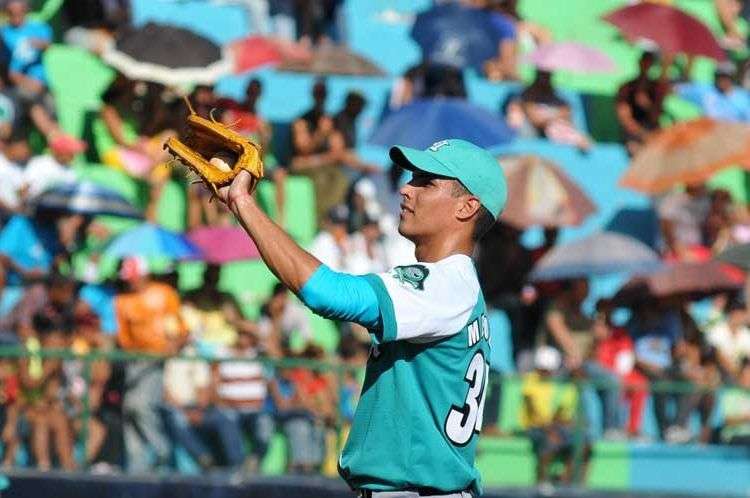 (“I also have in my aspirations to grow as a pitcher, I still have to learn and know that I can get many tools there” / Photo: Gerardo Cruz Mayet.)

With the same ease with which he exceeds the 90 miles per hour with his pitches, he receives me. Barley 20 years old and he has the security and confidence of a consecrated, and this, in addition to his physical potential, draws attention to those who know him.

Hector Mendoza Ripoll, one of the greatest Cuban pitching prospects, has signed a contract with the organization of the Yomiuri Giants, to play in Major League Baseball in Japan, becoming the fourth Cuban player who will go to the Land of the Rising Sun in 2014.

From the Special Municipality of Isle of Youth, and a successful transit through the sports, he stunned the Asian scouts with his fearsome speed that reached 96 miles and especially working with equanimity even in difficult situations.

You’ll play in the second best baseball league in the world, what are your expectations?

“First to contribute to the team, is the function for which they hire me and the first goal line whenever I walk into a baseball field.

“I also have in my aspirations to grow as a pitcher, I still have to learn and know that I can get many tools there”

And what about the exchange with representatives of the team?

“They have been quite interested and at all times they tell me to have patience and discipline to achieve my goals, start playing for the second team of the organization with the aim of my adapting to the league,” said Mendoza.

Added to his youth, six feet three inches tall and 80 kilograms of weight, he has a terrifying fastball that for three straight seasons with the Pirates of the island has brought pressure to opposing hitters; undoubtedly a diamond the Yomiuri entrepreneurs were interested in polishing.

With this addition the Japanese franchise performed an experiment to also take Carlos Luis Soto, who has been responsible for the preparation of Mendoza in his three seasons with the filibuster troops.

Undoubtedly, it is a smart decision to work with a talent of these conditions, who now has to deal with two different leagues, but he can take the best of both to become a star of the mound.

You do not go alone to Japan …

“I’ll be more comfortable and relaxed if I can work with ‘Carlito’ they have at all times wanted to create a good atmosphere for me so I can give the best of me and his presence will help me feel confident.”

To his physical condition, Hector adds his own personality that helps him deal with complex situations with cool head on the mound, he still needs to win control, incorporate other pitches to his repertoire and improve the tactical technical thinking.

How does Hector make outs?

“Working with fastballs, sliders and I’m using the change-up, but I still need to have a better command of them and especially the strike zone, which in the National Series varies greatly from one referee to another.

“I would like to incorporate other pitches but rather work initially in control, because when you manage to put the ball where you want you can reduce the opponent’s offense without many types of pitches.”

And what do you have to say about the change from Gerona to Tokyo?

“The change will be abrupt but resistible, they are different environments, but I am going with my goals and I’m focused on that, I would like other young people to have a chance, there are guys like Norge Luis Ruiz and Yaisel Sierra, just to mention two, which can grow well as pitchers working in Japan, I hope they also get the chance.”
You have a professional league contract, what do you think of this for a 20 year old Cuban?

“Doing it right above all, Cubans have much pride, it bothers us to look bad or lose and in baseball a lot more, I will give each day my best, to improve, I will demonstrate that Cuban baseball is still the best in the world, I haven’t left yet and I am already thinking when I come back being a best pitcher to help the Pirates in the 54th National Series “.

* The right-handed has taken part in 3 domestic campaigns with a record of 8 wins and 11 losses, 15 saves and a 2.73 ERA, and in 135 innings he has struck out 96 batters and participated in seven shutouts.