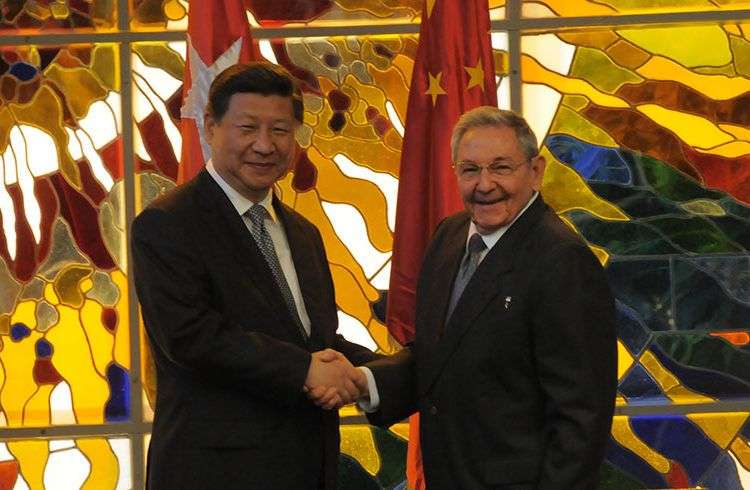 The news still hadn’t “cooled” of the visit of Russian President Vladimir Putin when Xi Jinping, President of the People’s Republic of China, arrives and negotiates with the Government of the island 29 agreements, relevant to the national economy.

The main ones were around four major issues: credit, telecommunications, science and industry, although sectors such as education and culture will also benefit.
Some of the most significant agreements were the provision of a concessional credit line for the construction of a “multi-terminal” on the Guillermón Moncada port of Santiago de Cuba, postponing payment for 10 years of the Cuban debt, free of interest, transfer of credits to buy equipment to develop telecommunications and three biopesticides production plants and a high security laboratory, as well as other credit – “government” and “interest free” – for the implementation of other projects or supplies of materials and equipment.

At the industrial level, one of the most attractive for foreign investment, they agreed on drilling oil wells up to 9000 meters deep and the participation of the National Oil Corporation of China in the recovery of crude oil in the Seboruco site; exchange and industrial cooperation in particular in the industries of machinery, metallurgy, light, chemical and electronics; and commercial contracts for the supply of nickel sinter and nickel sulfide, both for 5 years.

For agriculture, one of the economic sectors hardest hit by the Special Period, blocking and unproductive, a commitment to the creation of a farm aims to “promote livestock development was signed; and cooperation between the two countries centers for science and technology Moringa, Mulberry and Silkworm in the Sericulture Project in Cuba. ”

For agriculture, one of the economic sectors hardest hit by the Special Period, the US blockade and unproductiveness, a commitment to the creation of a farm aimed at “promoting livestock development; and cooperation between the two countries centers for science and technology of Moringa, Mulberry and Silkworm in the Sericulture Project in Cuba. ”

It was also approved a protocol on the quality and safety of tobacco exported to China and a memorandum to expand cooperation in similar cases in the export of raw sugar.

In the scientific area nations deepened cooperation in research, development and industrialization of biotechnology, signed a memorandum on the sector of renewable energy and one for health, in addition to agreeing a donation of environmental monitoring equipment between Ministry of Environmental Protection of China and the Ministry of Science, Technology and Environment of Cuba.

In the scientific area they deepened cooperation in research, development and industrialization of biotechnology, signed a memorandum on the sector of renewable energy and one for health, in addition to agreeing a donation of environmental monitoring equipment between the Ministry of Environmental Protection of China and the Ministry of Science, Technology and Environment of Cuba.

It was also agreed the implementing of the project of construction of aseptic packaging lines and Doy-Pack for canned fruit in the Ciego de Ávila factory, the supply of equipment for the deployment of digital TV as well as providing water measurement equipment for water supply network of the provincial capitals and the donation of office equipment and transportation.

The Chinese president arrived in Cuba on Monday night after an official tour of Brazil, where he was at the summit of the BRICS (Brazil, Russia, India, China and South Africa), and Argentina and Venezuela. He was received by the First Vice President of the Councils of State and Ministers of Cuba, Miguel Diaz-Canel.

On Tuesday he met with Cuban President Raul Castro, who presented him in official ceremony the José Martí National Order, the highest honor awarded by the Republic of Cuba. After the ceremony, the 29 cooperation agreements were signed.

That same day, he held talks with Cuban president Fidel Castro, with whom he reflected on “the international situation,” the challenges of humanity and the BRICS Summit. At night he attended a special ballet performance with representatives of national dance schools in both countries.

On Wednesday he went accompanied by Raúl to Santiago de Cuba where, according to local media they visited the Santa Ifigenia cemetery, where the remains of the Cuban Jose Marti lay; the July 26 School City, former Moncada garrison; and the old town hall, now the seat of the Municipal Assembly of the People’s Power.

In a message delivered by Jinping to Cuban press he called Cuba “a country of weight” in Latin America and the Caribbean, recalls that in 1960 this was the first nation in the region to establish diplomatic relations with China, and believes that updating the Cuban economic model can provide important new development opportunities for Sino-Cuban ties.

A parallel agenda to the Chinese President´s the group of businessmen from his country who accompanied him had. Among these activities was the opening of a biosensors production plant that will benefit more than 800,000 diabetic patients of the Island

According to Xinhua, the official statistics show that bilateral trade grew by 7.9 per cent, ie 1,879 million last year and perhaps, after the approval of the Foreign Investment Law, the consolidation of business with Brazil, the condoning of 90 percent of the Soviet debt of Cuba and ten signed agreements with Russia, the new agreements recently signed with China are one of the good news that this summer could bring to the Cuban economy.

A Pirate to conquer Japan