B-Boy Gannicus does not bite on the continental arena

by Aliet Arzola Lima
in Sports
0 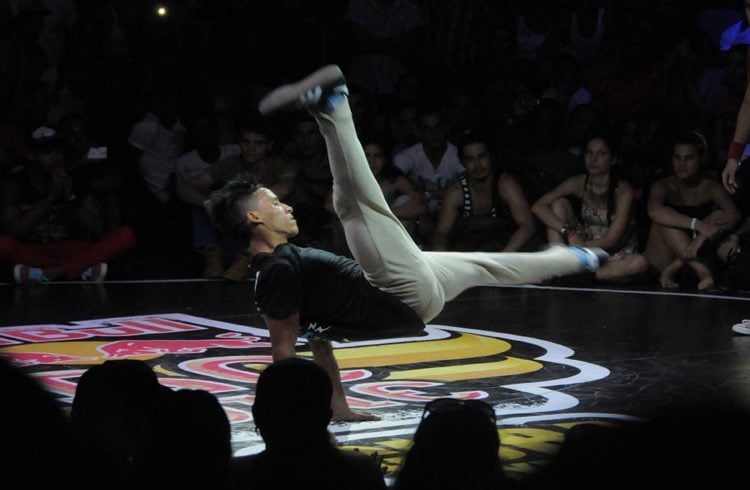 The Cuban B-Boy Gannicus was eliminated in his first battle, but showed a lot of intensity in Brazil / Photo: Roberto Ruiz.

Cuban B-Boy Gannicus traveled to Belém, Brazil, with a suitcase of dreams, ready to break for the first time in the demanding international scenarios of Red Bull BC One Cypher, spectacular competition of break dance which brought together the 16 best exponents of Latin America last weekend.

In Igarapés Park, under the gaze of a thousand spectators, Gannicus deployed his arsenal of spins, footwork and boundless energy, but failed in the initial battle against the Venezuelan B-Boy Kaos, a native of Los Teques.

With more experience and flight hours on universal tracks, Kaos dismantled Gannicus, who still lacks road to get to the highest level of the best B-Boys of the continent, which calls into question the decision of the judges in the Havana event (June, 2014), where other Cuban acrobats presented programs of greater complexity and were cleaner and full of spectacular in executions.

However, the youngster from San Miguel del Padrón, where he began the practice of the discipline just nine years was a worthy representative of Cuba, for he showed personality on the court, despite its predictable inferiority he did not surrender until the verdict final.

Back in the archipelago, Gannicus, who works in construction, will continue in his free time with his passion, which he discovered in 2005 while watching the movie “You Got Served”, from which he learned several steps and began practicing, basically supported in his memory, having no recorder to store the videos.

On the basis of the sacrifice and perseverance, this young Cuban formed the band Gladiators Crew with other lovers dancing boys and Gannicus appointed himself as leader of a rebellion that will continue after his return, with greater intensity and commitment in training and logic improvement in exercise programs during their free time.

The Latin American competition had the Brazilian B-Boy Luan as its monarch, who wowed with his flips and provocative rhythm judges Pelezinho (Brazil), Cico (Italy) and El Niño from the USA.

“When I dance, I cannot think of anything, but before entering a battle I remember everything I went through to get here. Then I wake up and I feel truly alive, “the Brazilian told the media, winning for the second time in the continental lid, inspired by martial arts.

“I’ve been watching martial arts movies since I was a child. Heroes are disciplined, but at the time of need, they decide, “the champion said.

The dancers decide the game

The growing private sector in Cuba

The growing private sector in Cuba

September, a month for documentaries, between homages and traditions