by Aliet Arzola Lima
in Baseball
0 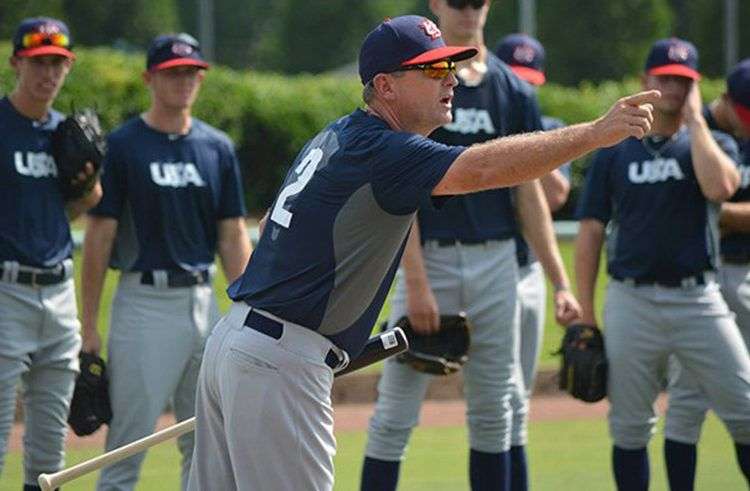 If you check his history, you might think that Dave Van Horn has not been a successful man in baseball. He played just three years in the minor leagues of the United States with branches of the Atlanta Braves, always moving in different scales of Class A.

There he hit very little in his almost fleeting ephemeral passage, and after three seasons without pain or glory he focused on studies. Completed a master’s degree from East Texas in 1992, and gave the first steps in his directing career in college.

That´s a non impressive record of service when compared to the mythical figures of the northern professional baseball: the great sluggers, the indecipherable pitchers, managers of World Series winners.

However, this man, born in Stanton, California, has made a bright path in training and many players agree to describe him as one of the most prestigious mentors of the nation in his category.

To get an idea, in 24 seasons has garnered over a thousand wins and does not reach the 600 losses, with several forays in the World Series of National Collegiate Athletic Association (NCCA) in command of Nebraska Cornhuskers and Arkansas Razorbacks, a team he runs since 2003.

Calm, observant, perceptive, a man of few words, Dave Van Horn visited Cuba leading the U.S. collegiate national team that lost five games to the team managed by Alfonso Urquiola, and never hid his pleasure at the visit to Cuba and play against its players, considering that we have very well earned reputation in international baseball.

“Baseball in Cuba is full of good players, strong, huge, I think they have very well earned their reputation, reinforced by men playing in the major leagues. José Abreu, Yoennis Cespedes, Yasiel Puig, all I see a lot of them on TV and they have undoubtedly revolutionized the majors with their style and strength, “said the coach exclusively for OnCuba.

Were you able to see that Cuban baseball power you are talking about in these matches?

Generally, Cubans showed various weapons, not only that power that has distinguished them throughout history. Now they also showed speed, intelligence, a strong pitching arms full of young players, plus an excellent defense, always well positioned and very aware of what to do with the ball in every circumstance.

For you was all wrong, can it be said that you arrived exhausted to Cuba?

It is true we made an intense competitive journey of more than 20 games in which we faced changes of climate, scenarios, to the point of being in ten different hotels in 12 nights, for example. It was a long time away from home for the boys, some of whom faced their first trip across the Atlantic for the Haarlem Baseball Week. Despite all that, our players responded very well, it is valid to recognize them for their professionalism and dedication in this great experience.

Here we didn’t have good days, we failed a lot on defense, and we missed double play and clear outs opportunities that greatly complicated our pitchers, whose work I consider was remarkable. But you cannot look for justifications; Cuba has its own merits and won by using its weapons perfectly.

From your point of view, what can make this match do for the Cuban players?

I saw many young players, not the usual stars who have represented the country at the World Classics or the Olympics. That detail I think is very positive, because it means development, from every point of view. They also had the opportunity to face our pitchers, which are powerful and will eventually reach the majors, not only for their talent, but also by the physical condition and ability to evolve in the near future. Confronting such men will help the Cubans a lot to grow.

Ítaca Padura and Cantet make their premiere in Venice