by Redacción OnCuba
in Culture
0 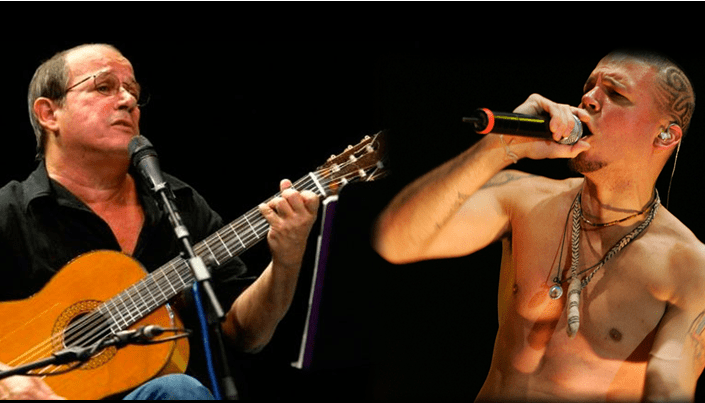 The video clip Ojos Color Sol, linking the poetics of Puerto Rican duo Calle 13 and the Cuban troubadour Silvio Rodríguez was released today on Youtube and was directed by René (Residente) Pérez, lead singer of Calle 13, and his countryman Kacho López.

The single that gives name to this clip came from collaboration with Silvio Rodríguez after the Cuban expressed interest in Mexico in collaborating with Calle 13 for its “creative and nonconformist spirit.”

Before recording the single and the video Silvio was already a big fan of Puerto Rican group “not only for their ideological positions, but also by demonstrating creativity in their albums; (…) I have been a bit like it, I’ve never settled for the first thing that comes to mind, but after exploring other regions I return to the beginning, sometimes that happens.”

For the duo of brothers (Resident and Visitor) Silvio´s collaboration in one of their albums was “almost impossible”, and a current source of pride, because for them “he is someone we greatly admired, as we listened to him since we were kids.”

“I rapped what he had written. Then he read it and smiled. We had no music yet. He recorded something simple and quick with his guitar that served us as a guide to compose, “says René, adding that” the song is based on a day when the sun was not necessary, because the beauty of the world lit the eyes of a person (a woman). ”
On this collaboration, the leaders of the Puerto Rican band stressed that Silvio worked with them with great humbleness. “He joined our proposal so that he almost raps at the end of his verse.”

Ojos Color Sol, which was recorded in Cuba, is from the latest album of Puerto Rican band, Multi Viral. In its filming were involved the Mexican actor Gael García Bernal and Spanish María Valverde, to round out a successful album that Rolling Stone magazine chose among the best of the year.

This song has become, in just over two months since it saw the light in digital format, a favorite of fans of Calle 13, exceeding two million hits and mentions in social networks.

Calle 13, with 19 Latin Grammy awards, is considered one of the most revolutionary hip-hop groups with their irreverent lyrics, deep social commitment, and innovative well-made arrangements.