Cuba wins the title in IV World Series of Boxing 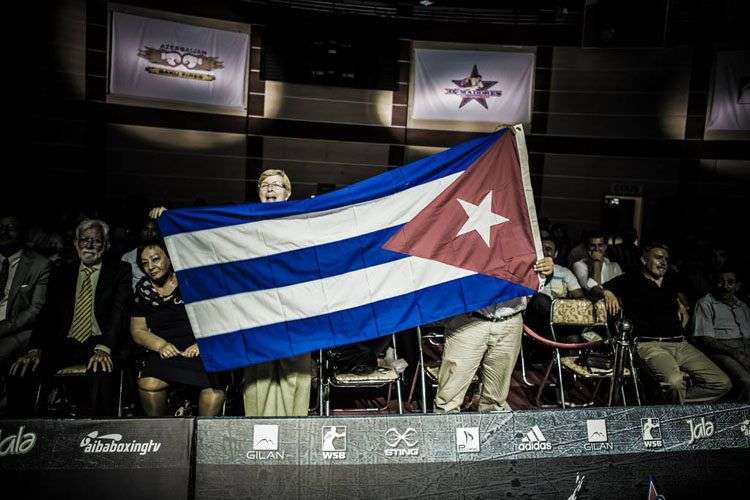 It was necessary to reach the tie break and hold our breath until we saw that there would be no more surprises. Following the unexpected defeat of Alvarez (60 kg) against an opponent to less quality and Larduet´s (+91 Kg) , that not for foreshadowed was less painful and somewhat outrageous as the double world champion had actually won on the ring, the nerves of fans and admirers of the debutante franchisee in the World Series Boxing should be almost at break point; and they thought for minute that the Cuba Domadores, despite the favorable forecasts and demonstrations they made along tournament, could not take the title of Champions.

But the doubt would only last a few minutes. With the favorable final match 5-4 for Baku Fires Julio Cesar la Cruz, also double world champion and perhaps one of the most exotic amateur boxing fighters, entered the ring and delivered a lecture on the Belarusian Mikhail Dauhaliavets to take the unanimous decision victory and perfect score, and thus tied the match and the defuse a little the pressure. And then everything was ready for Arisnoidys Despaigne (69 Kg).

Forecasts announced that perhaps the World Cup runner in Almaty travel in vain, for Cubans should win the crown if they should win the title in ten fights in its six favorite figures did so. But fate and judges, presumably influenced by the audience and condition of the Azeri as hosts, felt it was necessary to settle the title of the fourth installment in the battle of tiebreak, as in the previous edition.

The occasion was an opportunity for Arisnoidys. He started the tournament as the main figureand even triumphed in his three starts, and then he had to give that status to Olympic champion London ’12 Roniel Iglesias, who returned after serving his penalty claiming its status as the best figure in the country in the welterweight division.

However, Despaigne has proved not to be much less or feel second to none and, conscious of the responsibility he had in his fists, went to confront Yauheni Ramashkevich with boundless energy from the starting bell.

The battle between them, both for what it represented as what we saw those five rounds, eventually proved the best of Saturday. Both men threw punches steadily and exchanged roles in their styles, variables of riposte to permanent puncher, conditioned the environment could not presage anything until the judges did not give their verdict favoring the Cuban from the very first round for indeed, as the fight progressed, was having the better of the exchanges. This 3-0 win of Arisnoidys dramatically defined the final score of six wins tight five.

Earlier, Gerardo Cervantes (52 kg) put more effort than in previous presentations, especially in the later rounds, but he was defeated at the hands of Elvin Mamishzada, which always showed his technical superiority. Then Roniel Iglesias, far from his level and speed, got the judges to see him win against Mahamed Nurudzinau, something Lázaro Álvarez and José Ángel Larduet could not get after, despite having done more for the win in the last three rounds of their fights against Russian reinforcement Albert Selimov and Azeri Arslanbek Makhmudov respectively.

Thus, the Domadores became Champions of the IV World Series of Boxing, a title that undoubtedly brings trust to the sports fans and reaffirms Cuba among the powers of the discipline worldwide. Apparently, the “flagship” of Cuban sport will sail again.