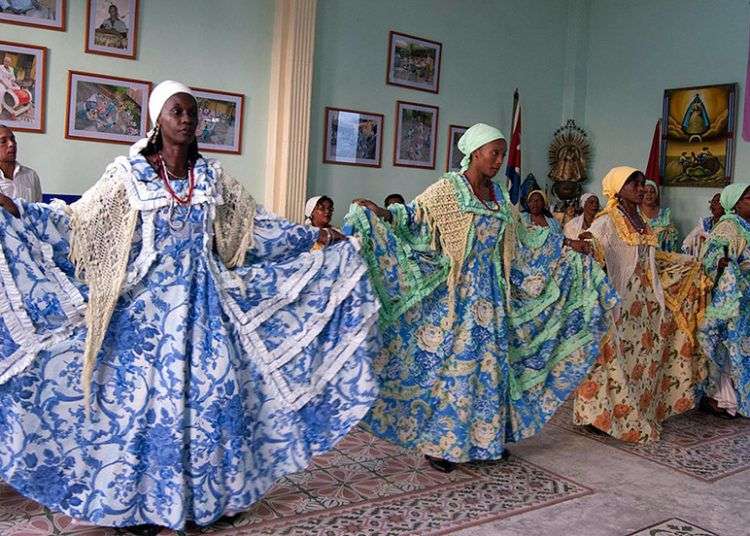 Queli loves candies made with coconut and sesame. Her constant smile foresees an easygoing character, perhaps because of that she looks younger, “let’s not talk about age –women should not be asked about that”. She belongs to the seventh generation of the Venet Danger family, which has kept active the society Tumba francesa La Caridad de Oriente, in the eastern Cuban province of Santiago de Cuba.

She can’t cook yet; she is waiting for her mother to reveal her some secrets treasured for a century and a half. However, she is old enough to undertake certain responsibilities such as “para decirle a usted”: she is Mayora de Plaza, or gobernadora de salón, and in addition she plays the catá drum, a leading instrument in percussion. “Without catá drums there is no tumba francesa”, she said proudly.

These are the same drums since the foundation of the society on February 24, 1862. They are still preserved in perfect conditions, as a live relic, drummers are in charge of repairing and tuning them. It is said that during the independence wars some of those rustic empty trunks were used for transporting weapons.

The party starts, that’s the meaning of tumba: joy, revelry. And it is “French” because of French-Haitian migration by the end of the 18th century, with the start of the revolution in Saint Domingue. Thus, slaves combined the refinement from Versailles court with the African dancing and singing.

Movements are softened with minuet and contredans, with gallant steps, barely lifting the feet from the ground. The friction between the wide skirts becomesa whisper, while the choir is accompanied by marugas with color ribbons.

Then, percussion adds intensity and rhythm, in an unthinkable mix that easily flows and makes people enjoy it. Some specialists believe this centenarian manifestation is an antecedent of guaguancó and Cuban rumba, and has common element with changüí and krewes.

Among the dancers, one is barely high enough to reach his couple’s shoulder, but he holds her hand like a gentleman. That’s Queli’s son, his name is Kevin and he is 8 years old. His age is not important if he was born for that and he proves it in his frenté, “duel” where the dancer and the premier or mother drums challenge each other.

They call “mumbo jumbo” the mixture of creole, Spanish and French that is comprised in their songs. Their songs talk about love, homeland, daily life, sorrows and misfortunes, and satires every Tuesdays and Thursday night.

Today, it is all about happiness at 268, Carnicería Street, a colonial big house where the neighbors watch them perform. “Whoever comes here –says Queli– will find a peaceful, harmonious, spiritual environment”. As it is the tradition, the Cuban flag chairs the hall, along with the Virgin of la Caridad del Cobre, Cuba’s patroness, and portraits of rebel generals.

Cuba wins the title in IV World Series of Boxing

José Luis Rodríguez: The Cuban economy between 2013 and 2014